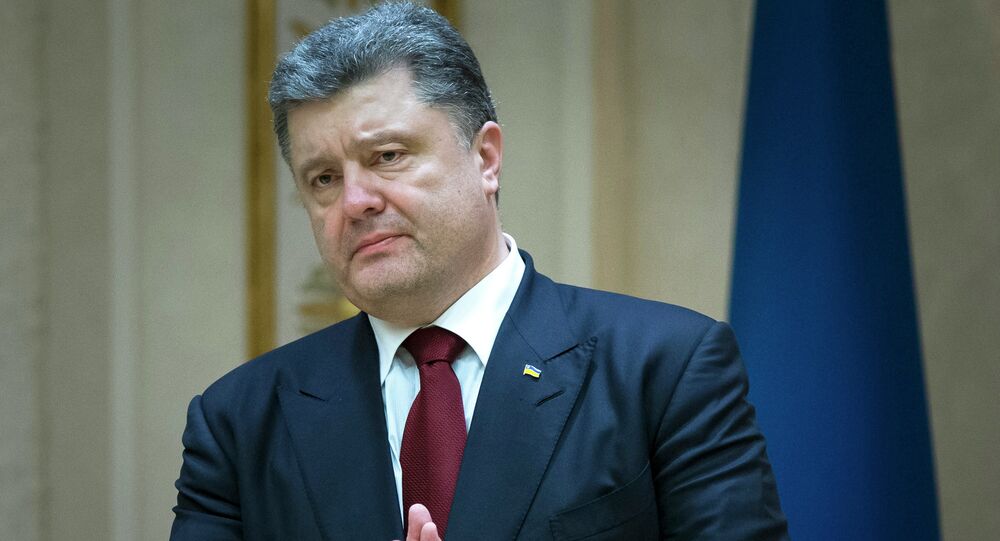 Ukrainian President Petro Poroshenko is an unbelievably weak leader in his nature, American historian Professor Stephen Cohen said. According to him, Poroshenko yields to foreign influence and is incapable of defending his own stance.

According to Cohen, the fact that Russian leader Vladimir Putin was not invited to the talks proves Merkel and Hollande wanted to reprimand Poroshenko.

The professor believes that Poroshenko himself would like to observe the Minsk agreements because he is not a man of war. He has no skills required to be a military commander, he is businessman.

However, far-right radicals which threaten to topple Poroshenko would never let him reach a compromise, Cohen explained.

Former Ukrainian lawmaker Vadim Kolesnichenko underscored that the US was content with Poroshenko, but his time in politics is running out.

"The US appointed Poroshenko because he was the least ambitious of all the 'opposition politicians' who were running for president. During his term, Poroshenko has doubled his wealth. Despite the constitutional requirements, he has not sold his assets and he is still the head of a corporation. Poroshenko realizes his political career would be short," Kolesnichenko told to Sputnik Radio.

"Poroshenko was given some time to make money, but there is nothing for nothing. Poroshenko is personally responsibility for the blood and the military operation in Donbass. However, he would not be able to make a choice to resolve the situation," he added.

According to him, Poroshenko has completed his mission and now the US is preparing a candidate to replace him.

"The US is considering two people to replace Poroshenko – Valentin Nalivaichenko, former head of the Ukrainian Security Service, and Sergei Levochkin, former chief of staff for [toppled Ukrainian president] Viktor Yanukovych. Both are in good standing with the US State Department," the politician said.

He also added that Poroshenko has little support in Ukraine and there is a growing number of those who are discontent with his political course.

© Sputnik / Andrei Stenin
After US 'Leaves Ukraine to Collapse', Russia Will Provide Help
"In Autumn, the Verkhovna Rada [Ukrainian Parliament] plans to impeach Poroshenko. In addition to the situation in Donbass, Ukraine has seen other problems, including the Rusyn issue in the Zakarpattia Region," Kolesnichenko said.

Commenting on the settlement in eastern Ukraine, he hypothesized that Poroshenko’s encirclement would not let him stop the war.

"Maybe, Poroshenko would like to stop the war, but his encirclement is against peace. Two-thirds of the Rada lawmakers are hawks and those who make money on war. Thus, Poroshenko cannot stop the war in Donbass, it is not his prerogative," Kolesnichenko said.

Poroshenko Is Being Russophobic Claiming Threat From East - Lawmaker