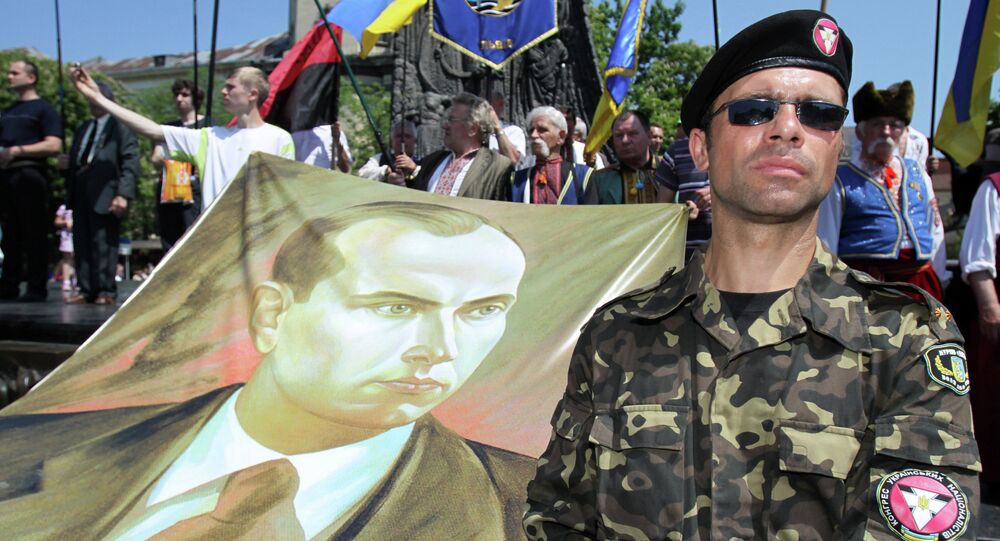 Ukraine has started publishing school notebooks with the image of Stepan Bandera, the notorious founder of the Ukrainian nationalist movement, and Dmytro Yarosh, the current leader of the Right Sector, an ultra-nationalist militant group, according to Ukrainian political scientist Konstantin Bondarenko.

"I'm looking at the portraits of Yarosh and Bandera on school notebooks… I can only say one thing to authors: nice try [to sweet-talk the government]," — the political scientist sarcastically commented.

© AFP 2020 /
From Pegida to Bandera: How Far Right is Acceptable?
Dmytro Yarosh is the leader of the Right Sector, an ultra-nationalist confederation of paramilitaries that was established in November 2013. The Right Sector played a key role in ensuring the success of the Maidan coup d'état in February 2014.

The group later organized a series of "territorial defense battalions," located throughout the country, which have since become known for their brutality in crushing the anti-Maidan protest movement in central and eastern Ukraine.

Donbass residents have accused the group's battalions of committing war crimes during the course of the ongoing civil war in eastern Ukraine. The group's leader, Dmytro Yarosh, has since been wanted by Interpol.