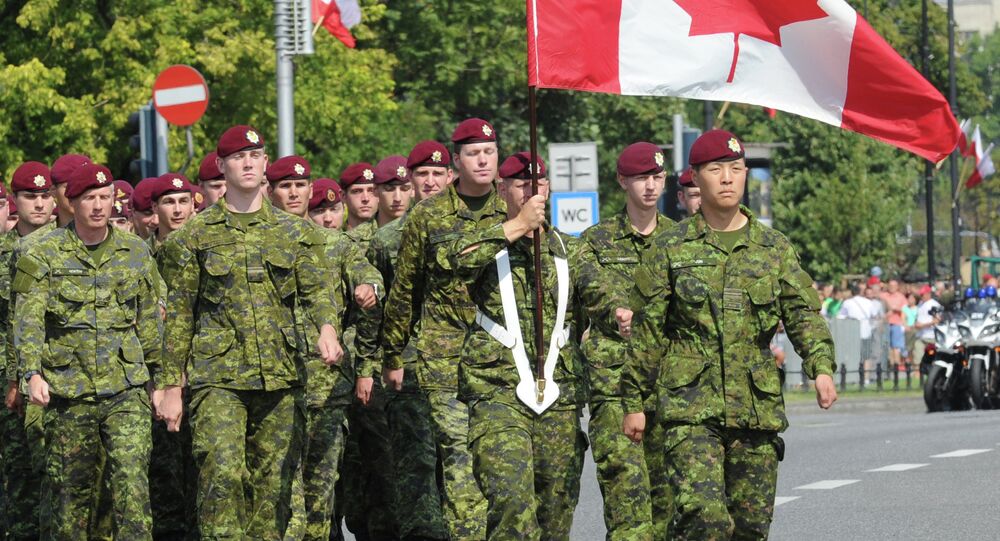 Kiev's Western allies haven't fallen behind in their efforts to train the Ukrainian army to be “acutely ready for fighting a war”; while the US and British military are already on the ground, Canada is now set to field its military training mission to Ukraine in “the middle of summer at the earliest” and in time for its internal electoral battle.

The West has tirelessly lamented that the Ukrainian army “found itself outmatched and out-foxed by separatists at the beginning of the campaign last year”, according to the website of Canada's CTV Television Network.

The Americans and British have already hit the ground with the purpose of making the Ukrainian units "acutely ready" for fighting a war.

© AFP 2021 / GENYA SAVILOV
‘We’ll Teach Americans How to Fight!’ – Azov Regiment
Now Canada has announced that it too is fielding a military training mission to Ukraine by the middle of the summer.

“A planning team sent to iron out the plans arrived only recently, and it could very well be August by the time the contingent is in place,” the website quotes a senior defense source as saying “on condition of anonymity because they weren't authorized to discuss details publicly”.

"Reconnaissance work is ongoing and the training of Ukrainian military personnel will begin later this summer", it also quoted Lauren Armstrong, a spokeswoman for Defense Minister Jason Kenney as saying.

The plan to send 200 troops by March 31, 2017 “to help the country in its efforts to maintain sovereignty, security and stability in the face of Russian aggression” was announced in April by Prime Minister Stephen Harper.

© Sputnik / Alexander Maksimenko
Ukrainian Neo-Nazis Strike Back: Azov Battalion Bashes US Congress
The purpose of the training mission is “to develop and deliver military training and capacity-building programs for Ukrainian forces personnel. CAF members will be deployed on both a sustained and periodic basis depending on the type of training being conducted. Their activities will include explosive ordnance disposal and improvised explosive device disposal training, military police training, medical training, flight safety training, and logistics system modernization training. Canada will also be providing individual and unit tactics training to Ukrainian National Guard personnel along with the United States,” according to the statement on the official website of the politician.

The website however notes that the actual deployment of the mission comes “just as the Harper government prepares to do electoral battle on the campaign trail at home in advance of an Oct. 19 vote”.

There are, however, fears from within the US that the Canadian training mission in Ukraine may unintentionally help neo-Nazis groups.

The move now raises questions about what safeguards Canada has to ensure it doesn’t help extremist groups.

US lawmakers have also voiced concern about American military equipment falling into the wrong hands.

Some US supplies provided to Ukraine’s government have ended up on the black market, according to the US media.