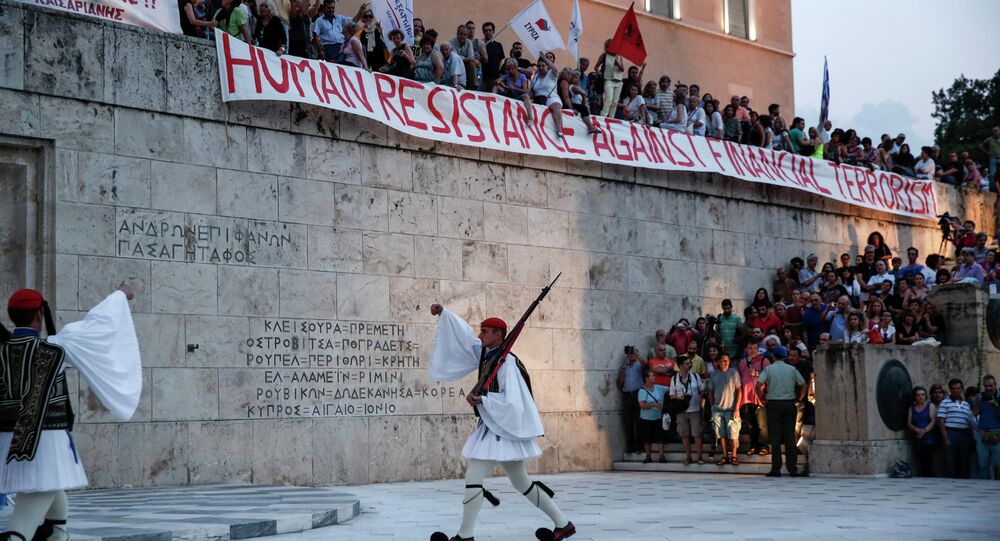 Greece’s radical left lawmakers are firmly opposed to the deal the PM Alexis Tsipras put forward to the pool of international creditors on Monday, marking a significant threat to a successful resolution of the Greek debt crisis.

Kristian Rouz — After the Greek prime minister Alexis Tsipras, leader of the left-wing ruling coalition in Athens, made his offers to Greece's international creditors on Monday, most radical Greek MPs reacted with unbridled criticism of the proposed deal. Domestic support for Tsipras is badly shaken by his willingness to compromise and implement austerity measures, including cuts in government spending. The Tsipras-led coalition, including a wide spectrum of leftists — from Maoists to Social Democrats — may fall apart, having stumbled upon the political reality, which is either a compromise with creditors or the inevitable default.

© AP Photo / Richard Drew
US Stocks Heading for Fresh All-Time Highs as Futures Rise on Greece, Data
The Greek deal proposed by Tsipras to the nation's creditors on Monday may still fall apart, ruining all the optimism it caused in global finance in the past two days. While the European leaders generally welcomed the proposals made by Tsipras, domestic support for the Greek leader is fading. Left-wing Syriza won the latest elections on an anti-austerity ticket, and now that the government in Athens explicitly prefers austerity to default and Grexit, the outrage of most radical MPs, as well as part of general public, is on the rise.

Tsipras' proposals to creditors include an increase in sales tax, hikes in mid- and high-income individuals and introduction of a new tax for enterprises with profits above 500,000 euros a year, as well as the elimination of the early pension schemes,

Tsipras "has to explain to the people why we failed in a negotiation and arrived at this result," deputy parliament speaker Alexios Mitropoulos said. "After five months of negotiations, I consider that, at the very least, the negotiation didn't succeed."

"I believe (the measures) are not in line with the principles of the left. This social carnage… they cannot accept it," he added.

Many Syriza MPs are dissatisfied with tax hikes and cuts in social spending, proposed by Tsipras to the IMF and a pool of European creditors. The Greek lawmakers have taken action to block the Tsipras-proposed initiative, thus possibly undermining the whole deal and ruining the international cheer, triggered by progress in the Greek talks.

If the radical left MPs succeed in undermining Tsipras' efforts in reaching a deal, the prime minister will have to either call for a snap election, a referendum or prepare for a default and reintroduction of the national currency, the drachma.

© AP Photo / Virginia Mayo
Greek Prime Minister Hopes for Reforms Deal With Creditors in Two Days
On Tuesday, Tsipras made efforts to win some support at home by trying to persuade the radical left wing of his coalition that the proposed tax hikes will primarily affect corporations and the wealthiest individuals, benefitting the working class in line with their Socialist ideals. However, the Left Platform, consisting of communists and unionists which occupies some 40 seats in the parliament, may still block the initiative.

The market reaction has been so far favourable. On Tuesday, despite the increasing political turbulence in Athens, Greek bonds rose with the yield on 2-year paper falling 313 basis points to 21.2%. The ASE Index closed 5% higher, extending Monday's gains of 9%.

The domestic opposition for Tsipras' proposal is a significant challenge to the successful resolution of the Greek debt crisis, because the left-wing radicals have been hardline proponents of Grexit and anti-austerity policies, as they believe their mission is countering the "neo-imperialist" ambition of the IMF and European financial institutions. Even though Tsipras still has political resources to push his initiative through any legislative resistance, the domestic struggle will cause new delays, and the creditors might eventually run out of patience, expelling Greece from the euro before Athens pulls itself together.