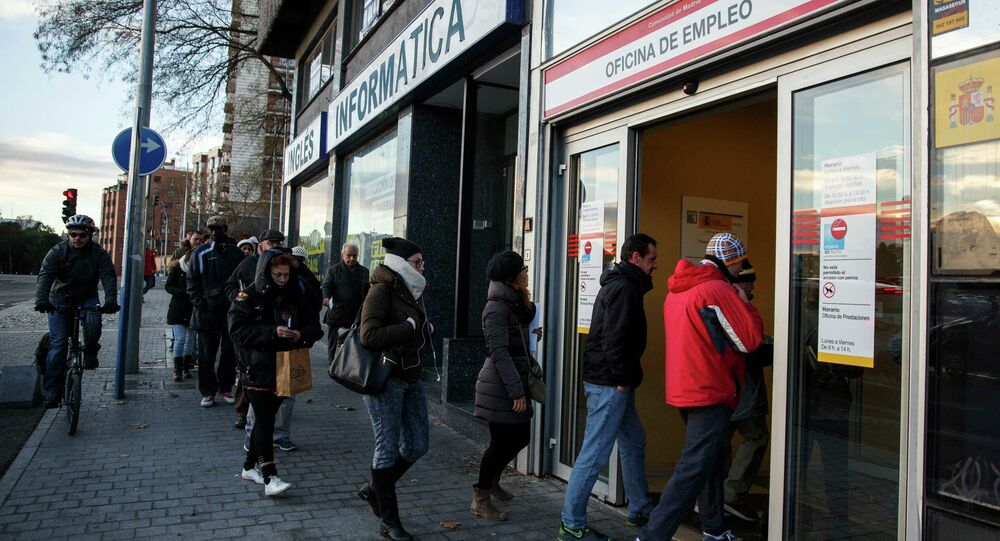 Nearly one in four in Spain are unemployed, and labor experts don't expect the country's prospects to change for the better any time soon.

The Madrid-based Institute's figures showed that the number of jobless rose 30,100 from October to the end of December 2014, bringing the total number of unemployed to 5.46 million people. An earlier forecast by the NSI projected the unemployment rate to fall to 23.53 percent, due to increased hiring in manufacturing, agriculture and construction. Total hires in these three sectors amounted to 82,300, with the service sector suffering a loss of 17,200, but the growth wasn't enough to compensate for the growing labor force.

An earlier report published Tuesday by the International Labor Organization (ILO) expects unemployment to fall to 23.6 percent by the end of 2015, and projects that by 2019 it may fall to 21.49 percent, The Guardian explained.

© Flickr / Driek
Spanish State-Owned Train Operator Cancels Nearly 250 Trains Over Workers Strike
The country's woefully high unemployment rate is down from a high of 25.7 percent in 2013, but remains among the highest in the developed world. The ILO notes that in Europe, only Greece, Bosnia-Herzegovina and Macedonia have higher unemployment rates. Among Spaniards under 25 years old, 53.3 percent remain unable to find work, which Bridgewater Associates investment head Ray Dalio says has led to "a lost generation" which may get caught up in "political extremism," The Irish Times explains.

Spain's five year, financial-crisis and housing-bubble-fueled recession more than tripled its pre-crisis unemployment figures, which stood at 8.4 percent in 2007.

While the country is said to have officially exited its recession in 2013, its Q4 2014 growth rate of 0.5 percent outpaced the Eurozone's 0.2 percent rate; massive unemployment, stagnant wages and now the prospects of deflation have put a damper on the hopes of economists and ordinary citizens alike.

NPR has explained that the prospects of wage cuts, the threat of job loss, and a price war between small businesses are hitting ordinary people hard. Madrid resident Luis Fernandez told NPR that while the economy "is growing [and] the figures say that…it is very slow, really slow."

CNBC points out that the country's CPI slipped to —1 percent in 2014, the lowest figure since July 2009. "While Spain's economic recovery remains solid, its high unemployment and large degree of spare capacity make it vulnerable to a prolonged bout of deflation," Capital Economics economist Johnathan Loynes told CNBC. Economists also fear that a deflation-based delay in increased consumer spending could lead to a deflationary spiral like the one experienced in Japan in the 1990s.

© AP Photo / Manu Fernandez, File
Spanish Socialists Want Princess Cristina Stripped of Dynastic Rights
Deflation also threatens to negatively affect attempts at debt consolidation, both of government and private debt. With Spanish Prime Minister Mariano Rajoy facing political challenges from anti-austerity parties including the leftist Podemos Party during upcoming elections this year, the government may be unable to carry out what are perceived as the necessary austerity measures to deal with growing debt, Dalio notes.

On the plus side, the expected depreciation in exchange rates, and the last six months' drastic decline in oil prices are expected to reduce production costs, make Spanish goods more competitive, and increase consumer spending power, Spanish Secretary of Trade Inigo Fernandez de Mesa told CNBC last week. Rajoy's government projects 2.0 percent growth, along with the creation of about a million jobs between 2014 and 2015, Rajoy told the Spanish news agency EFE earlier this week.

Rajoy's People's Party government has been plagued by corruption scandals and unpopular austerity reforms, including measures which make it easier for employers to fire workers, Business Week has explained.