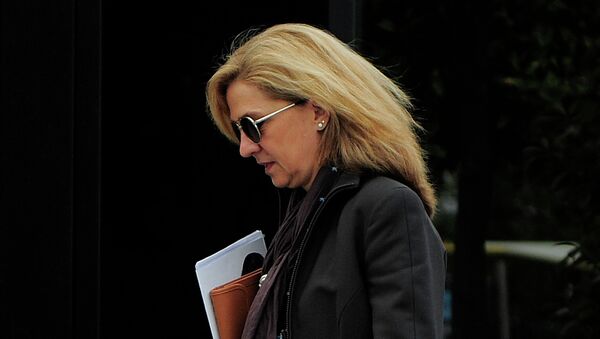 The Spanish Socialist Workers' Party Secretary of Federal Politics Antonio Pradas stated that party has called on King Felipe of Spain to strip Infanta Cristina of her dynastic rights over her involvement in the embezzlement of public funds.

Infanta Cristina of Spain to Be Tried on Tax Offence Charges: Judge
MOSCOW, December 29 (Sputnik) – The Spanish Socialist Workers' Party (PSOE) has called on King Felipe of Spain to strip Infanta Cristina of her dynastic rights over her involvement in a scndal over the embezzlement of public funds, PSOE's Secretary of Federal Politics Antonio Pradas said Monday.

"This affects the whole monarchy, and it is within it where such a decision should be taken," Paradas was quoted as saying by Europa Press.

Paradas pointed out that the King should have "a special role" in this matter.

On December 22, it was announced that the Spanish Duchess of Palma de Mallorca, Infanta Cristina, was to be tried on two tax offense charges. Infanta Cristina was put on trial based on evidence that she was involved in fraudulent activities carried out by her husband Inaki Urdangain, who was accused of embezzling $7.3 million in public funds from the non-profit Noos Institute through a company owned by the royal couple. He now faces up to 19 years in jail and a $4.3 million fine.

The duchess tried to avoid charges by paying 587,000 euros ($729,000) in a public liability bond, as she indirectly benefited from her husband's wrongdoing.