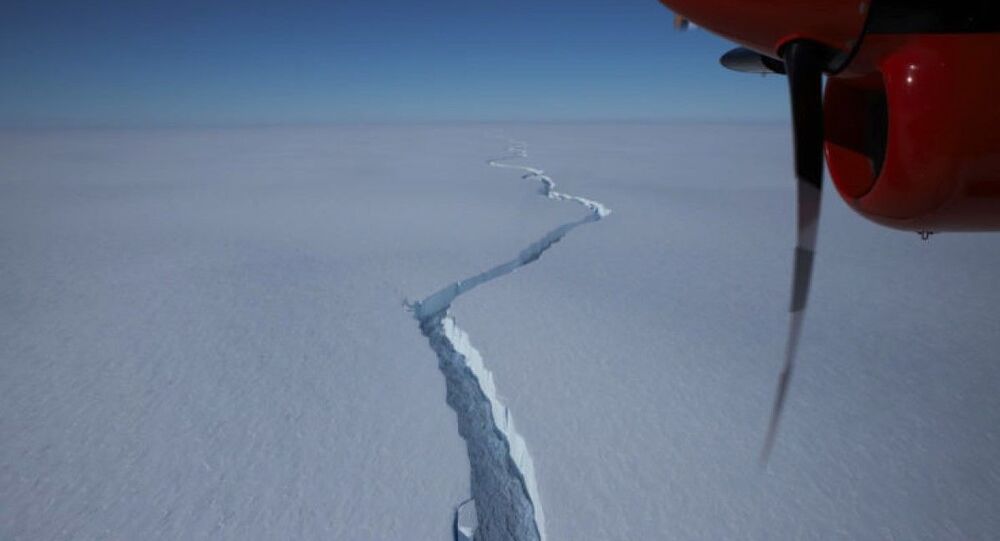 Studies by NASA and other researchers have found that warming ocean temperatures are responsible for melting more of the ice in polar ice shelves than are calving events, when pieces break off to become icebergs.

A colossal piece of ice has broken off an Antarctic glacier and is now floating into the Atlantic Ocean. According to British scientists, the snap has been building for more than a decade.

Scientists at the British Antarctic Survey (BAS) have reported that a piece of ice 1,270 square kilometers and about 150 meters thick has broken off the Brunt Ice Shelf, one of the largest calving events ever recorded.

The piece of ice is about 20 times the size of New York City’s Manhattan Island, or roughly the size of the English county of Bedfordshire, according to a BAS press release. The scientists said they have been watching the glacier slowly crack for the past decade, but they knew something big was about to happen when new chasms started appearing in late 2020, with one advancing as much as 1 kilometer per day. They knew the iceberg had finally snapped off when the chasm very quickly advanced to several hundred meters in width on Thursday.

“This is a dynamic situation. Four years ago we moved Halley Research Station inland to ensure that it would not be carried away when an iceberg eventually formed. That was a wise decision,” BAS director of operations Simon Garrod urged in the release. He said that since it is winter in Antarctica, no one is currently at the research station.

“Our job now is to keep a close eye on the situation and assess any potential impact of the present calving on the remaining ice shelf. We continuously review our contingency plans to ensure the safety of our staff, protect our research station, and maintain the delivery of the science we undertake at Halley,” he said.

The scientists said it’s unclear if the iceberg will run aground nearby, float near the ice shelf, or be whisked away by the currents. Another, even larger iceberg that snapped off the Larsen C Ice Shelf in 2017 threatened to run aground on South Georgia Island late last year; the iceberg was roughly the same size as the island itself.

The Brunt Ice Shelf, which sits on the Weddell Sea, is the most watched ice shelf on Earth, with a network of 16 satellites from the US and European Union monitoring its activity. Since the ice shelf is already floating on the water, the calving event won’t by itself cause any rise in sea level, as the Thwaites “Doomsday” Glacier, on Marie Byrd Land, threatens to do.

Adrian Luckman, a researcher at Swansea University who tracks the ice shelf using satellite data, told the BBC that “Although the breaking off of large parts of Antarctic ice shelves is an entirely normal part of how they work, large calving events such as the one detected at the Brunt Ice Shelf on Friday remain quite rare and exciting.”

“Time will tell whether this calving will trigger more pieces to break off in the coming days and weeks,” he added. Indeed, the graphic shown in the BAS release notes another large chasm forming on the ice shelf.