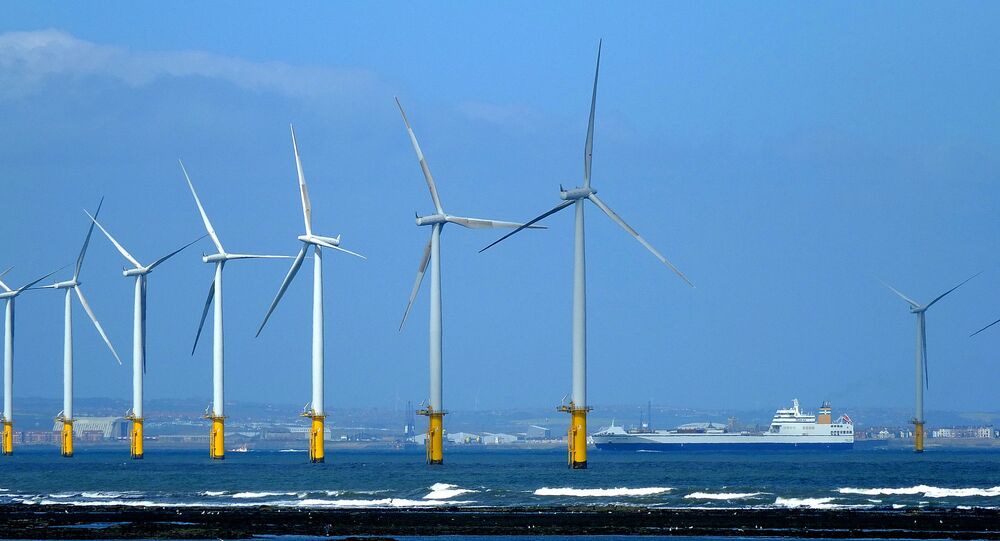 A new report by the International Energy Agency (IEA) highlights the potential for offshore wind power, predicting it could hit $1 trillion of investment by 2040. However, even as the US lurches toward wind power, official opposition from the Trump administration, which has made saving fossil fuels a centerpiece of energy policy, persists.

A report billed as “the most comprehensive global study on the subject to date” was published Friday by the IEA, highlighting the incredible gains and even greater potential for offshore wind power generation, such as floating turbine foundations.

“Offshore wind currently provides just 0.3% of global power generation, but its potential is vast,” said IEA Executive Director Fatih Birol. “More and more of that potential is coming within reach, but much work remains to be done by governments and industry for it to become a mainstay of clean energy transitions.”

The report predicts that China will have the world’s largest offshore wind fleet by 2025, passing the United Kingdom. By 2040, power generation there could rise from the present 4 gigawatts to a towering 110 gigawatts, but the report notes that “policies designed to meet global sustainable energy goals could push that even higher, to above 170 gigawatts.”

The European Union, which presently leads offshore wind production by generating 20 gigawatts per year, is expected to reach 130 gigawatts by 2040 based on current policies. However, like China, the report says the EU could hit 180 gigawatts if its carbon-neutrality aims are met.

The eastern US coast and Great Lakes together produce 26 gigawatts, according to the American Wind Energy Association (AWEA), an industry trade association, and the US Department of Energy (DOE) projects that by 2050, a stretch along the windiest part of the east coast, from Maryland to Maine, could by itself produce 86 gigawatts. A 2016 report by the DOE identified some 10,800 gigawatts of potential wind generation from all US coastal areas.

Before we get too excited, though, it's worth noting offshore wind is starting from a very low base.

​Earlier this week, floating wind turbines took a huge leap forward when the largest and most powerful turbine yet was moved into position off the coast of Portugal by WindFloat Atlantic, the first of three 8.4-megawatt turbines the firm plans to install.

However, the IEA cautions that it takes correct policy to achieve these ends, noting, “Governments and regulators can clear the path ahead for offshore wind’s development by providing the long-term vision that will encourage industry and investors to undertake the major investments required to develop offshore wind projects and link them to power grids on land. That includes careful market design, ensuring low-cost financing and regulations that recognise that the development of onshore grid infrastructure is essential to the efficient integration of power production from offshore wind.”

The report further notes that offshore wind can especially benefit from expertise in the oil and gas sectors regarding offshore construction and maintenance.

However, the “synergy” sought between these competing sectors is far from likely, especially in the United States, where US President Donald Trump has made saving the coal and petroleum industries from financial destruction a centerpiece of his energy policy since the 2016 election.

Trump has derided wind power with oft-debunked claims that wind turbines cause cancer, that they depreciate the value of property several miles away from them and that the lights staying on is dependent on the capricious blowing of the wind.

"I'm not going to lose that wealth on dreams, on windmills, which, frankly, are not working all that well," Trump said at the G7 summit in France in late August. However, the claim was disproved by his own Energy Department just days earlier in a report that detailed the falling costs and rising popularity of wind power.

The US Department of the Interior withheld funding for the nation’s first large-scale offshore wind farm earlier that month, stalling a $2.8 billion plan to build 84 large turbines off the coast of Martha's Vineyard, Massachusetts. The project has faced opposition from fisheries, but also competing bids from firms like Shell New Energies, a division of the oil giant that’s attempting to penetrate the renewable energies market.

Despite being stonewalled, the Bay State has continued to prepare for its offshore boom, opening the first facility in the country for training offshore wind workers. The new facility is operated out of Bourne, where it’s attached to the Massachusetts Maritime Academy, the Boston Herald reported.

However, the Energy Department is being a bit more cooperative. On Tuesday, the DOE announced the selection of 13 new wind energy projects that would together receive $28 million, with the vast majority going to developing offshore wind technologies.

Trump’s hatred of wind turbines likely derives in part from his pre-presidential business dealings. This past February, a Scottish court found Trump responsible for the court costs of his attempt to force the Scottish government to halt plans to install a wind farm off the coast of Aberdeenshire, where it would be within sight of Trump International Golf Links and ostensibly obstruct the view. The case made it to the UK Supreme Court in December 2015, which ruled against the real estate mogul.

We recently wrote about record-low prices for offshore wind in the UK, which could be cheaper than running *existing* gas plants by 2023https://t.co/f9i0YE5LFX pic.twitter.com/6R0fKJ2LTC

Pricing No Longer 'The Hiccup'

​“Some competitors assumed offshore wind would be too expensive,” Max Cohen, an analyst at IHS Markit, told Scientific American. “It doesn’t seem pricing is the hiccup.” The publication noted in July that deals like that penned by Vineyard Wind with the state of Massachusetts yielded far lower energy prices than observers expected: 8.9 cents per kilowatt-hour, or one-third the price of previous renewables solicitations, according to Commonwealth Magazine.

A spokesperson for Bermuda-based investment bank Lazard said the firm had found last November that "in some parts of the US … it is cheaper to build and operate wind and solar than keep a coal plant running … You have seen coal plants shutting down because of this," Sputnik reported.

“In the past decade, two major areas of technological innovation have been game-changers in the energy system by substantially driving down costs: the shale revolution and the rise of solar PV [photovoltaics],” Birol said in the Friday IEA press release. “And offshore wind has the potential to join their ranks in terms of steep cost reduction.”

Simon Evans, an editor at energy policy and climate change analysis outlet Carbon Brief, wrote in a Friday Twitter thread that “offshore wind'll become more valuable to EU/CN grids than coal or gas” and noted that in the UK, record-low prices for offshore wind could make it “cheaper than running *existing* gas plants by 2023.”

“Basically, whichever way you look at it, offshore wind is becoming *really* competitive + has high ‘system value,’” he said. “Very little not to like.”