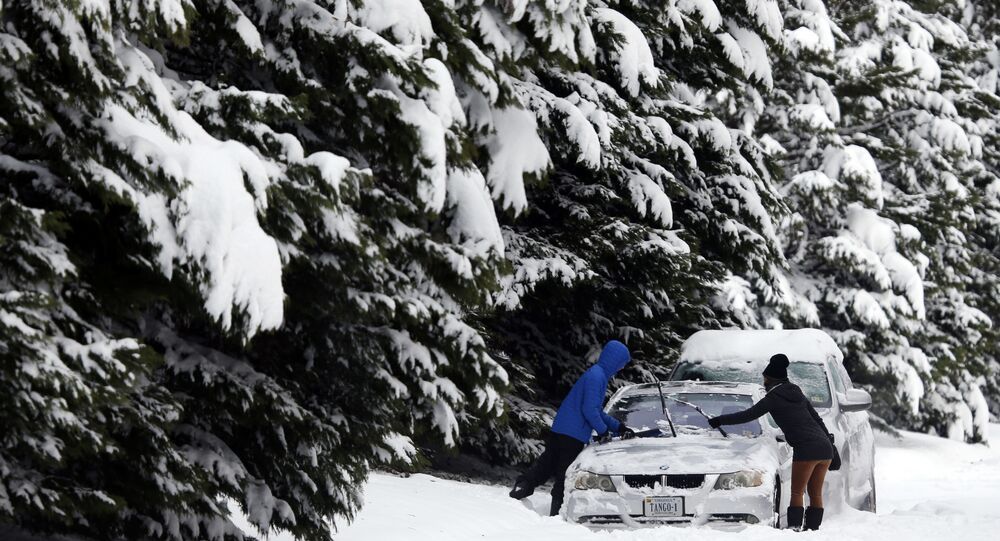 Authorities have warned people in the Southeast US to stay home as Winter Storm Diego continues to dump snow, sleet and freezing rain on North and South Carolina, Tennessee and Virginia, shutting down schools and businesses across the region.

On Friday, North Carolina Governor Roy Cooper declared a state of emergency following a news briefing in which he activated the National Guard. By Monday, the storm had dropped more than 34 inches of snow on Mount Mitchell in northeastern North Carolina.

​"Stay put if you can," Cooper urged Sunday. "Wrap a few presents, decorate the tree, watch some football."

​There have already been at least three storm-related deaths in North Carolina. According to Yadkin County Emergency Services Director Keith Vestal, a truck driver died while shoveling out his truck, which got stuck along Interstate 77 during the storm Sunday. The man experienced chest pains while shoveling and was rushed to a hospital, where he was pronounced dead due to what appears to have been a heart attack.

​A man in Matthews died after a tree fell on his car, and a woman on hospice care in Haywood County passed away in her home after her oxygen supply was cut off due to a power outage, WITN reported Monday.

​"North Carolina has gotten through the worst of the storm, but we need to stay vigilant," Cooper said during a Monday news conference. "Unfortunately, the snow has turned into a nightmare and a tragedy for some, claiming three lives. We mourn them and offer our deepest sympathies to their loved ones."

​Thousands of flights have been canceled or delayed from Texas to the Carolinas over the past few days. On Monday alone, at least 400 flights were canceled to and from Charlotte Douglas International Airport.

"I am declaring a state of emergency to ensure localities and communities have appropriate assistance and to coordinate state response to possible snow and ice accumulations, transportation issues and potential power outages," Northam said, according to weather.com.

Virginia State Police responded to 120 car crashes on Sunday due to the snow, even though police in Prince George County had urged drivers to stay off the road. The snowstorm also caused significant traffic problems for motorists who were stranded for up to 12 hours Sunday on I-81 near Bristol, Virginia.

Richmond and surrounding areas received around nine inches of snow this week, the National Weather Service in Wakefield, Virginia, reported.

​In South Carolina, more than 255,600 customers have lost power, according to reports, while around 20,000 and 30,000 customers in Tennessee and Georgia, respectively, are currently without electricity.

"Ice is becoming a big problem. Please stay off the roads," Greenville County Emergency Management urged Monday, according to reports.

"We have increased our ice (accumulation) forecast quite a bit along the I-85 corridor," the National Weather Service Greenville-Spartanburg office added.

Freezing rain has led to ice on bridges and overpasses near Clarksville, Tennessee, according to weather.com, and 58-year-old William James Taylor was killed Sunday after he was run over by another driver on Interstate 81 near Kingsport, Tennessee, after exiting his own tractor-trailer on the highway.