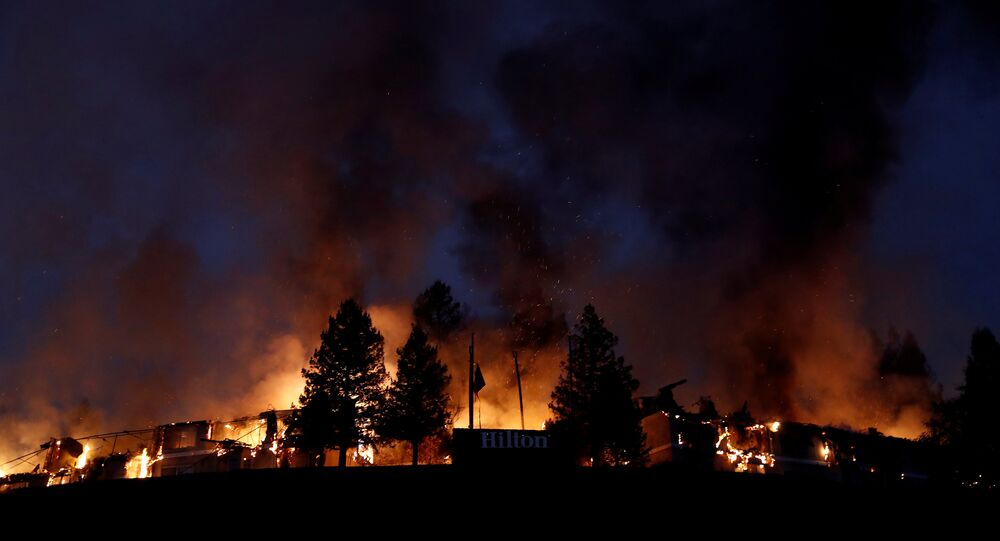 ‘The Fire is Out of Control’: Blazes Fueled by High Winds Sweep Los Angeles

"This fire is very dangerous and spreading rapidly, but we'll continue to attack it with all we've got," Brown said, according to the Los Angeles Times. "It's critical residents stay ready and evacuate immediately if told to do so."

The first fire, named the Thomas Fire, started Monday evening north of Santa Paula, California, growing rapidly overnight and reaching the city of Ventura. So far it has consumed at least 45,000 acres and burned down at least 150 structures, including a 200-unit apartment complex and Vista Del Mar, a psychiatric hospital.

The Ventura County Sheriff's Office first received reports of the fire at 6:24 p.m and by midnight the fire had already engulfed 10,000 acres.

Almost 200,000 people lost power in Ventura County on Tuesday, making it challenging for the 1,100 firefighters to put out the flames.

The second major fire began Tuesday morning in Los Angeles County and quickly enveloped more than 4,000 acres. About 700 firefighters responded to what was labeled the Creek Fire.

According to officials, both fires were fueled by dry conditions and powerful winds.

"It's a very difficult moment, but we will get through this," Los Angeles Mayor Eric Garcetti said on Tuesday, the New York Post reported. "We are a resilient city, we are a strong city, we are a capable city."

Police Sgt. Eric Buschow confirmed there have been no fatalities so far and just one injury.

"[Conditions are] not going to get any better anytime soon, and the fire is out of control," Buschow said.

Garcetti has warned those with asthma or other health conditions to stay indoors as the smoke from the fires has caused poor air quality.

California has suffered through some of its most catastrophic fires ever this year. In October, more than a dozen fires blazed through the northern part of the state, burning thousands of acres along the way. The La Tuna Fire in September also sent massive amounts of smoke into the air above Los Angeles and forced the evacuation of hundreds of homes.