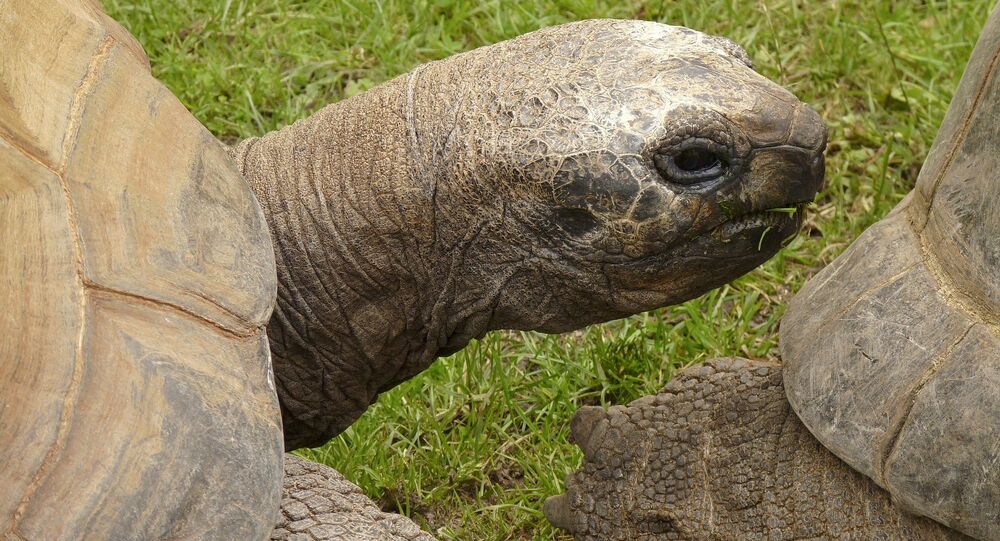 He is probably the oldest living creature in the world and now Jonathan, a giant tortoise, had to face the disappointing truth about the subject of his romantic ambition.

Proving that love can often be a waiting game, 186-year-old Jonathan has spent the past 26 years wooing his female love interest  — only to now discover that Frederica is, in fact, Frederic.

Romance has blossomed between the pair after the French consul gifted what they thought was a female tortoise to the governor of St. Helena, part of the British Overseas Territory, as a mate for the lonely creature.

News of the gender mix-up only emerged after Frederica was taken to a vet on the remote volcanic outpost in the South Atlantic Ocean — famous as the place of Napoleon Bonaparte's exile and death — to have repairs to her shell.

On closer examination, however, they discovered also that she was, in fact, a male — although it has done little to alter their relationship as they remain creatures of habit when it comes to sleeping and eating.

Ironically, the discovery comes at a time as the subject of same-sex marriage causes division on the island that lies 1,200 miles off the coast of southern Africa.

A bill was introduced in 2016 to allow same-sex marriage before being withdrawn after sparking much controversy among some members of the 4,255 population.

Since then, however, the legislative council has been canvassing opinion as to whether the bill should be returned ahead of a court case that seeks to challenge the current law of not allowing it as being discriminatory.

Same sex marriage has been legal on two of the three main islands, Ascension and Tristan da Cunha since 2017 — however, not on St. Helena, where the outcome of a Supreme Court case may be required.

© Photo : Youtube/SAMS St Helena
Awkward Airport Sees First Flight Since Construction...a Year Ago
The case comes after a St. Helenian made an application to the registrar on the island to get married to his same-sex partner in 2016.

Being under UK law, the registrar referred it to the court in 2017, where the Chief Justice revealed he was aware of strong held views on St Helena and the considerable importance being placed on the issue.

The Chief Justice decided each party should be given the chance to be represented by counsel through legal aid funding and provided to the court. He allowed the Equality & Human Rights Commission to be a party.

These legal arguments had to be submitted by July before a court date could be determined.

Regardless, however, Jonathan is blind to it all, mainly because his eyes are dimmed by cataracts and his sense of smell is gone. It remains every governor's nightmare that he might die on their watch, having already long outlived the average giant tortoise life span of 150 years.

Yet he remains a major tourist attraction on the isle which has only recently witnessed its first scheduled flight to land at St. Helena's new airport, built at a cost of £285 million (US$385 million) to the British taxpayer.