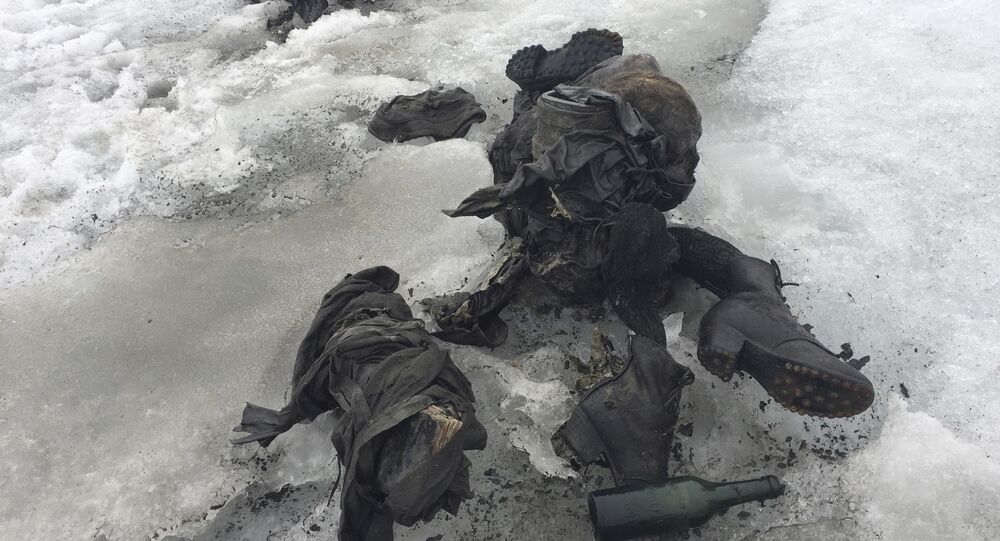 As global warming due to human-induced climate change melts glaciers at increasing rates, Swiss police are warning that many more bodies similar to those found recently will be uncovered by retreating ice.

The frozen mummified bodies of a mountaineer couple who vanished some 75 years ago while hiking in the Swiss Alps are only the harbinger of an expected grisly harvest, as melting ice throughout the legendary mountain chain reveals more and more human remains, according to local law enforcement in the alpine country.

Swiss police are now warning that hundreds of corpses of those who have gone missing in the mountains will be revealed as the ice retreats, particularly on sunny southern-facing slopes.

Authorities in the fabled Swiss Alps have noted a significant uptick in human bodies discovered over the past several months alone.

The body of a man who had been reported missing some 30 years ago is the most recent discovery, as rescue teams last Tuesday freed his remains after climbers spotted a hand and two shoes sticking out of the snow on Switzerland's Hohlaub glacier, according to a report from the Guardian.

Forensics experts in Bern matched DNA from the corpse to a 43-year-old German citizen who disappeared August 11, 1987.

That discovery occurred less than a week after the bodies of a Swiss couple were found in another nearby glacier, missing for 75 years.

On Thursday, the body of a passenger involved in an Air India crash over 50 years ago was discovered on Mount Blanc in the French Alps, a region suffering from the same warming effects that are causing the Swiss glaciers to rapidly disappear.

Melting at an increasing rate, glaciers in the mid-European Alps in 1850 covered some 670 square miles in Switzerland alone. That area has shrunk by at least half since that time, according to the Guardian.

Swiss police expect that many more bodies will be found.

Is There a Link Between Nationalism and Climate Change Denial?

"The glaciers are retreating, so it's logical that we're finding more and more bodies and body parts, said a local police spokesperson.

"In the coming years we expect that many more cases of missing persons will be resolved," the spokesperson added.

Hundreds of people are recorded as having disappeared at one time or another over the last two hundred years, most trapped in ice, streams or crevices following an accident or suicide, although a few cases are thought to be the result of criminal activity, according to Swiss authorities.

In 2000, Swiss officials began taking DNA samples from the family members of those missing in the mountains, following their disappearance.