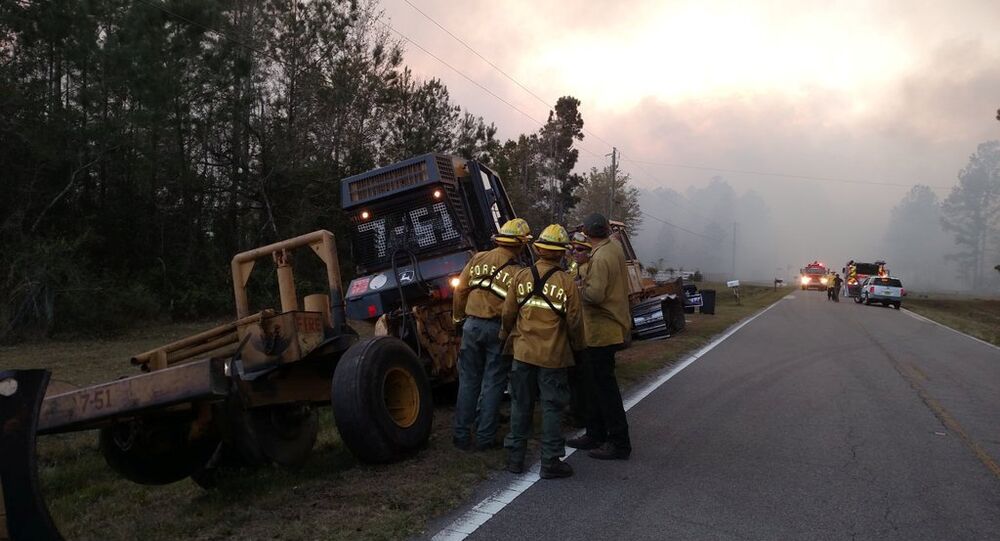 Wrath of the Sun: Florida Under Siege by 100 Wildfires (PHOTOS)

More than 100 wildfires are raging throughout Florida as a result of drought and dry conditions throughout the Sunshine State.

​Florida Governor Rick Scott has declared a state of emergency until the blazes can be brought to heel.

"I';ve continued to be in contact with [Agriculture] Commissioner [Adam] Putnam and local officials about the wildfires across the state and today I am declaring a state of emergency in Florida to ensure we are ready to respond to and prepare for these fires," said Scott in a statement on Tuesday.

Florida Governor Rick Scott declared a state of emergency in response to the 107 wildfires currently burning across the state pic.twitter.com/0EQXv3flzV

​The Florida National Guard has been deployed to fight the worst of the fires and the Division of Emergency Management has been tasked with activating a plan to manage the wildfires. Scott has also called for federal assistance.

"Much of Central and South Florida are approaching drought-like conditions and the chances for wildfires are continuing to increase with hotter temperatures and low rainfall," continued Scott. "This may only get worse as we enter the hotter summer months and it is crucial that we take every action right now to be prepared."

​Dry, breezy conditions in South Florida have contributed to the spread of the flames, as even tiny fires from cigarette butts or similar can grow into ruinous wildfires.

"From St. George Island in the Panhandle to a wildfire just north of one of the world's most famous tourist attractions in Orlando, we're seeing that every area of our state is susceptible to wildfire," added Putnam, who called this the worst wildfire season since 2011. "May God bless our brave firefighters who are working tirelessly to protect us."

​The 2011 Prairie Fire destroyed about 68,000 acres of brush in Florida before it could be extinguished. This April also marks the tenth anniversary of the Bugaboo Scrub Fire, the largest wildfire in Floridian history. That fire burned over 500,000 acres to cinders in Florida and neighboring Georgia.