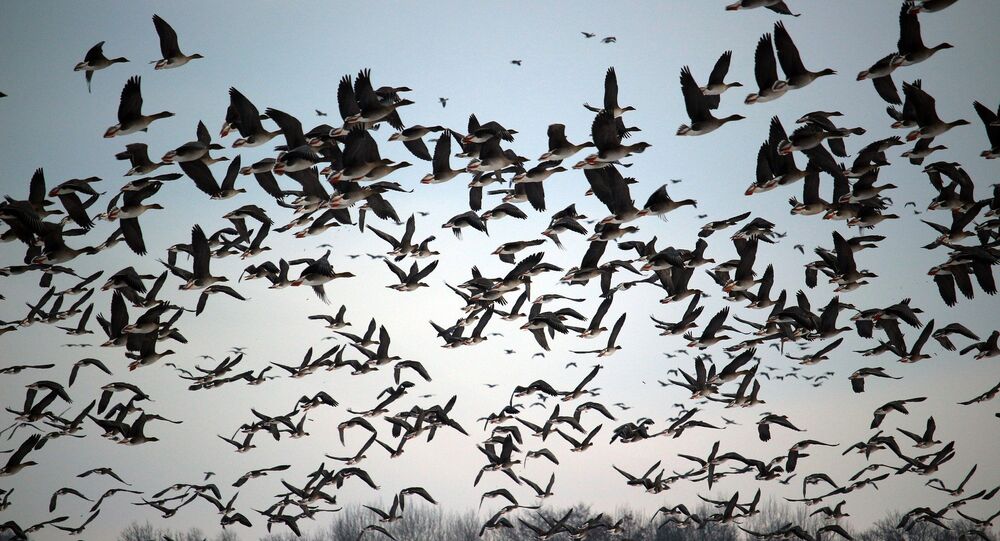 These days, it's wise to observe airport security measures. Copenhagen Airport seems to stand out from its peers in that the main security threat is not terrorists but feathered trespassers.

© AFP 2020 / VALERY HACHE
Flocks of Fowls Become a Major Hazard to Flight Safety Over Finnish City
A growing number of migrating barnacle geese have become a problem for Copenhagen Airport, which is Scandinavia's largest. The huge flocks pose a ballooning problem for airport security, as they are large enough to down a jet if one collides with a motor.

Over the last 40 years, the numbers have gone up from around 200,000 to about half a million, and the growth trend seems to be picking up, Professor Jesper Madsen, the head of the Institute for Bioscience at Aarhus University, told Danish Radio.

"We expect the numbers of barnacle geese to increase from 500,000 to 3 million over the next 10 years. Obviously, this will cause more problems for air traffic," Jesper Madsen said, citing the availability of food both in Denmark, further south and in nature reserves in northern Russia, where the geese spend the summer.

​Unsurprisingly, the number of birds which collide is high. Between 1997 and 2006, only three collisions between geese and aircraft happened around Copenhagen Airport. In the ensuing decade, the number rose to 16.

© Flickr / Blondinrikard Fröberg
Oh, S*it! Swedish City Pestered by Hordes of Jackdaws
The acuteness of the goose problem spurred the airport authorities to summon an international meeting featuring representatives from 22 countries to discuss the problem. So far, Copenhagen Airport has already taken steps to keep the geese away, with hunters armed with fireworks, shotguns and sirens patrolling the area around the clock. On top of that, a special type of grass was sown in the vicinity of the airport that is known for giving geese stomachaches, encouraging them to seek other pastures.

Jesper Madsen also suggested that the growing geese populations also posed a problem for agriculture, having withdrawn from their Arctic breeding grounds and learned to exploit their conservation status across Europe.

"At the same time, many countries have protected the wild geese for decades, and so modern agriculture has become an open pantry for geese, and they also have learned to use it," Jesper Madsen said, as quoted by the Danish magazine Ingeniøren.

© Flickr / NOAA Photo Library
Eat This, Global Warming! Bird Poo to Repel Arctic Climate Change
To address the problem, Danish researchers advocated creating a pan-European umbrella organization for reaching an acceptable goose population level that does not endanger air traffic and is no nuisance to agriculture.

In an unrelated study, Danish researchers Anders Pape Møller and Johannes Erritzøe related the brain size in birds to the frequency of road accidents. Birds with larger brains were found more likely to cope with the traffic, while crows were reported to do particularly well and possessed the ability to adapt and "learn" the traffic rules. Each year, about 250 million birds die in road accidents across the world.

Copenhagen Airport Kastrup is the main international airport serving the Danish capital Copenhagen, the entire province of Zealand, the Øresund Region, and a large part of southern Sweden. It is the largest Nordic airport with 29 million passengers in 2016, and one of the oldest international airports in Europe.

We can’t get enough of that #IronGiant in our beautiful airport. Post your own shots of the #A380 with #CPHA380, and you could win a VIP-tour of CPH and the A380. #cphairport #cphtravel #copenhagenairport #denmark #airport #aircraft #aviation #potd #scandinavian #wanderlust #traveler #fly #travel #air #plane #holiday #explore #vacation #cph

The barnacle goose is a medium-sized goose, reaching 70 centimeters in length, which has a body mass of 2.5 kilograms and a wingspan of 150 centimeters. It has a black upper breast, neck and head, with a white face and belly.

134th for the yearlist. Barnacle Geese at Flint Marsh looking over to Parkgate. pic.twitter.com/SZMqcw8qBK

Bottoms Up! Danes Convert Scotch Into Energy in Lucrative Scheme