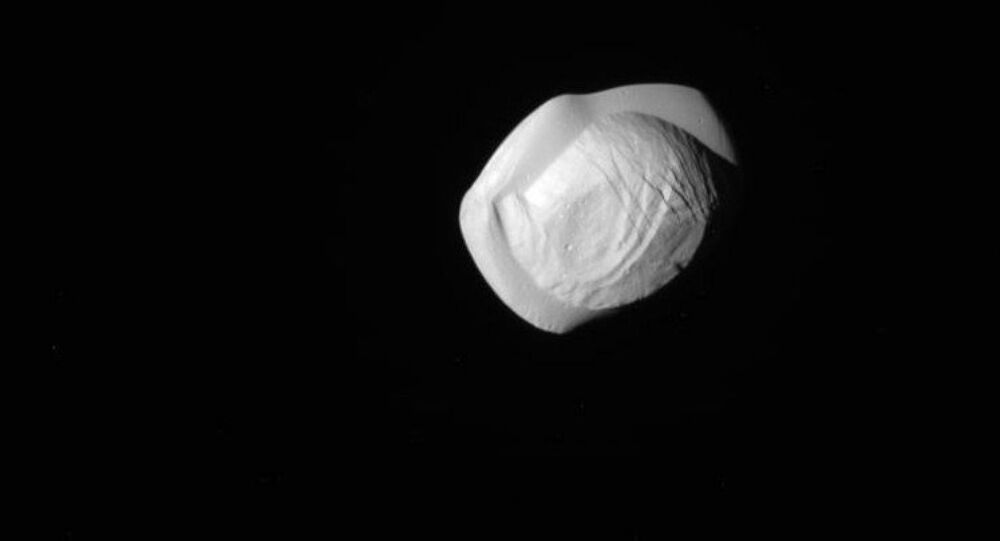 NASA's Cassini spacecraft has photographed Saturn's moon Pan in amazing detail, which reveals the satellite has an unusual shape reminiscent of a dumpling.

NASA's Cassini spacecraft has taken the clearest shots yet of Pan, a small inner moon of Saturn which measures just 35 km across.

Like two of its sister moons Atlas and Iapetus, Pan has an equatorial ridge made from of stray particles from Saturn's rings.

The exciting discovery has left observers searching for ways to describe the moon's appearance, offering suggestions like "space ravioli," "grenade" and "walnut." One of the nearest approximations appears to be pelmeni, a kind of Russian dumpling.

Space ravioli? No, it's Saturn's moon Pan. @CassiniSaturn images are closest ever taken of this odd shaped moon: https://t.co/iXw8VX0682 pic.twitter.com/9B15ZSdyZD

#Pan in the news today, after the awesome #Cassini closeups. For comparison, check out the 1990 discovery image, and its young discoverer. pic.twitter.com/T1hsVMMmXB

​​A joint mission between NASA, the European Space Agency and the Italian space agency, Agenzia Spaziale Italiana, the Cassini mission will end in September 2017 after 13 years in orbit around Saturn.

© Sputnik / Michael Klimentyev
'A Symbol How to Serve Nation': Putin Congratulates First Woman in Space Tereshkova on 80th Birthday
On April 22 it begins the final stage of its mission, a set of several plunges between the planet and the inner edge of its rings in order to send scientists information about Saturn's gravitational and magnetic fields and the composition of its rings and clouds.

After it has completed the mission, Cassini will maneuver into the upper atmosphere of the gas giant planet and burn up like a meteor.

Scientists think that two of Saturn's moons, the icy Enceladus and methane-rich Titan, might be able to host some form of life. Cassini's fiery end eliminates any chance of the probe someday colliding with a moon and contaminating it with microbes from Earth that managed to survive the trip across the solar system.