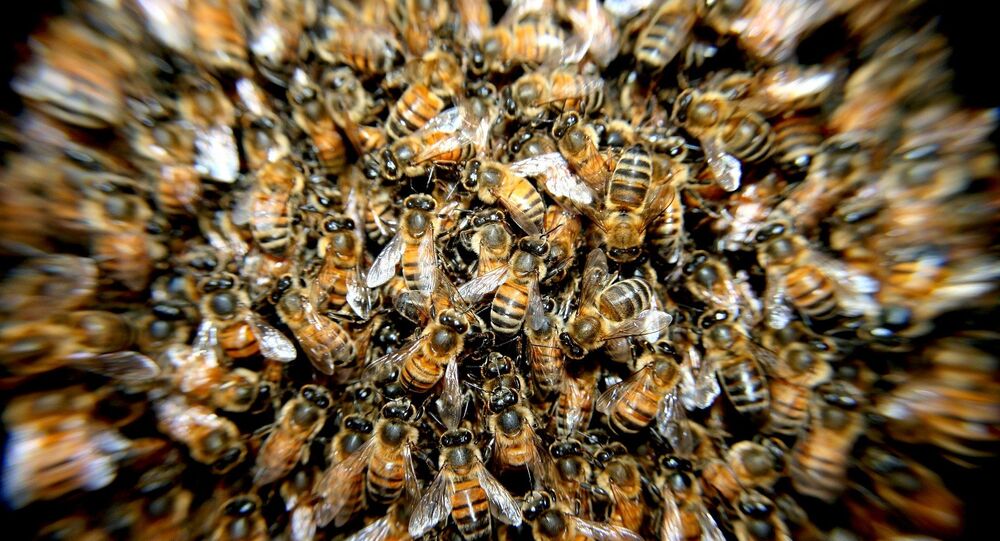 Neonicotinoid pesticides are a serious threat to honeybees and many other insect species, according to a Greenpeace scientific review - but an environmental campaign group has told Sputnik that lobbying from farming and pesticide interest groups could mean reform is difficult to achieve.

Following a risk assessment by the European Food Safety Authority (EFSA) that determined the neonicotinoids clothianidin, imidacloprid, and thiamethoxam caused the long-term population decline of honeybees, the European Commission introduced a partial ban on the use of these pesticides in May 2013. The Commission stopped short of a full prohibition on the basis there was "insufficient" scientific data to conclude the elements could impact insects other than honeybees.

In response, Greenpeace commissioned the University of Sussex to conduct a major review of all scientific studies published since 2013, investigating the impacts of neonicotinoid insecticides on pollinators and the wider environment.

The findings of the report make clear neonicotinoids not only pose risks to honeybees but have wider environmental implications and threaten other species, such as bumblebees, butterflies and water insects. As a result, Greenpeace is urging the EU to fully ban neonicotinoids.

Neonicotinoid pesticides pose a serious risk not just to bees, but to many other species as well https://t.co/GMzCFFUZwv #SaveTheBees pic.twitter.com/psS7JIzLGz

However, Nick Mole of Pesticide Action Network UK isn't convinced a full ban will come to pass. He says pesticide producers has successfully pressured lawmakers the world over to keep their products on the market via expensive lobbying efforts for years, despite the risks and inefficacies of chemical pesticides being well known.

"The pesticide industry knows its own products are useless at dealing with insects and weeds that genuinely do blight agricultural production, and provide no yield benefit — but markets remain flooded with them, because they generate vast profits for the firms involved.

Good news for #bees: This landmark court ruling will force chemical companies to be more transparent about the safety of their pesticides pic.twitter.com/pVu4ME1SFZ

"These companies don't care about the environmental or health impacts pesticides can have, despite expensive PR campaigns to suggest otherwise. If they genuinely did, they'd invest in non-chemical weed control remedies, but that might cost them too much and gain them too little.

Mole's allegations are supported by a 2016 report issued by Friends of the Earth, titled Buzz Kill. The report demonstrated that the pesticide industry had "weakened and delayed" pesticide reforms, and had helped shape environmental protection plans that did little to protect wildlife and the environment, but much to protect industry profits.

Moreover, it noted noted that despite the partial ban on neonicotinoid pesticides in 2013, farmers' yields have remained stable in all affected industry sectors. It concluded that neonicotinoids were a needless, excessive cost for farmers,  which only served to destroy the very pollinators agriculture relies upon.

Mole says that UK secession from the EU could also set back the UK's environmental protection regime in respect of pesticides significantly.

"Withdrawing from the EU will likely mean the scrapping of what EU directives and policies on pesticides there are. The National Farmers Union is a virtual puppet of the pesticide industry, and you'd have to go back to Michael Meacher, who left office in 2003, to find a UK Environment Minister who was remotely concerned about pesticides," Mole concluded.

The full extent of corporate influence in the EU was revealed in January, in a Public Affairs Council study that found Brussels had become the lobbying world capital.