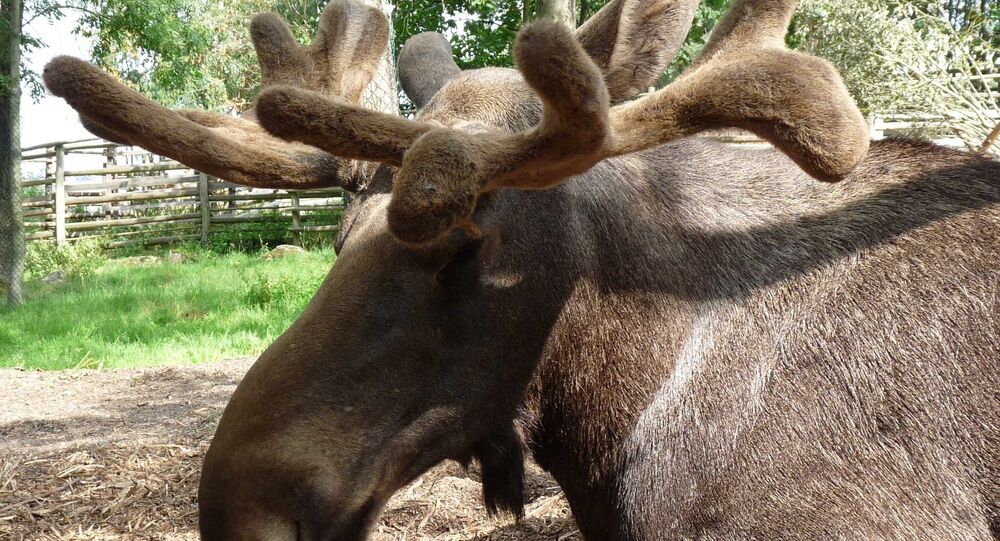 Stately and elegant, elk are a universally recognized symbol of the Nordic countries, perpetually found on souvenirs and trademark traffic signs. Recently, however, the Scandinavian population of elk has come under mortal threat, as a dangerous disease that only hits members of the deer family has begun to spread.

© Flickr / Stian Olsen
Lucky Shot: Norwegian Lottery Machine to Choose This Year's Elk Hunters
Earlier this summer, the first cases of chronic wasting disease (CWD), a deadly deer sickness, were registered in Europe. The sickness was first occurred in two elk in Norway, near the Swedish border. Today, major Swedish authorities and competent bodies launch a campaign to investigate whether the disease already spread itself further to affect deer animals in Sweden. According to scientists, the creatures move freely across the border to Sweden, further raising the risk of infecting their Swedish cousins.

The notorious infection emaciates and disorients the animals. The disease-ridden deer, exposing tell-tale symptoms, usually die within a few months. The infection has been found in North America since the 1960s, and it remains uncertain how it reached Norway in the first place. According to Swedish game pathologist Erik Ågren, it could be a case of spontaneous mutation, but the spread with imported animal products is more likely. If the disease is found in Sweden during monitoring, a ban on selling wild game may be imposed.

Cow and calf out together for lunch on a beautiful afternoon #Moose pic.twitter.com/4jpRYsnHA4

​The autopsy room at the National Veterinary Institute in Uppsala is already in combat readiness mode to investigate the spread of the disease. According to Erik Ågren, the disease may be recognized through the dissection of the brain and the lymph nodes.

"First of all, as many samples as possible must be scrutinized to determine whether the infection already is manifest in Sweden," Ågren told Swedish national broadcaster SVT.

YouTube/Jonna Jinton
Ancient Swedish Herding Call 'Kulning' in Action
Sweden's Board of Agriculture is the one responsible for the mission in cooperation with the Food Agency, the Public Health Agency, as well as hunters and deer owners. According to Katharina Gielen, the deputy head of the department of animal health and the Board of Agriculture, it is still unclear how much the operation will cost as the monitoring plan is not completely finished. So far, the public has been urged to report sick or dead animals.

Although preparations are in full swing, specialists such as game warden Michael Johansson remain calm.

"So far, there have only been a few isolated cases. Earlier we had this bird flu. Some ten years ago, it was the talk of the town, but no mass deaths ensued. So far, we take it easy, but keeping an eye on the development," Michael Johansson said.

Chronic wasting disease (CWD) is a transmissible spongiform encephalopathy (TSE), only found in members of the deer family, such as mule deer, white-tailed deer, elk or moose. Remarkably, this disease is closely related to mad cow disease and only affects adult animals. As of today, there is no evidence of the transmission of the disease to humans.

What a Dump! Sweden's West Coast Littered With Foreign Garbage