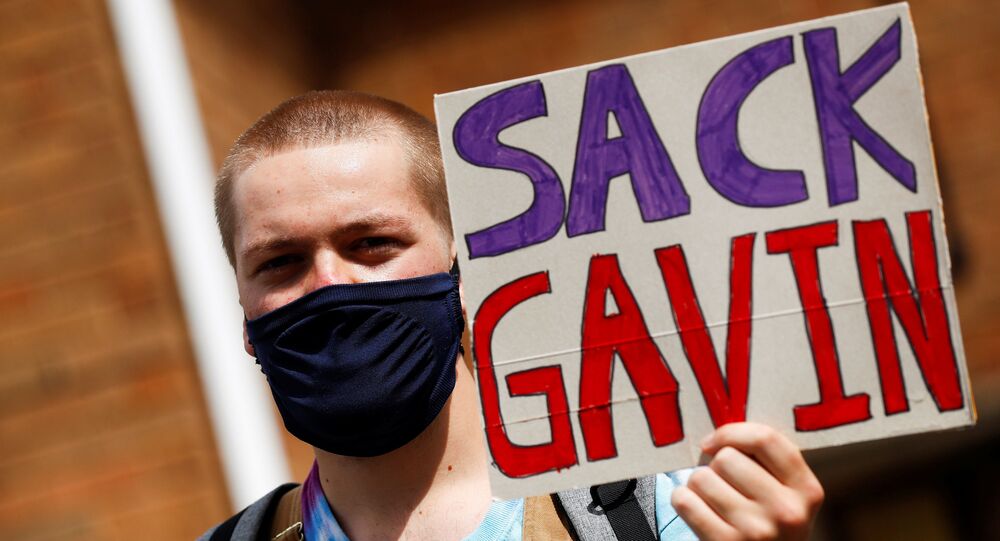 In my column, last Friday, I predicted that “Mark my words the Government will be forced into another embarrassing U-turn on this fiasco as the pressure builds on them this weekend.”

I was bang on the money and the smell of burning rubber and screech of tyres in Westminster as the government performed another embarrassing U-turn was stomach-churning and a national disgrace.

If you want the lottery numbers for Wednesday to give me a shout!

But, seriously it was hardly a difficult prediction, was it? Anyone with only one CSE could see that the Government would have ‘to be for turning’.

The only person who couldn’t see it was the Frank Spencer of politics, Gavin Williamson.

While he dithered and delayed, kids across the UK were having their dreams and futures dashed.

Now he decides to do what I told him to do three days ago but what he really should have done back on July 12 when he was warned that the exam iceberg was approaching.

Today on the news channels he suggested that he only knew the scale of the algorithm problem this weekend! What's that smell?!

Regardless of the truth of his statement, the real truth is, that if he didn’t know, then the question has to be why didn’t he know?

I nicknamed him Frank Spencer but when he was at the defence department top officers referred to him as Pike out of Dad’s army.

However, to be frank, Captain Mainwaring and his bunch of comic old boys were better prepared and equipped, with their broom handles for rifles, to deal with the impending Nazi invasion than Boris has been for the COVID threat.

They had a strategy but it has become apparent throughout the COVID pandemic that Boris has been making it up as he goes along. Corporal Jones use to shout ‘Don’t panic’ which is advice Boris should heed.

However, as this educational debacle continues Boris is now missing in action. If you believe Dominic Cummings, he has gone camping in Scotland! ‘Ooh, he is just like us and we are all in this together!’

Look, I know he’s been ill, just had a baby, and has been under immense pressure but he dreamt of being PM since he was at Eton so I am afraid it goes with the job and therefore he should get his backside back to Westminster and sack Pike/Frank/Gavin immediately.

Especially after Williamson’s bumbling routine this morning on all of the MSM news channels.

He still doesn’t seem to get it, does he?

Is Anyone in Control?

He has ruined thousands of kids’ lives and also added to the narrative that this Tory government doesn’t care about working-class kids and their futures.

The so-called ‘red wall’ that Boris captured in the last election is falling quicker than the walls of Jericho so if Williamson won’t resign, as he stated this morning, then Boris must sack him today.

Here is my prediction, let’s see if I can get it right again? I believe that will be gone before the week is out.

Boris has to cane Williamson but he also has to get a grip himself.

Boris has staked his reputation on the pledge that he will get all kids back in the classroom by September, just four weeks away.

Let me tell you Boris, you have no hope of achieving that as a growing number of parents just don’t believe that their kids will be safe in the classroom.

Your continued attacks, aided and abetted by your mates in the MSM, on teachers and the describing of their unions as lefty activists are not helping your cause or our children.

You need to work with the teachers, not against them.

You’ve got the same problem with regards to masks and further lockdowns because of the Cummings’ ‘Operation Fear’ tactics and his disgraceful hypocritical visit to Durham.

People are now believing that we are NOT all in this together and that there is one rule for us and another for you lot, the establishment elite.

News this morning that Marks and Sparks are getting rid of 7 thousand jobs, following swiftly on from the impending collapse of Debenhams, are all fuelling an atmosphere of the government and the country spiralling out of control.

Rishi Sunak can give away all the tenners in the world subsidising junk food but it will not divert our attention away from the fact that Boris and his government are not in control of our destiny.

Matt Hancock can try and divert attention by scrapping Public Health England today for their handling of the COVID pandemic in the early days but the uncomfortable truth for Hancock and Johnson is that the buck stops with the politicians i.e. Boris and Matt.

They were the ones telling us that they were ‘following the science’.

It was Boris was who was shaking hands with all and sundry, dismissing the use of masks and allowing major events to continue.

And of course, the fact the Hancock and Johnson went down with the virus didn’t really inspire confidence, did it?

This whole pandemic will be largely remembered for the lack of clarity from Johnson’s government which has clearly added to more deaths from Covid-19.

© AFP 2020 / LEON NEAL
UK Health Minister Announces New Organisation for Public Health as PHE is Being Axed
Their continual U-turns are directly responsible for the rising tide of cynicism from many sections of the public and is only fuelling the conspiracy theories over vaccinations and masks.

Don’t waste your time and energy furiously typing me e-mails saying that Labour wouldn’t have done any better because you know that I agree. But that’s not the point, is it?

As it is Boris and the Tories who are meant to be in charge of this ship as it heads towards the educational, economic and pandemic iceberg that threatens to sink the UK.