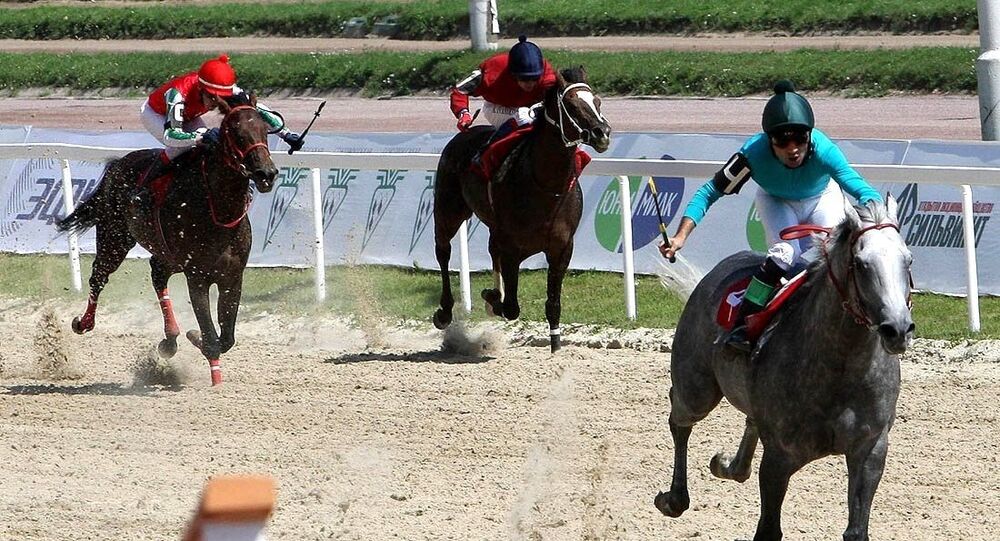 The 2019 Cheltenham National Hunt Festival, which begins on Tuesday at 1.30pm, is quite rightly regarded as the Olympics of jump racing. There are 28 races over the four days, worth more than £4.5m in prize money.

The best horses will be in action and great excitement is guaranteed. But how do we find the winners? While the competitive nature of the races makes it a potential minefield for punters, we can tilt the percentages in our favour if we keep certain key factors in mind.

Firstly- and this really can't be repeated enough- there's nothing like previous Festival form.

© AP Photo / Michael Probst
No Horsing Around: White Mare Wanders Frankfurt's Fechenheim District Every Day (PHOTOS)
Secondly, the large stables and a few powerful owners tend to dominate. 15 of the 28 races last year were trained by just two men: Gordon Elliott (eight winners) and Willie Mullins (seven). Elliott has now trained 22 winners at the Festival since 2011.  Last year seven winners were owned by Michael O'Leary's Gigginstown House Stud. Smaller trainers and owners can still win but it doesn't happen as often as in the past.

The third factor is the age of the horse. In my Sputnik Guide last year I wrote "The Festival usually isn't a happy hunting ground for horses aged 10 and above in Grade One races. That doesn't augur well for the chances of the popular 12-year-old Cue Card in the Ryanair Chase".

Cue Card was pulled up and subsequently retired.

The fourth factor is the ground. This year, it's likely to be on the testing side, especially as heavy rain is forecast for Tuesday morning. There's light rain forecast for Thursday too, but the forecast for Wednesday and Friday, Gold Cup day, is dry. All things considered, the Gold Cup will probably go off on the the ground that is good-to-soft, soft in places. That is likely to suit horses that are proven stayers beyond the trip.

Now let's take a closer day-by-day guide to the action:

The race of the day is the Champion Hurdle (3.30) in which Buveur D‘Air, the winner for the past two years, faces a strong challenge from the Irish-trained mares Apple's Jade and Laurina, both of whom he has to concede 7lbs to. It's a tough one to call as the three have never raced against each other, but marginal preference at the prices is for the third-favourite Laurina, who did win by 18l on testing ground at the Festival last year.

© AP Photo / Richard Sellers
Race for £1Mln Bonus Begins at Haydock - Plus Premiership and SPL Preview
Bearing in mind the good record of horses previously placed in the race,  an each-way interest on last year's runner-up Melon (12-1), who was second in the 2017 Supreme Novices too, could also bear fruit. Elsewhere on the card,  Kalashnikov might have enough ammunition to get a place in the Arkle (2.10), Benie Des Dieux can land the Mares Hurdle (4.10) for the second year running with Lady Buttons of each-way interest (if lining up here instead of the Champion Chase), and Tower Bridge is quietly fancied in the 4.50.

On the form book it's hard to oppose Altior (3.30) and Tiger Roll (4.05) as they bid to register back-to-back wins in the Champion Chase and the Cross Country. In the RSA (2.10) last year's Pertemps winner Delta Work looks solid, with Drovers Lane, whose trainer Rebecca Curtis won this in 2014, the each-way shout at 14-1.

The Coral Cup (2.50) is very tricky but the Willie Mullins' pair Whisky Sour (10-1) and Mr Adjudicator (16-1), who were both staying on to be placed at last year's Festival in races over shorter trips, look interesting.

© Sputnik / Алексей Никольский
WATCH Putin Saddle Horse, Wish Russian Women Cops Luck Finding Suitors
Paisley Park has been a revelation this season and having won well at the track on his last outing, he deserves his place at the head of the market in the Stayers Hurdle (3.30) Last year's second, Supasundae, rates a big danger while Bapaume, whose trainer (Mullins) has won this the last two years, with horses priced 12-1 and 10-1, looks overpriced at 20-1.

Monalee, a good second at the last two Festivals and who represents last year's winning trainer Henry De Bromhead, is a solid each-way bet in the Ryanair (2.50). The Gordon Elliott-trained Measureofmydreams, third in the NH Chase in 2016, has been backed from 40-1 to 11-2 for the Kim Muir (5.30).

The Gold Cup (3.30) usually goes to a horse in single-figure odds and out of those, last year's winner Native River, who has a great Festival record, and last year's RSA winner Presenting Percy, currently the 7-2 favourite, have the most solid credentials.

Of the two marginal preference is for the latter as there's still a nagging doubt that Native River's epic duel with Might Bite twelve months ago has left a mark on both horses- and stats-wise, you do have to go back fifteen years to find the last horse (Best Mate) to successfully defend his crown.

Regarding each-way options, both Definitly Red and Elegant Escape need a career best to win, but with conditions likely to suit they could outperform their long odds. In the other races, Cousin Pete, who was staying on when dead-heating for third at odds of 66-1 last year, can go well again at a juicy price in the Foxhunters (4.10)  while the Gordon Elliott-trained Cartwright could be the right one to back in the 4.50.