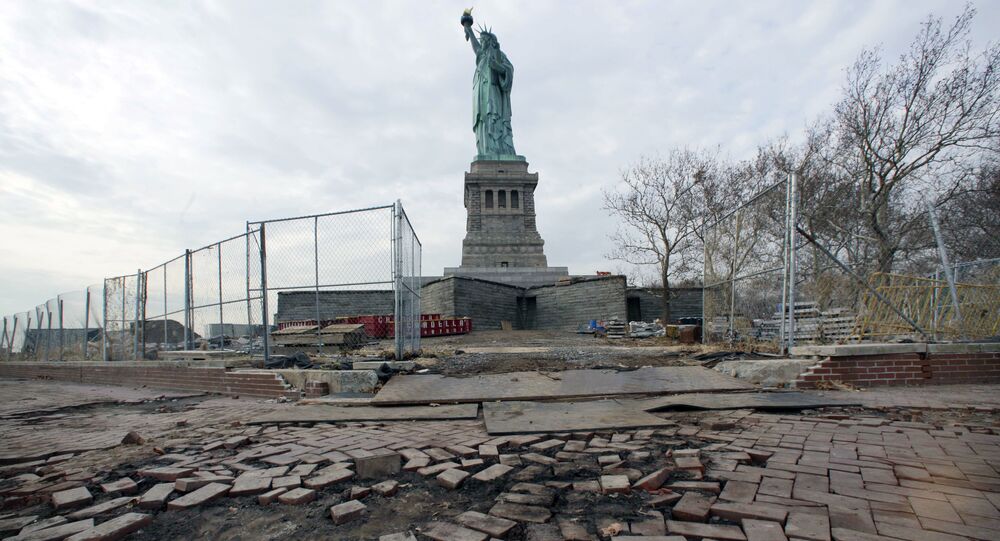 America… Its Own Worst Enemy

It is an epic paradox that President Donald Trump, like previous US presidents, boasts of America’s military supremacy and its vital role as defender of the nation.

The Trump administration in its first year in office boosted the annual military budget to $700 billion, up from an already gargantuan average figure of some $600 billion a year. Trump said the colossal military spend was a vital necessity to maintain America's national security and global leadership.

The paradox is that this monstrous misallocation of economic resources on an institution supposedly keeping the nation safe from foreign threats is actually posing the biggest national security threat to America.

Forget purported foreign enemies, such as Russia and China, Iran or North Korea. It is the American defense industry and its grotesque warping of national priorities which are undermining US society and its global power.

These issues of alleged national security pale into insignificance when compared with the disastrous impact of America's militarized economy on US society.

American Professor of Politics Colin Cavell says the cumulative extravagance of the US military decade after decade is a major factor in why the country's total debt has now exceeded $20 trillion. The bitter irony is that the indebted nation — by far the world's biggest debtor — is then a cause for fiscal hawks in Trump's Republican party to demand brutal cuts to public spending and investment.

In an interview for this column, Cavell commented: "This military debt is crushing the American worker, as it provides fodder for Republican lawmakers to cut back on healthcare, housing, education, roads, bridges, and other infrastructural projects, thus undermining job creation, reducing wages, and increasing taxes to pay off the debt."

Official figures show that social inequality and poverty in the US has hit record levels, with some 40 million households, or nearly half the entire population, now rated as poor.

America's pandemic poverty is integral with the retrenchment in federal public spending and social investment. That in turn is correlated with the titanic allocation of economic resources to the defense industry. Ultimately, ordinary Americans are paying for their own immiseration by bearing in countless indirect ways the onerous costs of military largesse.

How is such a self-defeating policy possible? As Professor Cavell notes, there is a vicious cycle at work. That cycle can only be broken by a thorough democratization of the economy and by American citizens waking up from propaganda myths about the supposed virtues of US militarism and the supposed evil of foreign enemies.

He says there is a very powerful cabal of vested interests benefiting from what he calls a "military racket", echoing the classic anti-war book by American Major General Smedley Butler published in the 1930s, decrying "War is a Racket".

© AP Photo / Jacquelyn Martin
Clock's Ticking: Congressman Warns About ‘Debt Bomb’ Threat to the US
Cavell remarked: "The military spending bodes well for American capitalists, especially those who supply arms, weaponry, uniforms, guns, planes, drones, rations, mercenaries, logistics, and so on, as well as those who loan money to the US government and receive usurious interest payments on the $20 trillion national debt."

This military-industrial-financial complex is well-serviced by countless think-tanks, media pundits, lobbyists and members of Congress who are on the payroll, or euphemistically "political donations", from giant Pentagon weapons firms, like Lockheed Martin, Boeing and Raytheon.

The media environment is then disproportionately biased towards the interests of the Pentagon industry. Those interests invariably seek militarism and conflict rather than diplomacy when it comes to foreign relations because lucrative profits and dividends on Wall Street incentivize their self-interested bias.

Cavell points out that the vicious cycle also operates in other ways too. A vastly outsized military with seven overseas naval fleets and 800 bases around the globe requires a form of justification for its existence. That inevitably means American military planners and think-tanks searching for enemies and portraying other nations as "threats". The Trump administration has ramped up the antagonism towards Russia and China in several policy documents, referring to these two nations as "global rivals" in a return of "great power competition". It is no coincidence that as the Trump administration spends ever-more record levels on military it has also escalated the rhetoric of hostility towards Russia and China.

Another fiendish impetus for the vicious cycle, according to Professor Cavell, is that because of the millions more impoverished and unemployed Americans there is a ready recruitment pool to supply the ranks of the US military machine.

"Because this racket is such a lucrative business that has insulated a well-heeled constituency that likes receiving annual high-profit dividends, these leeches on society are the foremost advocates for needless and endless war abroad, which they say can be fought by the unemployed American workers who will jump at the chance of the promise of free healthcare, a clothing allowance, and military rations," says Cavell.

What we have then is a military behemoth serving the profit interests of a powerful corporate elite, not the real interests of the nation's security.

"From Syria to Afghanistan, from Iraq to Libya to Somalia, from Iran to Niger to Venezuela, the US is increasingly wired for war," argues Cavell. He also contends this is why Trump's surprise detente with North Korea has provoked much consternation in Washington, because such a potentially peaceful development conflicts with the fundamental militarist nature of the US economy.

Official figures show that the US military budget, if calculated in constant dollar terms, is now at its highest level compared with any decade since the Second World War. Even during the height of the Cold War against the Soviet Union and Communist China when the US waged massive wars in Korea and Vietnam, today's military expenditure far exceeds past decades.

The US spends more money on its military than the combined total of the next 10 biggest spending nations, including China, Russia, India, Saudi Arabia, Britain and France, according to the Stockholm International Peace Research Institute. Russia's military budget is about a tenth of America's, yet Russia is supposed to represent a top national security threat to the US.

"The American government and society are indeed highly wired for provocation and war," says Professor Cavell. "But all excess has its eventual limits, and that is increasingly witnessed every day with the internal erosion of American society."

The explosion in American poverty and the evident deterioration of social conditions has far-reaching detrimental impacts. American youth can no longer afford higher education because of crippling student debts owing to federal cutbacks. Families are breaking up under the weight of poverty and unemployment. Communities are in disrepair from decimated public services and crumbling infrastructure. The nation's morale is sapped by pathological escapism from abusing opioids and other drugs.

America is undergoing an historic defeat. The bitter irony is this defeat is being inflicted by its military and its grotesque corporate capitalism. US militarism is the country's most pressing national security threat. Because America is its own worst enemy.