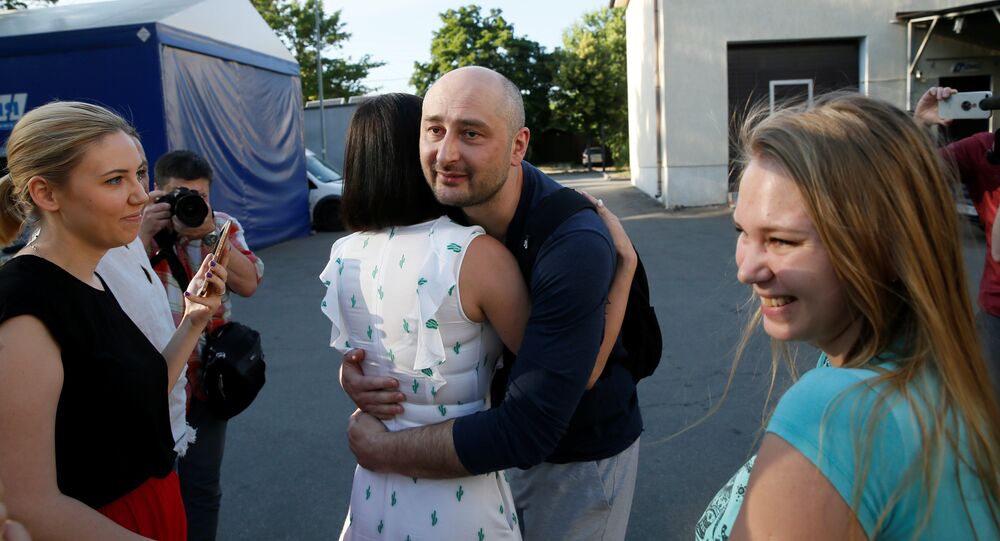 Killed on Tuesday. Attending a Press Conference on Wednesday. When it comes to Lazarus-style recoveries, the ‘anti-Kremlin’ journalist Arkady Babchenko, makes even the Skripals look like also-rans. The fake murder stunt pulled by the Ukrainian authorities, has also made quite a few ‘superior’ people back home look rather stupid.

When 'news' of Babchenko's 'assassination' came out, the west's political and media elite couldn't wait to point the finger of blame at the Russian government. The same people who screech 'conspiracy theorist' at those who claim the British government scientist David Kelly, who was found in a field in Oxfordshire with his left wrist slashed, was murdered, assured us that the FSB, acting on the orders of the Evil Putin, had struck again. Not only that, they ridiculed those who wouldn't share their surety.

'But, but Porton Down, the Russians don't do this. Western conspiracy blah, blah blah. Wake. Up. fgs just wake up' tweeted Giles Dilnot, formerly of the Daily Politics.

© REUTERS / Valentyn Ogirenko
Kiev Court Authorizes Arrest of Suspect in Alleged Plot to Murder Russian Journalist
​Yes Paul, how silly to want to see 'full evidence'. When the Ukrainian government and their neocon allies tell us something, we should all just blindly accept it!

UK Foreign Secretary Boris Johnson declared that he was ‘appalled' to see another ‘vocal Russian journalist murdered'. ‘We must defend freedom of speech and it is vital that those responsible are held to account'. Will Bojo now be pushing for sanctions on Kiev? No, didn't think so.

Appalled to see another vocal Russian journalist, Arkady Babchenko, murdered. My thoughts are with his wife and young daughter. We must defend freedom of speech and it is vital that those responsible are now held to account.

​A man who probably no one outside of Russia and Ukraine had ever heard before Tuesday — and who earned ‘dissident' status for saying that he had 'no sympathy, no pity' for the members of the Alexandrov Ensemble Choir and others killed in a plane crash over the Black Sea on Christmas Day 2016, — was eulogised as The Greatest Journalist Who Ever Lived, whose life deserved to be commemorated in a Hollywood epic.

​'A terrible crime. Arkady was a fearless and brilliant journalist, the best of his generation, committed to telling uncomfortable truths', gushed Luke Harding, author of ‘Collusion: How Russia helped Trump win the White House'. His tweet was retweeted over 600 times, including by some leading members of the ‘Punditocracy'.  ‘I do not know what it is if not the terrorism. There is no other word for it', wrote one person in reply. How about fakery? That fits quite nicely, I think.

Those who didn't reach for their keyboards straight away to type ‘Evil fxxxxxxx murdering FSB bastards', were also lambasted.

Empirical data points to another important improvement in Russia under Putin's leadership. pic.twitter.com/ot5iXZeGsz

​'Ukraine assassination: How  long must we wait before the usual suspects blame Mossad, MI6, the Skripals or Hilary Clinton. Or (more likely) say nothing at all? Complicit silence' tweeted the ‘elderly hack and sage' Michael White.

© Sputnik / Ruslan Krivobok
Russian Journalist 'Killed' in Kiev Doesn't Rule Out Obtaining Ukraine's Citizenship
In fact, those who kept shtum were the wise ones. When I first heard of Babchenko's ‘death' my first thought was: why on earth would the Kremlin do this just a fortnight before the World Cup? Had I tweeted ‘This could be fake news',' I would no doubt have been condemned as a ‘batshit crazy conspiracy theorist' by those who were promulgating batshit crazy conspiracy theories within minutes of the ‘news' coming out from Kiev.

If you're in a hole, you should stop digging. But the anti-Russian commentariat just can't help themselves. Ok, ‘Babs' wasn't killed- but it was all necessary to thwart a Russian plot to kill him.

​As I wrote for Sputnik in April, we've entered the 'Through the Looking Glass World' of Lewis Carroll, where we're being asked by our politicians and 'leading commentators' to believe six impossible things before breakfast.

Only nine days ago we saw a video of Yulia Skripal, looking very well indeed after being poisoned by what we were told repeatedly was the 'deadliest nerve agent known to man'. We learnt earlier in the week that UK medics were treating the Skripals for an opioid overdose without taking any extra precautions, until UK chemical weapons experts at Porton Down 'confirmed' nerve gas poisoning.

It's worth remembering too that Arkady Babchenko is not the only ‘Kremlin-critic' who has miraculously come back from the dead. The neocon 'newspaper of record', The Times, stated that Sergei Skripal had expired on its front page headline on 12th March.

Remember too that we only learnt how the Skripals were doing ‘fine'- and were not in fact on death's door- after Yulia made a phone call to her cousin Viktoria from hospital, which was broadcast on Russian television on 5th April.

© Sputnik / Stringer
Media Bodies Question Kiev's Credibility After 'Murder' of Russian Journalist
The faking of Babchenko's death should make us wonder what else has been fabricated in pursuance of the neocons' anti-Russian geopolitical agenda. Did a 'Russian brigade' really shoot down MH17? How can we be sure of that when Ukraine, which has a clear motive to incriminate Russia, is part of the Joint Investigating Team- and the Ukrainian special services have provided much of the 'evidence'?

The question we should all be asking this weekend- and which in fact has been asked by Off Guardian columnist Catte, is: 'What if Babchenko had decided to stay 'dead?'.

'If he hadn't turned up alive, Arkady dead would have become the thing most people called ‘truth'….. No one- none of us- would think to question it. And anyone who did would be dismissed as a lunatic', Catte writes.

If Babchenko had stayed dead, then British neocons- the real lunatics in our midst- would be demanding fresh ‘punishment‘ against Russia. There would have been renewed calls for Ofcom and/or the government to ‘take action' against Russian media operating lawfully in Britain, such as RT and Sputnik.  Would any mainstream politician or journalist have dared to speak out against the Russophobes? In an age where scepticism of official narratives is shamefully equated to treason- one very much doubts it. But outside of the gates of the Bastille, the people are fooled no more.