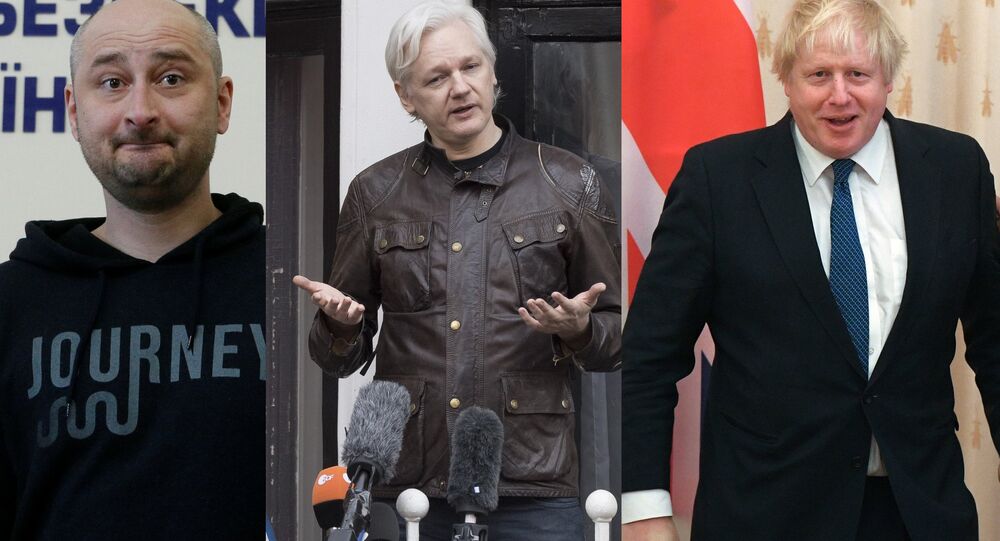 The common denominator bringing together a Russian journalist, who has faked his own death, an Australian whistleblower, confined in an embassy building, and a British politician, known for his gaffes, is the multi-faceted issue of free speech and how it can be exploited.

In their Twitter reply to the post by the UK Foreign Secretary on the "murder" of Russian journalist Arkady Babchenko, the Wikileaks have pointed out that Mr. Babchenko was actually alive and then called out Boris Johnson on his freedom of speech statement.

A good place to start, Mr. Johnson, is by noting that Mr. Babchenko is, in fact, alive, but that the UK continues to spend millions on its illegal attempts to arrest @JulianAssange--in violation of two UN rulings explicitly requiring it to cease doing so. https://t.co/Mb6gXlz7QS https://t.co/FLZJtygHIC

Boris Johnson stressed "we must defend freedom of speech," which promoted a response by Wikileaks, reminding the Minister that "UK continues to spend millions on its illegal attempts to arrest Julian Assange in violation of two UN rulings explicitly requiring it to cease doing so."

This is not the first time Assange's confinement at the Ecuadorian embassy in London has been brought up amid statements by British officials on the significance of freedom of media and speech.

The Wikileaks founder slammed the UK Mission to the United Nations in Geneva, after it criticized the state of media freedom in the Maldives, South Sudan, China, Turkey, Eritrea and Egypt at the 37th Session of the UN Human Rights Council.  The organization published a post on Twitter, saying:

"A free and independent media fulfils a vital role in holding the powerful to account and giving a voice to the powerless."

Mr. Assange — via an account run by his legal campaign — responded with harsh criticism, calling the British authorities out on their "hypocritical" approach.

"And that is exactly why you have detained me without charge for eight years in violation of two UN rulings and spent over 20 million pounds spying on me… Your entire international human rights programme is £10.6m you pathetic frauds."

Mr. Assange has been residing in the embassy since 2012, where he sought asylum following an international arrest warrant issued by Sweden amid allegations against the whistleblower related to sexual assault and rape. In 2017, Sweden revoked the warrant, bringing to an end the legal stand-off that lasted 7 years.

© REUTERS / Peter Nicholls
WikiLeaks founder Julian Assange is seen on the balcony of the Ecuadorian Embassy in London, Britain, May 19, 2017
However, the Metropolitan police may still arrest Assange for breaching his bail in Britain back in 2010. The Wikileaks founder fears extradition to the US, where could face espionage charges for publishing secret US documents through his website.

Supporters of the whistlewblower have been campaigning for his freedom, calling on the UK authorities to uphold Mr. Assange's right to free speech.