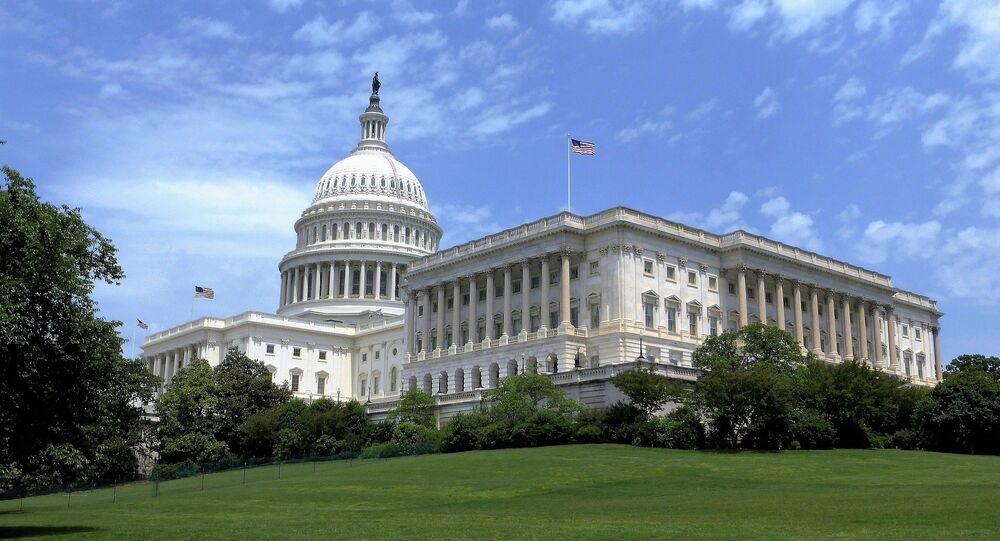 The Empire of Whiners simply can't get enough when it comes to huff, puff and pout as the Empire of Sanctions.

© AFP 2021 / Mark RALSTON
Empire of Whiners
With an Orwellian 99% majority that would delight the Kim dynasty in North Korea, the "representative democracy" Capitol Hill has bulldozed its latest House/Senate sanctions package, aimed mostly at Russia, but also targeting Iran and North Korea.

The White House's announcement — late Friday afternoon in the middle of summer — that President Trump has approved and will sign the bill was literally buried in the news cycle amidst the proverbial 24/7 Russia-gate related hysteria.

Trump will be required to justify to Congress, in writing, any initiative to ease sanctions on Russia. And Congress is entitled to launch an automatic review of any such initiative.

© REUTERS / John MacDougall
Anti-Russian Sanctions Bill 'Will Result in a Tectonic Break Between US, Europe'
Translation; the death knell of any possibility for the White House to reset relations with Russia. Congress in fact is just ratifying the ongoing Russia demonization campaign orchestrated by the neocon and neoliberalcon deep state/War Party establishment.

Economic war has been declared against Russia for at least three years now. The difference is this latest package also declares economic war against Europe, especially Germany.

That centers on the energy front, by demonizing the implementation of the Nord Stream 2 gas pipeline and forcing the EU to buy US natural gas.

© Sputnik / Grigoriy Sisoev
'Let's Cut Them Off From Space': How Russia Could Strike Back at US Sanctions
On the Russia front, what the Empire of Sanctions faces does not even qualify as a hollow victory. Kommersant has reported that Moscow, among other actions, will retaliate by banning all American IT companies and all US agricultural products from the Russian market, as well as exporting titanium to Boeing (30% of which comes from Russia).

On the Russia-China strategic partnership front, trying to restrict Russia-EU energy deals will only allow more currency swaps between the ruble and the yuan; a key plank of the post-US dollar multipolar world.

And then there's the possible, major game-changer; the German front.

The Fools on the Hill

Even without considering the stellar historical record of Washington not only meddling but bombing and regime-changing vast swathes of the planet — from Iraq and Libya to the current threats against Iran, Venezuela and North Korea — the Russia-gate hysteria about meddling in the 2016 US presidential election is a non-story, by now thoroughly debunked.

The heart of the matter is, once again, energy wars.

© Sputnik / Iliya Pitalev
Russia 'Sends a Signal of Restraint' to US by Targeting Obama-Era Sanctions
According to a Middle East-based US energy source not hostage to the Beltway consensus, "the message in these sanctions is the EU has no future unless it buys US natural gas to cut out Russia. To deny Russia the natural gas market of the EU was the goal behind the just lost war in Syria to put the Qatar-Saudi Arabia-Syria-Turkey-EU pipeline in and the opening to Iran for an Iran-Iraq-Syria-Turkey-EU pipeline. None of these plans worked."

The source adds as evidence the 2014 oil price war against Russia, orchestrated by "the dumping of Gulf States' surplus oil or reserve capacity on the world market. Since this has failed to bring Russia to its knees, the destruction of the Russian natural gas market in the EU has become a national priority for the United States."

As it stands, 30% of all EU oil and natural gas imports come from Russia. In parallel, the Russia-China energy partnership is being progressively enhanced. Russia is already geared to increase oil and gas exports to China and Asia as a whole.

The leadership in Berlin is now convinced that Washington is jeopardizing Germany's energy diversification/energy security via the  sanctions war. Russian natural gas and oil is secured by overland routes and is not dependent on the oceans, which, as the energy source stresses, "are no longer under United States control. If Russia in response to United States belligerency drops an Iron Curtain over Europe, and redirects all its natural gas and oil exports to China and Asia, Europe will be utterly dependent on largely insecure sources of natural gas and oil such as the Middle East and Africa."

© REUTERS / Michael Kappeler/POOL
Tensions Running High: How Anti-Russia Sanctions Bill Can Affect EU
And that bring us to the "nuclear" possibility in the horizon; a Germany-Russia alignment in a Reinsurance Treaty, as first established by Bismarck. CIA-related US Think Tankland is now actively discussing the possibility.

Another US business/political source, also a practitioner of thinking outside the (Beltway) box, stresses, "this is what it's all about. That is the true goal of Russia, and the United States has fallen into the trap. The United States has had enough of Germany and what it considers dumping of German products on the United States through rigged currency. They are now threatening Germany with sanctions, and there is nothing Germany can do with the EU on their back facing vetoes from Poland, who is giving them trouble once again. The fools in Congress are really going after Germany, and throwing Germany in the arms of Russia."

The US as the New Carthage

A possible Germany-Russia alliance, as I've written before, rounds up the China/Russia/Germany entente capable of reorganizing the entire Eurasian land mass.

The Russia-China strategic partnership is extremely attractive to German business, as it smoothes access via the Belt and Road Initiative (BRI). According to the business/political source, "the US is at war with China and Russia (but not Trump, our President) and Germany is having second thoughts about being nuclear cannon fodder for the US. I have discussed this in Germany, and they are thinking of renewing the Reinsurance Treaty with Russia. No one trusts this US Congress; it is considered a lunatic asylum. Merkel may be asked to leave for the leadership of the UN, and then the treaty would be signed. It will shake the world and end any thought of the United States being a global power, which it isn't anymore."

© Sputnik / Natalia Seliverstova
German Businesses 'Interested' in Lifting Sanctions to Develop Ties With Russia
The source adds, half in zest, "we think that Brzezinski died under the pressure of the realization that this was coming and that all his hatred of Russia and his life work to destroy them was becoming utterly undone."

So, in a sense, it's "welcome to the 1930s all over again and the rise of nationalism in Europe. This time Germany will not make the mistakes of 1914 and 1941 but will stand against their traditional Anglo-Saxon enemies. The United States has truly become today's Carthage and the disorder in Congress reflects the same stupidity of Carthage facing Rome. Legislators undermined their genius Hannibal as they are undermining the greatest president of the United States since Andrew Jackson. As Sophocles wrote in 'Antigone', 'God first makes mad those he wishes to destroy.' This Congress is mad."

Russian Reaction to Follow if US Adopts Sanctions Bill