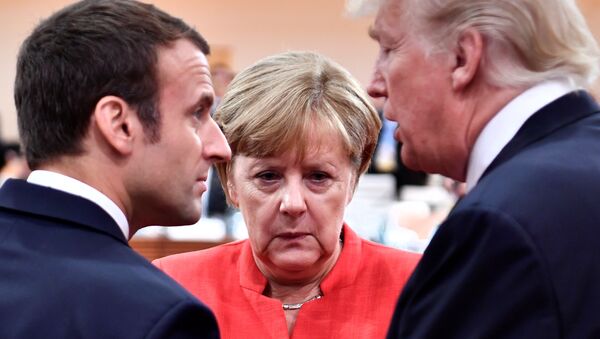 The new US sanctions bill against Russia will lead to serious tensions between the European Union and the United States, according to experts.

New US Sanctions on Russia, North Korea, Iran 'Message From Congress' - Ryan
The US Senate passed in a 98-2 vote a new version of a sanctions bill on Russia, Iran and North Korea, limiting President Donald Trump’s ability to lift the restrictions on Moscow.

The House of Representatives overwhelmingly approved the bill on Tuesday. The chamber voted to attach Iran and Russia to a bill that originally targeted North Korea, which is what the Senate had requested. The bill passed by the Senate retains the stipulation that any attempt by the White House to lift or relax sanctions must go through the US Congress.

In addition, Washington continues to oppose the implementation of the Nord Stream 2 gas pipeline project, citing the alleged adverse impact it exerts on the energy security of the EU.

Association of European Businesses Concerned Over New US Anti-Russia Sanctions
The EU described the new sanctions bill as a unilateral move and said Brussels is ready to "act appropriately" should Europe’s interests not be taken into account.

Brussels’ major concern is that the new sanctions will affect energy cooperation with Russia, in particular the construction of the Nord Stream 2 pipeline.

"Abandonment of the Nord Stream 2 project is spelled out in the text of the bill, but in fact, any project in the EU-Russian cooperation in the field of energy security … may be subjected to sanctions, including pipeline repair work, on which EU energy security depends," Gernot Erler, a member of the Bundestag’s Committee on Foreign Affairs, was quoted as saying by the Neue Osnabrücker Zeitung newspaper.

"These [sanctions] are evident attempts to use their [i.e., the US's] geopolitical advantages in a competitive struggle with an aim to ensure [their] own economic interests at the expense of their allies," Putin said.

Adoption of US Anti-Russia Sanctions Bill to Be 'Extra Cyniсal Move' - Putin
On Friday, the Russian Foreign Ministry suspended the use of all US Embassy warehouses and its compound in Moscow and also offered the US to cut down the number of its diplomatic staff in Russia to 455 people by September 1. Moreover, the ministry said that it reserves the reciprocal right to hit US interests in response to the US sanctions bill.

"Of course such measures are impossible without authorization by the president," Kremlin spokesperson Dmitry Peskov told reporters.

The possible new sanctions are likely to provoke a surge of serious tensions between the US and Europe, according to Alexei Grivach, deputy head of the National Energy Security Fund and an expert with the Valdai discussion club.

"These sanctions will affect a wide range of European companies involved in export projects with Russia. This will result in a new tectonic break between Washington and Brussels," Grivach told Sputnik, adding that the European Commission is considering a "tough response."

According to the expert, the new sanctions will be used as foreign political weapons and a tool to create more jobs in the US at the expense of the European market. They are also a blow to the self-respect of the European Union.

"This time, the US showed no politeness to its European allies. Brussels is not happy with the fact that Washington does not take Europe’s interests into consideration," Grivach said.

He pointed out that the possible new sanctions comply with Donald Trump’s campaign promises.

Trump May Either Sign Anti-Russia Sanctions Bill or Negotiate 'Even Tougher' One
"The point is that the new sanctions follow the logic of Trump’s election program, including creating new jobs, developing domestic energy and equating the trade balance with European countries," Grivach said.

The expert added that during the discussions some of the bill’s provisions were softened and thus "Congress is shifting to Trump the responsibility for tensions with Europe."

Commenting further, he suggested that the scope of consequences of the new sanctions would depend not on Trump, but on Moscow and Brussels.
"Europe needs Russian gas and the Russian market. The question is whether the EU still has leaders who are ready to stand for the interests of Europe," Grivach concluded.

"Previously Europe actively supported Washington’s sanctions against Russia. But the new bill presumes measures that would seriously hit Europe’s interests. This situation is developing towards a conflict. In this situation, Russia would be a bargaining chip," Pravosudov told Sputnik.