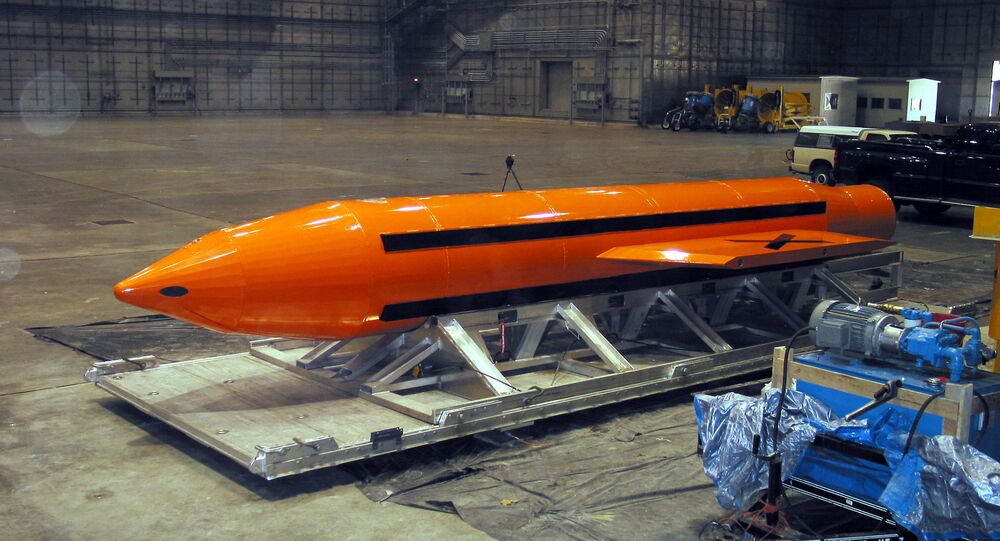 Whether a nuclear war breaks out within the next few days or not – the despicable fact remains, that the entire world is being held hostage by American military madness.

© AP Photo / Ford Williams/U.S. Navy
Poodle Trump Runs With Dogs of War
It seems only a matter of time before the US finally triggers a war with any number of foreign states that it designates as "enemies" – North Korea, Syria, Iran, Russia or China.

Or any other state whom Washington deems to be a "threat" in its paranoid hegemonic view of the world. The common denominator here is US military aggression.

And what makes US military power so dangerous is that the people who run that country are, to be blunt, so stupid – full of their own delusion self-righteousness and ignorance.

US news outlet NBC is reporting that the Trump administration is ready to launch pre-emptive military strikes on the Democratic People's Republic of Korea. Meanwhile, North Korea says that it is prepared to pre-empt any US strikes with a nuclear attack on America or its allies in response to what Pyongyang says is provocative aggression.

© REUTERS / KCNA
N Korea Vows to Launch 'Preemptive Strike' on US Military Bases in Japan, S Korea, US Aircraft Carrier
This weekend marks a major anniversary for North Korea, the 105th birth date of its founder Kim Il Sung. His grandson, Kim Jong Un, the current leader, may be tempted to carry out a sixth underground nuclear weapon test to "celebrate" the occasion, in violation of UN Security Council resolutions. Let's keep in mind, however, that such action by North Korea is only a "test" – not an act of war.

But what is undeniable is that the amassing of nuclear forces – an "armada" as US President Donald Trump calls it – off the Korean Peninsula by Washington is bound to be seen as an aggression by the North Korean leadership. It is arguable that the US is the one that is carrying out an act of war by sailing its forces towards North Korea.

The Trump's administration's launching of 59 cruise missiles on Syria last week, in what was a flagrant violation of international law, was no doubt a calculated signal from Washington that it is willing to use massive military force whenever and wherever it deems, regardless of legalities.

© AP Photo / Abdul Khaliq
Trump's Strike in Afghanistan 'Not Meaningful in Any Strategic Sense'
Then in the past few days, the dropping by the US of the biggest non-nuclear bomb – the MOAB or so-called Mother of all Bombs – in Afghanistan is another calculated step towards obliterating any legal restraint on Washington, as well as again sending a signal to North Korea and others that it is prepared to act unilaterally and preemptively.

All major powers in the Pacific region – including Russia and China – are calling for a negotiated solution to the tinderbox tensions over the Korean Peninsula. But the only power that is refusing to open dialogue is Washington. US secretary of state Rex Tillerson in Moscow this week said there would be no talks to resolve the Korean crisis for the foreseeable future. Why not? Who is the US to dictate that?

Trump has said he will solve the "North Korea problem" alone and with military force. Such a mentality begs the question: who is the rogue state here?

What is even more perplexing than US military force and its arsenal of 4,700 actionable nukes (Russia has 4,500, according to the Arms Control Association) is the foolishness of the American rulers.

© REUTERS / Damir Sagolj
This is What Can Prompt China Not to Defend N Korea in the Event of War
The NBC report cited above says that the White House is ready to order strikes on Pyongyang "should officials become convinced that North Korea is about to follow through with a nuclear weapons test." That's hardly a proportionate response to a "test."

Nevertheless, the truly disturbing phrase here is "should US officials become convinced." Given Trump's trigger-happy disregard for international law and the abject standard of US intelligence, a preemptive US strike on North Korea is therefore highly probable.

Trump's recent aggression in Syria is testament to the unstable, reckless nature of politicians and military chiefs in Washington.

Media reports show that Trump made up his mind to attack Syria with Tomahawk missiles based on his watching of Fox News footage of the alleged chemical weapons attack in Syria on April 4. In addition, the US president reportedly made his decision to launch those strikes at the urging of his daughter Ivanka's emotional reaction to seeing children dying in the alleged chemical incident.

© Flickr / Justin Owens
Tomahawk: Washington's 'Weapon of Democracy' and Harbinger of Aggression
There is good reason to believe that the Syrian chemical weapons incident was a false flag perpetrated by Western-backed terrorist jihadists. Yet based on the most superficial allegations that the Syrian government carried out the chemical weapons attack, the Trump administration went ahead with a murderous assault on that country.

Trump's volatile ego is added into the explosive mix. For weeks now he has been asserting to "take care of the North Korea problem." The assembling of US nuclear strike forces off the Korean Peninsula, in conjunction with faulty US intelligence and a fatuous, egotistical Commander-in-Chief surrounded by gung-ho advisors, are driving the logic for war.

© REUTERS / Kevin Lamarque
Piece of Cake: New Normal of Trump's Foreign Policy
On the other side, the North Korean leadership has taken note of Trump's latest aggression in Syria. It is warning that it might take preemptive action. Seoul, the capital of America’s South Korean ally, is well within the range of North Korea's firepower. With a population of over 20 million, an attack on Seoul would be catastrophic. Once the missiles start flying, the world will likely to be plunged into a global war, dragging in China and Russia in a nuclear confrontation with the US.

This dire prognosis is not inevitable. Dialogue and a negotiated political settlement to the Korean crisis is entirely possible. The two Koreas, Japan, China, Russia and the United States could solve the recurring problem if all sides committed to a peaceful resolution of decades-old military tensions. But the burden of responsibility lies with the US to commit to such talks. It refuses to do so, insisting instead on a military showdown.

What makes the problem so precarious is Washington's bull-headed, arrogant stupidity. Trump is just the latest manifestation of Washington's hubris, with a recklessness that goes beyond previous administrations.

Trump's readiness to use unilateral military aggression – as seen in Syria last week – and in his outrageous deployment this week of weapons of mass destruction in Afghanistan are alarming.

© AFP 2021 / HO
US Plans to Topple Assad Family Go Back Six Presidents, CIA Doc Reveals
But more than this, what is even more alarming is the delusional nature of US "intelligence" and American political "leadership." If the US can launch cruise missiles on Syria based on highly suspect claims over chemical weapons, plus a president who is so gullible and suggestible, then the world is truly being pushed to an abysmal precipice.

Far more dangerous than American nuclear weapons is the incorrigible unscrupulousness of American rulers. These are the same kind of people whose self-righteousness and criminal disregard for humanity led them to launch atomic weapons on Japan 72 years ago. A monstrous act of genocide which they still justify as "being right".

It is an abomination that the world is being held hostage by American military madness. And has been for more than seven decades ever since the Second World War. The question is: can this American madness be defused safely, and brought to a peaceful end?

Trump Proud of Using 'Mother of All Bombs', But It Hardly Can Impact Afghan War