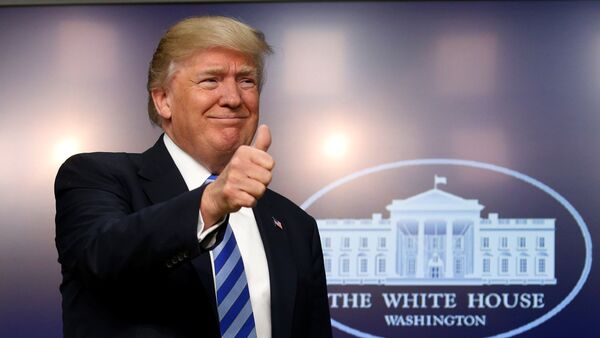 Pepe Escobar
All materials
Here's the Commander-in-chief of the Beautiful Piece of Chocolate Cake School of Foreign Policy, expanding on his next move regarding North Korea.

As if bombing nuclear-armed North Korea would be as much of a piece of cake as Tomahawking a semi-deserted air base in Syria. But then, that's the beauty of a box of chocolates foreign policy; you never know what you're gonna get.

Trump: NATO No Longer Obsolete, Needs to Play Bigger Role Fighting Daesh
NATO was "obsolete." Then it was "no longer obsolete." China was a currency manipulator. Then it was no longer a currency manipulator. There would be no more adventures in the Middle East. Then it's back to pulling a Hillary and bombing Syria. Russia was supposed to be a partner – basically in oil and gas deals, while a Kissingerian Divide and Rule remix would try to unravel the Russia-China strategic partnership. Then Russia is bad because supporting "animal" (sic) Assad.

It's as if the whole dysfunctional Trump administration machine has become a prisoner of its non-stop duty to justify the Tomahawks-with-chocolate Commander-in-Chief's about turns and blatant lies, whereas its previous strength derived from exposing the lies and the hypocrisy inbuilt in the US establishment/deep state nexus.

Xi is on the phone

Russian intelligence may have well inferred – correctly – that the main goal of Secretary of State "T. Rex" Tillerson's visit to Moscow was to quiet

Hardball Diplomacy: Why Trump's Show of Force Leaves Beijing Unimpressed
down the high-stakes game as much as possible as Trump moves to a face off with Pyongyang. Washington simply cannot handle multiple, simultaneous crises in Syria, Ukraine, North Korea, the South China Sea, Afghanistan. The possible deadline is May 9; the South Korean presidential election that could stop any attack by the US on North Korea in its tracks.

Japanese and South Korean media were hysterically reporting on the deployment of as many as 150,000 People's Liberation Army (PLA) personnel, part of the PLA's 16th, 23rd, 39th and 40th Group Armies, to the Chinese-North Korean border. These forces are not aggressive; they'd rather coordinate efforts to alleviate a refugee crisis in the – appalling – event of a Second Korea War breaking out.

The Chinese Ministry of Defense issued a sort of non-denial denial about the deployment. But the crucial element was the subsequent Xi Jinping call to Trump. Priority number one was to dissipate the swelling US corporate media narrative that Beijing would approve a US strike against North Korea (on the contrary; Beijing was seriously worried). Chinese media stressed Xi emphasizing to a volatile Trump the only possible way out is to work towards a peaceful denuclearization of the Korean Peninsula.

Priority number two was to defuse the fake news notion that Xi, facing his Tomahawk-with-chocolate-cake desert at Mar-a-Lago, had agreed to further US strikes in Syria. In his phone call, Xi once again stressed the only way out in Syria is a diplomatic solution.

Tomahawk: Washington's 'Weapon of Democracy' and Harbinger of Aggression
With the Beautiful Piece of Chocolate Cake School of Foreign Policy as the new normal, now no one has a clue what is Washington's policy on Syria, and who's driving it (that was the key information Foreign Minister Lavrov was trying to extract from Tillerson).

The previous policy was obvious; balkanization light, with a Kurdish enclave in the eastern desert, to be run by US proxies such as the small PYD Syrian Kurdish population; Israel absorbing yet another stretch of the Golan Heights; a patch of the north for Turkey; and enough real estate for Sunnis and assorted jihadists.

Even before the Tomahawk show, US military intelligence officials scattered around the Middle East had serious doubts about what became the official White House narrative on the chemical attack in Idlib. Former US intel stalwarts, including Ray McGovern, Phil Giraldi and Bill Binney, even wrote a memo to Trump calling for an honest, independent investigation – as much as Lavrov would later make it clear in his press conference with Tillerson. The official narrative was also debunked by an MIT professor as "totally false."

Coincidence? White Helmets Work Only in 'Areas Where Islamist Groups Operate'
Irrespective of whether Trump saw the light via a White Helmets YouTube video or was Tomahawked by the neocon/neoliberalcon axis, the facts on the ground don't change.

Moscow simply is not going to yield its sphere of influence in Syria to Donald Trump or the deep state. Russia has all but won the Syrian War by preventing the formation of an Emirate of Takfiristan, and defusing the possibility of Russian/Chechen/Uzbek Salafi-jihadis operating in alliance with Jabhat al-Nusra and/or Daesh going back to wreak havoc in the Caucasus. Not to mention that over 75% of Syria's population is now living in the functional parts of the country controlled by Damascus.

When in doubt, sow chaos

The War Party/military-industrial-security-media complex wants war, any war; it's good for business, and ratings. The neocons want a war to contain Iran. Professor Stephen Cohen is realistically alarmed. No one knows for sure whether Trump is now a mere hostage of Mad Dog Mattis, HR McMaster and co. who believes he's actually in charge, or whether he perfected some sort of genius non-twitterable geopolitical jiu-jitsu.

A dissident US intel analyst based in the Middle East paints a much gloomier picture: "The US will not tolerate a Russia-China alliance tilting the balance of power. North Korea and Syria are merely pawns in this struggle that has almost no meaning for themselves. The Russians believe that the US is determined to go to war against them, while they remain unsure about the performance of their S-500 defensive missiles. The Russians say more false flags are to come in Syria, while the Chinese are also reviewing any commitments of the US on the basis of what they saw in Syria."

The Outcome of Tillerson's Highly-Anticipated Visit to Moscow
President Putin has all but stated, on the record, that Moscow cannot trust Washington. Russia has been patiently building up its missile defense capability – to the point that its air space might as well turn out to be impenetrable before the end of the decade.

Lavrov has spoken many times in the past about "managed chaos" – a "method of strengthening US influence" exhibiting "projects" that "should be launched away from the United States in regions that are crucial for global economic and financial development." The Beautiful Piece of Chocolate Cake School of Foreign Policy may have forced everyone to be lost in a masquerade. But Moscow — and Beijing – do seem to see it for what is; yet another facet of unmanageable chaos.