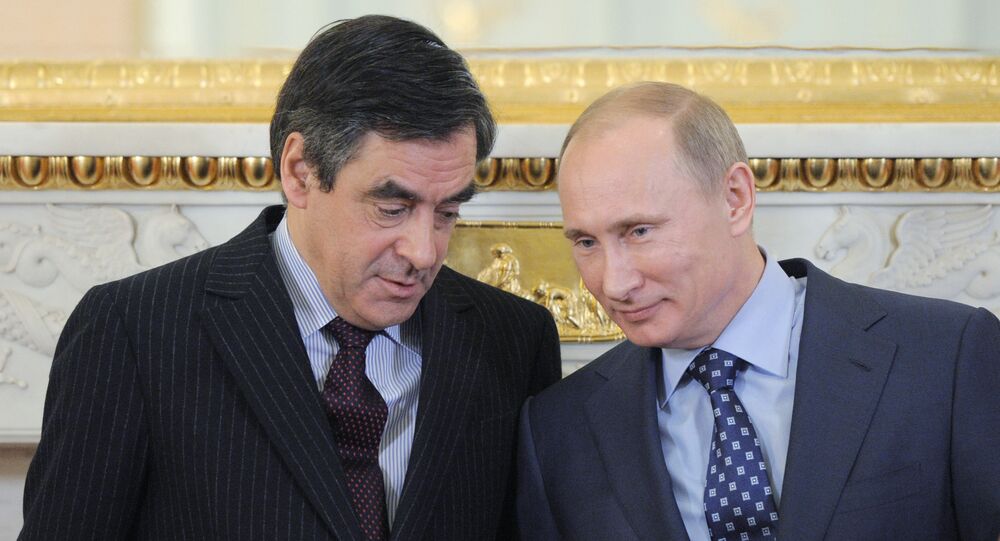 George Soros's worst nightmare is about to become a reality in a key European country – France.

© REUTERS / Philippe Wojazer
French Presidential Hopeful Fillon's Wife Received Over $500,000 as His Aide
In an interview to Le Monde, the likeliest winner of the coming presidential election Francois Fillon called NATO's promise in 2008 to take in Georgia and Ukraine as "irresponsible." For Soros, who in his recent article saw Europe as a battleground for a Manichean fight between "democrats" and "dictators," this must be a sure sign of "Europe falling under the influence of Vladimir Putin."

In reality, Russia's hopes for France are much more modest. They are nothing like the monsters which Mr. Soros creates in his imagination. Contrary to the fake generalizations in the mainstream press, Russia has been looking for understanding not so much in the so called far-right parties inside the EU countries as in the established "center" of European politics. Francois Fillon and his Gaullist party The Republicans represent exactly that – the moderate "right of center" in the French politics.

In the years that followed the worsening of relations with the West after the Kiev coup in 2014, Russia invited even the former president Nicolas Sarkozy, the main architect of the Western intervention in Libya, to several forums in Moscow and St. Petersburg. The aim was not "to dominate Europe," but to find in France a minimally sensible politician, who would not see Russia as a "clear and present danger" (a preferred expression of French Russophobes). Finding such politicians in France would set a stage for a dialogue – an antonym to Mr. Soros's "color revolutions," touted by the Western media and despised by the people in the "revolutionized" countries, from Syria and Serbia to Georgia and Ukraine.

© Sputnik / Vladimir Sergeev
European Left Party Leader Calls Anti-Russian Sanctions 'Mistake'
This aim of a dialogue could not be achieved through the cruel and duplicitous Sarkozy, who only advised Russia to remove its countersanctions against Western foodstuffs "in a gesture of goodwill." (Many a previous gesture of this kind from Russia did not deter NATO's expansion to Russia's borders or any other hostile moves from the US and the EU.) But Russia suddenly found a lot of sympathy among the less elitist French politicians, who represented the pragmatic interests of French business, and not the imperial designs of "spreading democracy" around the globe.

In April 2016, the French parliament, the National Assembly, recommended the lifting of sanctions against Russia.

And now Francois Fillon, an unexpected winner of the primaries in the French rightist party The Republicans, is voicing similar ideas about EU-Russian relations in general. To an unbiased observer, these truths are simple enough to be coming out of the mouth of babes, but for the mainstream media they are dangerous heresies.

"Has the West always been a reliable partner for Russia?" Fillon asked himself rhetorically during a recent interview to Le Monde daily. "Didn't we deceive Russia on Libya, on Kosovo, on the economic partnership with the EU?"

Despite his previous characterizations of Russia as a "dangerous" country, Fillon obviously went beyond the limits of the European mainstream on Russia when he called NATO's invitation for Georgia and Ukraine to join NATO in future "irresponsible."

"Why did we need to deploy anti-missile defense right near the Russian border? We made a lot of mistakes," Fillon said in that same interview.

© AFP 2021 / Bertrand Guay
'Kompromat' Wars Unleashed in France Ahead of Presidential Election, No 'Russian Hackers' This Time
Instead of countering Mr. Fillon by arguments, French politicians and mainstream media prefers "trolling" him by alleging he has "personal connections" to Russia. So far, the only revealed connections were Mr. Fillon's two visits to Russia in the framework of the Valdai Discussion Club (an organization bringing together people with all kinds of views on Russia, including some very critical ones). Also, Fillon and Putin were prime ministers of France and Russia respectively in 2008-2010 and as such they exchanged a few friendly messages. So much for "personal connections."

This, however, did not deter Alain Juppe, Fillon's rival during the primaries of the French right, to "warn" his adversary against "excess of vodka during his meetings with Putin."

© AP Photo / Giuseppe Aresu
Unable to Harm Russia With Own Sanctions, US 'Made EU a Tool in Its Policy'
This cheap insult, however, did not play well with voters, who preferred Fillon to Juppe, making the former prime minister the main candidate of the center-right Republicans.

The lesson also did not go down well with Manuel Valls, the former Socialist prime minister, who is going through the leftist primaries right now in the hope of challenging Fillon later this year during the presidential election. Valls said he would "defend France against both the United States of Trump and Putin's Russia" if elected the president.

Will Russophobia play out for Mr. Valls? There is a strong doubt about this. Valls has already lost the first tour of Socialist primaries to the little known "red and green" candidate Benoit Hamon.

"People like Valls just don't understand that there is a certain fatigue about business as usual in Europe, and Russophobia is a part of the business as usual there," said Gevorg Mirzayan, a specialist on foreign relations at the Institute of US and Canada in Moscow.

Hopefully, the Russophobic part of the business as usual will come to an end. Russia wants only as much as that – and legitimately.