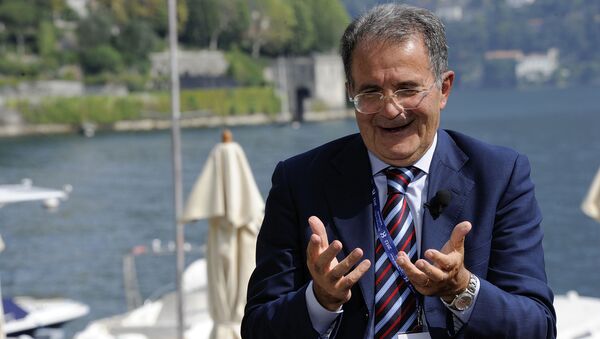 “It is my strong conviction that we need to lift the sanctions against Russia and do it now. We can make sacrifices for solidarity’s sake, but when solidarity is no longer there, let us be the first to act and not leave the US in a privileged position in relations with Russia,” Prodi told La Stampa daily.

In an interview with Radio Sputnik, Moscow-based  political analyst Oleg Matveichev said that Prodi’s statement could have been prompted by the fact that Washington had stopped sending “certain signals” to its allies in Europe.

Austrians Count Cost of Losing 'Paradise Market' in Russia Due to Sanctions
“Until very recently, while Barack Obama was still in the White House, Europeans felt strong pressure to impose ever new sanctions on Russia. This pressure is gone now and every European official feels free to speak out. Prodi was among the first to do so, just a day after Francois Fillon did on Monday,” Oleg Matveichev said.

He added that it looked like the Europeans were driven by economic considerations after all the economic losses they have suffered while toeing Washington’s line.

Oleg Matveichev said that with the American pressure now gone, the EU starts thinking about its own economic interests, especially with its zero growth rate. Resumption of trade relations with Russia will help Europeans bring their economy back on track.

The majority of European leaders realize this, maybe with the sole exception of German Chancellor Angela Merkel  who is now running for a fourth term.

Hungary Lost $6.5Bln Because of Anti-Russian Sanctions
“The Italians, the French and also Hungary, Slovakia and the Czech Republic all want these sanctions to go. In Germany Angela Merkel has found herself in a real fix. She tried to emulate Hillary Clinton’s election campaign. It failed and she now faces a dilemma whether to back off from everything she said before or to try to win using the same old slogans. It is going to be a tough call because members of her inner circle, her friends in Europe and the business community in Germany will see her as a retrograde out of touch with reality. Merkel needs to make her choice now,” Oleg Matveichev concluded.

Russia has been targeted by several rounds of sanctions inflicted by Brussels, Washington and their allies in light of Crimea’s reunification with Russia in 2014 and on the pretext of Moscow's alleged involvement in the Donbass conflict, a claim that Russia has repeatedly refuted.