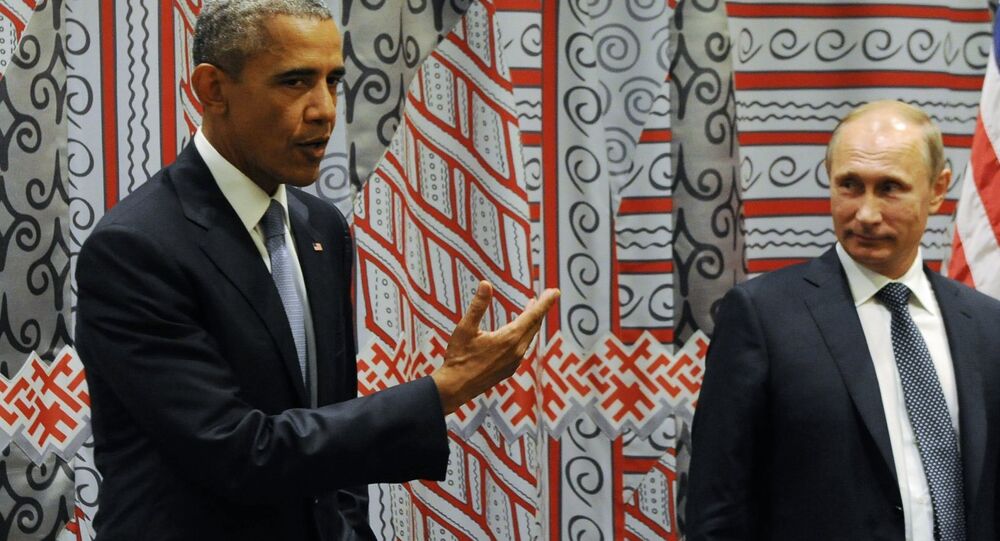 © REUTERS / Jonathan Ernst
'Holds No Water': How Obama Invented 'Russian Hackers'
Not for the first time, the contrast in character between Putin and Obama was illustrated in the latest diplomatic spat over alleged Russian hacking. The temptation to hit back in kind to Washington's sanctions must have been great for Moscow. But in the end, the Russian leader probably showed that the best response was to simply ignore Obama's clumsy stupidity.

With typical histrionics and contrived fanfare, the White House announced that it was expelling 35 Russian diplomats, whom it accused of being "spies" and of alleged hacking during the US presidential election in November. Initially, Moscow appeared ready to reciprocate with an equivalent banning of American officials.

However, President Putin then made a surprise attack. He said that his government would not take retaliatory measures. Indeed, he went further by offering seasonal goodwill greetings to President Obama, his family and the people of America, as well as repeating invitations to the children of accredited US diplomats in Russia to festivities being held at the Kremlin.

It was a brilliant move on Putin's part, which even arch-Putin-haters like US Senator John McCain were obliged to admit as being "smart".

For one thing, Putin's gracious magnanimity in the face of American provocations shows the Russian leader to be a fine statesman and human being; whereas Obama looks like a pathetic, cheap nonentity. The outgoing US president is ending his career on a low, grubby note, dangling between the sewer and the gutter.

In the season of goodwill, the Russian leader is the one who rises to the occasion with dignity. Obama, on the other hand, is seen to be a tawdry tinpot.

© Sputnik / Sergey Guneev
Happy New Year, America! The Message of Putin's Response to New US Sanctions
But there's another reason why Putin's response was right. The unscrupulous Americans are trying their best to antagonize Russia with slander and deeply personal attacks on Putin's character. It is a sordid display that is best left to fume in its own festering pile of lies.

If Moscow were to "stoop to that level", as Putin put it, then that only tends to give the Americans a false and undeserved image of credibility.

That's not to say that one must always turn the other cheek, so to speak. Sometimes self-defense and even retaliation are justified and necessary.

Nevertheless, there are times when an aggressor is best dealt with by letting him rant and rave, spit and foam at the mouth. It then becomes apparent that the antagonist has no credibility nor decorum.

The latest US-led media campaign to demonize Russia concerning the alleged hacking of the presidential election is transparently mendacious. The American political establishment including the dominant news media are shooting themselves in the foot by piling up what is a fake narrative impugning Russia.

Sooner or later this narrative is going to implode and be exposed as a baseless propaganda stunt. We can be certain of this outcome because there is no evidence whatsoever to support the grandiose claims of Russian cyber attacks.

Obama has staked the supposed authority of the White House to accuse Putin of personally overseeing Russian cyber operations.

© Photo : The White House
Last-Ditch Efforts: Obama's Anti-Russian Sanctions 'Will Come Off Like Dust'
As if struggling to shore up some kind of credibility in these tall tales, the Washington Post ran a story over the weekend claiming that Russian hackers have now gone on to attempt disabling the US electric grid. Despite sensational headlines and bluster, there is not one scrap of verifiable evidence of any Russian interference.

As US-based political analyst Randy Martin told this author: "The whole official American narrative against Russia is based entirely on wild, untenable speculation and conjecture. And the US media have bought into this nonsense like a stampeding herd."

Martin, who writes at crookedbough.com and has expertise in computer hacking methods, said the claims against Russia would be thrown out of any court due to the paucity of proof. He uses the following analogy to depict how insane the official US logic against Russian is. "It would be like planting a gun in the vicinity of the White House and then accusing Russia of a plot to assassinate the president… The premise is ludicrous."

© AFP 2020 / MOLLY RILEY
'Russian Hackers' and the Coup Against Trump
Sure enough, Russia has repeatedly dismissed Washington's claims as asinine. And that's why Putin was prudent to not escalate sanctions with Washington. The American rulers want to embroil Putin in a worsening confrontation because when punches start to get thrown around then in the ensuing dust-up it can become unclear who the real aggressor is. Moreover, the resulting melee can make the aggressor look as if he has some credibility. When in fact, there was no credibility from the outset.

Washington's allegations against Russia over cyber interference, as with other geopolitical matters such as threatening Europe's security, are baseless. By goading Russia into a response only makes the baseless claims seem to have foundation and thus permit further demonization.

When this "psychological operation" – initiated by the CIA and peddled by the White House and mainstream media – collapses from its own bombastic weight, the credibility of the American political establishment will be damaged beyond repair in the eyes of its populace and the world. The American political establishment is already floundering from fake news episodes and its failed attempt to stitch up the presidential election against Donald Trump in favor of Hillary Clinton.

© AP Photo / Evan Vucci
Here's Why Washington Won't Be Able to 'Transform' Trump
Trump is well aware that the establishment is peddling the "Russian hacker" propaganda narrative as a rearguard action to discredit him. And to force him into an adversarial position towards Russia.

The president-elect, who moves into the White House on January 20, praised Putin for his "smartness" in refraining from counter-sanctions in response to Obama's expulsion of Russian diplomats last week.

Trump also returned cordial seasonal tidings to President Putin. There is a good chance that Trump will deliver on his promises to restore normal relations between the US and Russia when he takes office and to revoke all the sanctions that the Obama administration has recklessly slapped on Russia since the Ukraine crisis in 2014.

If Putin were to have taken the bait brandished by Obama, and then proceeded to eject American diplomats, the dynamic could have led to deeper recriminations between Washington and Moscow that even a new, more amenable presidency under Trump may not have been able to repair. No doubt that was in the calculations behind Obama's CIA-inspired gambit.

© REUTERS / Kevin Lamarque
By Imposing New Anti-Russia Sanctions, 'Obama Trying to Make Sure Trump Won’t Back Off Easily'
A broader point here is that US hegemonic desires in international relations are fully dependent on demonizing rivals and instigating wars. The confrontation with Russia is illustrative of how American power really works. It needs to create enemies in order to give its own depredations a political and moralistic cover.

Washington, its servile European surrogates and their subservient media may designate Vladimir Putin and Russia as an "enemy". However, Putin's discretion is the better part of valor on this occasion by refusing to play the role being assigned to him.

Putin's stoic statesmanship speaks for itself. Not so the gibbering nonsense of Obama and other Western stooges. Their day of reckoning in the public court is coming.