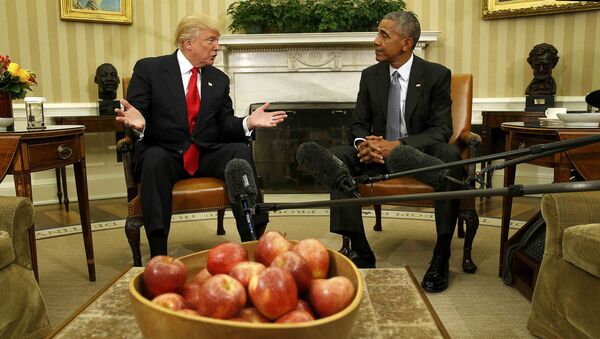 New Obama's Sanctions on Russia 'Last Challenge' to Trump
MOSCOW (Sputnik) — On Thursday, US outgoing President Barack Obama announced the expulsion of 35 Russian diplomats, the closing of two Russian diplomatic compounds in Maryland and New York and new sanctions against six Russian individuals and five entities over Moscow's alleged interference in the November US presidential election.

"I think he is preempting Trump because Trump is likely to have more favorable policy towards Russia that reflects real interest rather than some illusionary ones. Obama is trying to make sure that Trump won’t back off on sanctions easily because it appears that Trump would be going against secret services on this issue," the President of the American Institute of Business and Economics in Moscow, Art Franczek, told Sputnik.

Obama's Sanctions on Russia Meant to Take 'Leverage Away' From Trump - Giuliani
From his point of view, however, "it is likely that Trump will try to back off on sanctions once he takes the office."

Franczek noted that the US president was trying to "satisfy hardliners in the states like [John] McCain and Lindsey Graham" due to the Congress' hardline against Russia.

Dmitri Suslov, deputy director in the Center for Comprehensive European and International Studies in Moscow Higher School of Economics, supported the view, stating that by launching sanctions against Russia Obama tried to reach two main objectives: to maximally complicate the normalization of the Russia-US ties and use this issue as a tool for de-legitimizing his successor.

"I think, this is a sign of [Obama’s] aspiration to make life difficult for Trump and to hinder as far as possible the improvement of the US-Russian relations," the expert suggested.

He also mentioned that Russia was intentionally forced to mirror Washington's "unprecedented step, not seen since the worst times of Cold War" and to expel in retaliation 35 US diplomats and close two US establishments in Russia.

New Obama's Sanctions on Russia 'Last Challenge' to Trump
"This will complicate the possibility of a quick establishment of Russian-American interaction for the Trump administration. Trump will have to begin from a very low start in dialogue with Moscow," Suslov said.

"The fanning the hackers issue creates a certain agenda for Trump's administration, so that they cannot brush this issue aside and have to continue to engage with this alleged hacking, committed with the knowledge of senior Russian leaders, into the US NDC," he said.

According to him, in the event that Russian involvement is proved it would also be a blow for Trump.

"Trump's administration would be disgraced inside the country thus its legitimacy would be questioned while the possibility to take some bold steps, both in domestic and foreign policy, would decrease," Suslov asserted.

Russia Will Determine Steps in Restoring Ties With US Depending on Trump - Putin
The question of influencing Trump's administration was also raised by Turkish diplomat, former Trade Representative in Russia and Egypt Aydin Sezer, who explained that the Obama administration is trying to set boundaries within which the elected president is able to proceed in regard to relations with Russia.

"I think that the main reason for the expulsion of Russian diplomats — is a measure of the American establishment against perceived warming relations with Russia after Trump taking office… Trump, if he finds these warnings superfluous, will have to exert a lot of effort in order to reduce the negative consequences of these actions," Sezer told RIA Novosti.

He stressed that a key factor behind the decision was the recent US presidential election and its outcome, stating that "I seriously doubt that such a decision would have been made if Hillary Clinton won."

The expert surmised that the action was taken due to US concerns regarding Russia's recent actions, and the extent of their influence on international events.

000000
Popular comments
First. I am not inclined to believe that whenever I see, read or hear the phrase "experts told Sputnik", that both I and Sputnik will not have a difference of an opinion about an opinion right there. Second, Obama has already proven that he is a lightweight when compared with Trump, or anyone else that I know that he has interacted with. You would think that 8 years would have polished this man's innate ignorance up to a certain degree, but he insists on acting more of an idiot than his predecessor, George W. The truth is, that George gave us a conflict in the Middle East by lying. On the other hand, by lying Obama kept us there. I can forgive the great lie of 911, but I cannot forgive the need to keep on lying to prove that you are somebody important, to anyone, when the evidence, Sputnik, contradicts that.
marcanhalt
31 December 2016, 08:18 GMT1
000000
In this case, I'm inclined to take these particular experts' word for it, [for real!] given their backgrounds.
double bonus
31 December 2016, 09:00 GMT1
000000
Newsfeed
0
New firstOld first
loader
LIVE
Заголовок открываемого материала
Access to the chat has been blocked for violating the rules . You will be able to participate again through:∞. If you do not agree with the blocking, please use the feedback form
The discussion is closed. You can participate in the discussion within 24 hours after the publication of the article.
To participate in the discussion
log in or register
loader
Chats
Заголовок открываемого материала
Worldwide
InternationalEnglishEnglishMundoEspañolSpanish
Europe
DeutschlandDeutschGermanFranceFrançaisFrenchΕλλάδαΕλληνικάGreekItaliaItalianoItalianČeská republikaČeštinaCzechPolskaPolskiPolishСрбиjаСрпскиSerbianLatvijaLatviešuLatvianLietuvaLietuviųLithuanianMoldovaMoldoveneascăMoldavianБеларусьБеларускiBelarusian
Transcaucasia
ԱրմենիաՀայերենArmenianАҧсныАҧсышәалаAbkhazХуссар ИрыстонИронауОssetianსაქართველოქართულიGeorgianAzərbaycanАzərbaycancaAzerbaijani
Middle East
Sputnik عربيArabicArabicTürkiyeTürkçeTurkishSputnik ایرانPersianPersianSputnik افغانستانDariDari
Central Asia
ҚазақстанҚазақ тіліKazakhКыргызстанКыргызчаKyrgyzOʻzbekistonЎзбекчаUzbekТоҷикистонТоҷикӣTajik
East & Southeast Asia
Việt NamTiếng ViệtVietnamese日本日本語Japanese中国中文Chinese
South America
BrasilPortuguêsPortuguese
NewsfeedBreaking
11:11 GMTSouth Korea to Provide Iran With 1Mln Doses of AstraZeneca Vaccine, Reports Say
11:00 GMTFacebook Whistleblower to Testify About Online Harm as UK MPs Consider Online Safety Bill
10:53 GMTTraces of 'Ancient Life' Found in 2.5 Billion-Year-Old Ruby for the First Time
10:47 GMTMicrosoft Notifies Over 600 Companies They Were Targeted in 23,000 Cyber Intrusion Attempts
10:26 GMTFacebook Employees Reportedly Sought to Crack Down on Right-Wing Media Outlets
10:13 GMTSovereignty Council Head Burhan Declares State of Emergency in Sudan, Dissolves Government
10:08 GMTAssange's Fiancée and WikiLeaks Editor-in-Chief Hold Press Conference Ahead of Extradition Hearing
10:00 GMTTwo Polish Soldiers Wounded in Border Assault by Illegal Migrants
09:22 GMTInsulate Britain Climate Campaigners Return to Block Major Roads in London - Videos
09:05 GMTMoscow Slams EU and US for Failing to Unfreeze Afghanistan's Assets
08:59 GMTAlec Baldwin Was 'Drawing Gun and Pointing It on Camera' Moments Before Deadly Shooting
08:28 GMTQueen Elizabeth 'Misses Church' Due to Health Concerns After Hospital Stay
08:28 GMTGerman Ambassador Calls Surging Gas Prices Pan-European Issue
08:25 GMTKashmiri Students Beaten Up in Punjab After India Loses Cricket Match to Pakistan
08:18 GMTUK Government's Transparency Was Worst on Record in 2020, New Report Alleges
07:37 GMTFinnish Defence Ministry Demands Risk Assessment for Nuclear Plant Project Over Russian Ties
07:36 GMTCOVID in Israel May Be Under Wraps Now, But a Fifth Wave Looms Large, Experts Warn
06:23 GMTDenmark Sees Record Infection Spread Despite High Vaccination Rate
06:05 GMTUK Autumn Budget: Labour Shadow Chancellor Accuses Treasury of 'Smoke and Mirrors' Policy
05:31 GMTLive Updates: Sudan's PM Transported to Unknown Location After 'Refusal to Back Coup'