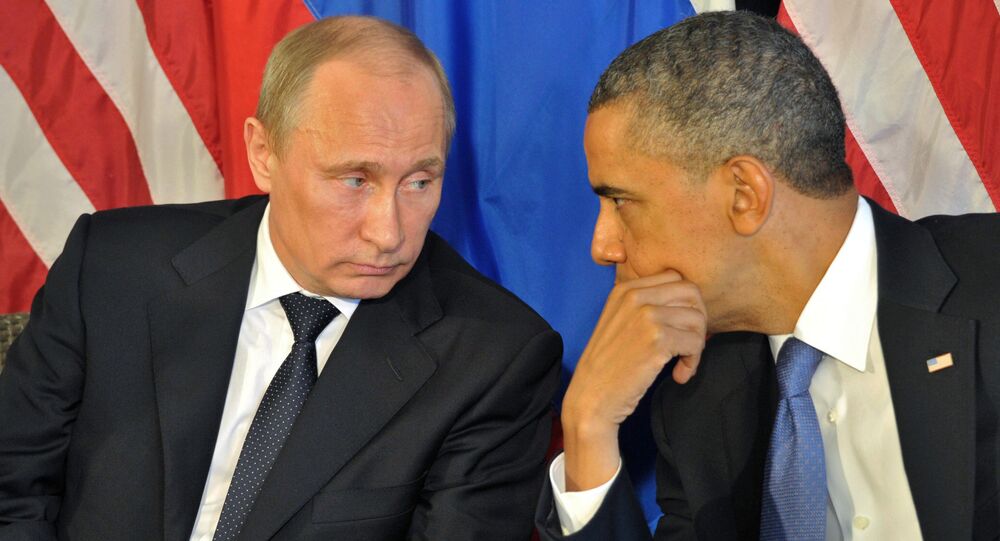 Despite a glaring lack of evidence to support allegations that Russia interfered in the US presidential election, the White House has announced that they will be imposing sanctions on the nation.

© AP Photo / Carolyn Kaster
US Intelligence Services Sued to Reveal Claimed Evidence of Russian Hacking
On Thursday, the US sanctioned six Russian individuals, including the head of Russia's Main Intelligence Directorate, as well as five entitities. The US is also expelling 35 Russian diplomats, who now have 72 hours to leave the nation.

The Federal Security Service is comparable to the US FBI, meaning that this will effectively block any counter intelligence operations between the two nations.

Additionally, the US will be closing two Russian diplomatic compounds in Maryland and New York, which the US claims were used for intelligence related activities.

"These actions are not the sum total of our response to Russia’s aggressive activities. We will continue to take a variety of actions at a time and place of our choosing, some of which will not be publicized," the White House said in a statement. "In addition to holding Russia accountable for what it has done, the United States and friends and allies around the world must work together to oppose Russia’s efforts to undermine established international norms of behavior, and interfere with democratic governance. To that end, my Administration will be providing a report to Congress in the coming days about Russia’s efforts to interfere in our election, as well as malicious cyber activity related to our election cycle in previous elections."

The Kremlin has responded to the sanctions by promising a "mirror response," that will make Washington officials "feel uncomfortable."

President Vladimir Putin will personally determine the response, which a Kremlin spokesman says will be adequate.

During a conference call with reporters on Thursday afternoon, a senior White House official asserted that retaliation is necessary.

“We will not tolerate the abuse of our systems, including our election systems, from foreign entities,” the official continued.

Previously, Obama stated that there was no evidence that Russia tampered with the votes on November 8.

“We were frankly more concerned in the run up to the election to the possibilities of vote tampering, which we did not see evidence of,” Obama said earlier this month during an interview with the Daily Show. “And we’re confident that we can guard against.”

The official, speaking on background, also stated that “there is no debate in the US administration about the fact that Russia interfered in the election."

"These are executive actions… hypothetically you could reverse these sanctions, but it would not make a lot of sense," the official said.

The Kremlin has denied any involvement in the hacks on the Democratic National Committee or Clinton campaign chairman John Podesta. The claims have also been disputed by veterans of both the CIA and the NSA.

“If hacking were involved, the NSA would know about it, and so they would also know the sender and the recipient,” former CIA analyst Ray McGovern previously told Loud & Clear on Radio Sputnik. “There’s no reason in God’s world why they wouldn’t reveal that if they had it.”

© AFP 2021 / JONATHAN ERNST
Trump-Obama Sanctions Standoff: Punish Russia v 'Get On With Our Lives'
The Trump transition team has also contested the validity of the claims.

"If the CIA Director [John] Brennan and others at the top are serious about turning over evidence … they should do that," Trump aide Kellyanne Conway said on CBS’ Face the Nation earlier in the month. "They should not be leaking to the media. If there's evidence, let's see it."

Conway went on to call retaliation against Russia “a political response” at the behest of “Team Hillary.”

In November, members of the Senate Intelligence Committee urged the White House to declassify “additional information concerning the Russian Government and the U.S. election,” but they have still not received any response.

President Obama had ordered the intelligence community to prepare a full report on the their findings regarding Russia and the election before he leaves office on January 20. The incoming president-elect has stated that the US needs to “get on with our lives,” in response to the allegations against Moscow.

On Thursday, Russian Foreign Ministry’s special envoy Andrey Krutskikh said that Moscow hopes any sanctions imposed by Obama will be lifted by the incoming administration.