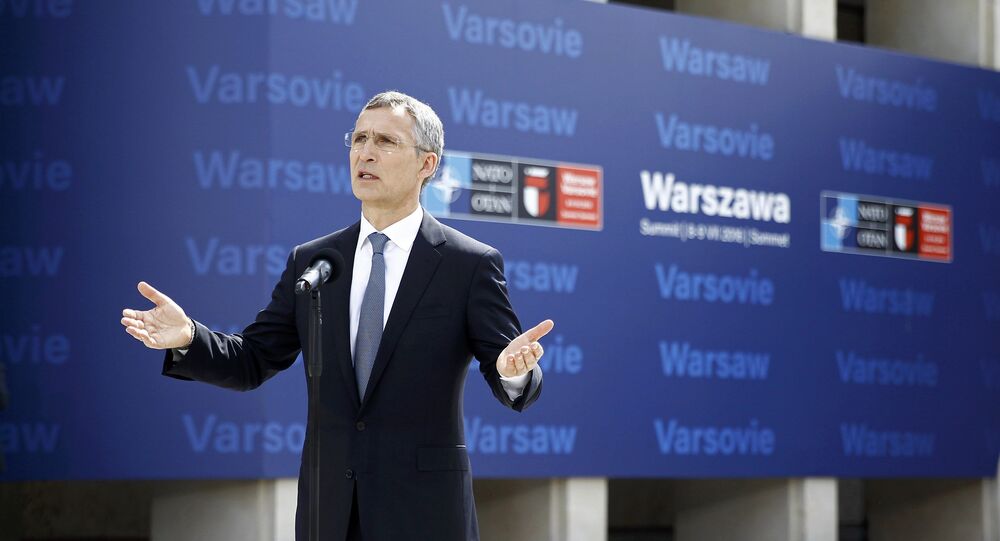 As the NATO summit in Warsaw gained traction, Kremlin spokesman Dmitry Peskov could not contain a wry observation; "We aren't the ones getting closer to NATO's borders.”

This is a statement of fact. But NATO does not dwell on facts; only myths. One of the Beltway’s ironclad myths is that NATO periodically drags the US back into its “traditional role” of guaranteeing the security of Europe. It’s actually the other way around; Washington periodically needs to re-imprint on European vassals the absolute need for more NATO.

For too long NATO had been focusing on “out of area” operations; since at least 1993, when the concept first sprang up.

© AFP 2020 / Petras Malukas
NATO 'Produces Crises to Justify Its Own Existence'
This has resulted in NATO “projecting stability” in Afghanistan – miserably losing a war to a bunch of tribesmen with Kalashnikovs — and Libya — turning a stable nation-state into a wasteland ravaged by militias.

That’s still far from over. Just look at item II of the Warsaw summit: “Projecting stability”. Here’s the mission: “To safeguard security at home, NATO must also project stability beyond its borders.”

That’s NATO as Global Robocop – a project bound to pick up speed again in case the official neocon/neoliberalcon candidate, Hillary Clinton, is in command of the White House in 2017.

Most of all NATO is now back to its (remixed) Cold War mission of confronting Russia. That’s the key theme of the Warsaw summit – and beyond, whatever the spin.

© REUTERS / Kacper Pempel
NATO Uses Anti-Russia Propaganda to Justify Militarization – Peace Movement
So it’s all about “Russian aggression”. And to spin it, NATO is bent on creating a New Iron Curtain, as plastic as it may be, from the Baltic to the Black Sea, and mightily deliver that “clear message” enounced by secretary-general Jens Stoltenberg; "If any of our allies is attacked the whole alliance will respond as one."

The New Iron (Plastic?) Curtain for the moment takes the form mostly of four puny multinational battalions deployed on a rotational basis to Estonia, Latvia, Lithuania and Poland.

And this while the real “threat” to NATO members is not Russia, but what pertains to a taboo debate in Europe; the blowback for Washington’s direct and indirect Middle East blunders — from Shock and Awe to “leading from behind” to weaponizing “moderate rebels”, classic Empire of Chaos moves that contributed to a massive refugee crisis.

The best way Stoltenberg could frame it is that "we will establish a framework to deal with threats and challenges from the south".  In NATO speak “south” means, in theory, ISIS/ISIL/Daesh active in MENA (Middle East/Northern Africa). But not al-Qaeda spinoffs who may be bundled as “moderate rebels”.

© REUTERS / Francois Lenoir
Stoltenberg: ‘NATO Does Not Want New Cold War’ With Russia
Stoltenberg also insists, "We don't want the new Cold War." Yet NATO’s projection of “stability” on the ground spells otherwise. And if there were any doubts that the EU and NATO are one in the whole project, the joint declaration signed in Warsaw by Stoltenberg, president of the European Commission (EC) Jean-Claude Juncker and president of the European Council Donald Tusk dispels them for good.

After all, even the British establishment has been forced to admit that the EU, from the beginning, was a CIA project, as much as NATO is a Pentagon spin-off.

Check out our trade deal projection

So this is the “project” NATO has to offer to the West – and the Global South. Let’s see what’s happening on the other side.

© AFP 2020 / Vladimir Simicek
Cameron and UK Diminished as NATO Ponders Brexit Fallout
A game-changer took place only a few days ago, at the annual summit of the Shanghai Cooperation Organization (SCO) in Tashkent. The SCO is now in the process of turning geopolitics upside down. Not accidentally a key thermometer of the Beijing leadership’s state of mind compared it with the fracture of the super-continent Gondwana 180 million years ago.

As Brexit may have prefigured the slow motion implosion of the EU – to the consternation of the elites who run the Empire of Chaos – the SCO was admitting both India and Pakistan into its fold. It’s too early to identify the long-term winners in the post-Brexit geopolitical configuration. The Beltway hysterically proclaimed, “Putin won”. Beijing, in a measured response, admitted that the US dollar won. Moscow, without enouncing it, considered that the Russia-China partnership might have won.

Once again, it’s all about massive Eurasian inter-connectivity – reflected in the non-stop action to build multiple economic corridors. That involves, for instance, the development of the China-Europe freight train service, now growing steadily under the “China Railway Express” brand. Trade, investment and infrastructure projects are booming all across Eurasia – from the Hungary-Serbia railway to the Qamchiq Tunnel in Uzbekistan, from power transmission lines in Kyrgyzstan to the China-Central Asia natural gas pipeline system.

Chinese Commerce Minister Gao Hucheng practically gave the road map away, when he stressed that future regional economic cooperation will happen within the framework of the SCO, and guided by One Belt, One Road (OBOR), the official Chinese denomination for the New Silk Roads.

All this may be possible because the SCO — unlike EU-NATO — is neither an alliance nor a union. It took the SCO years to define its core mission; are we the Asian NATO or are we a trade bloc? The SCO is in fact a mutant, a hybrid; a very Asian, pragmatic concept of unity in diversity.

“Open regionalism” is not far off the mark. For instance, India can be part of the SCO but also maintain some symbiosis with the US.

Yet some key concepts are clear, especially the concerted drive to build an all-encompassing infrastructure capable of unifying in practice all its members, from Southwest to South, Central and East Asia.

This is all part of a complex, highly strategic Chinese geopolitical project – which involves turbo-charged trade/commercial relationships with every player from Europe to Central Asia to Southeast Asia.

No wonder the president of AIIB, Jin Liquin, has been adamant to emphasize OBOR projects will be supported by AIIB; what they need is to “promote growth, be socially acceptable and be environmentally friendly.”

As much as Russia will be deeply implicated in Eurasia integration, Moscow also keeps a close eye on the European front. Russia and Germany may still be far from forming a strategic partnership, but they are on their way. Economics Minister Sigmar Gabriel is on record saying sanctions should be lifted; he’s also a supporter of Nord Stream II, which will increase the capacity of the original Nord Stream pipeline.

© Sputnik / Maksim Blinov
Steinmeier 'On the Right Track' in Trying to Normalize Ties With Moscow
German Social Democrats always keep in mind that the spirit of Willy Brandt’s Ostpolitik must be kept alive, and expanding.

Were he still alive, Zhou Enlai might say it’s too early to tell whether post-Brexit Britain will establish a new, geo-financial alliance with China. What’s certain is that the City of London salivates with the prospect of offering its financial services to the benefit of Eurasia integration. Beijing, for its part, seems quite certain that “the US is unable to beat down the Chinese dragon and the Russian bear at the same time”; so Eurasia integration business involving both strategic partners should keep advancing.

Under these circumstances, what does the Beltway really want?

The British Army's annual conference on Land Warfare took place only a few days before Brexit. As reported by one of the conceptualizers of Shock and Awe – actually the destruction of Iraq – the money quote was what a US Army general told the conference. He said that for the Pentagon, the top priority was "to deter and if necessary defeat Russia in a war."

So in the end it all comes down – predictably — to a Dr. Strangelove scenario. NATO’s new “projecting stability” normal, as stated in Warsaw, is just one more pointless P.R. exercise masking the real agenda; the Pentagon bent on planning for the dire possibility of a hot war with Russia.

US to Deploy 1,000 Troops to Poland in Support of NATO Mission - Obama