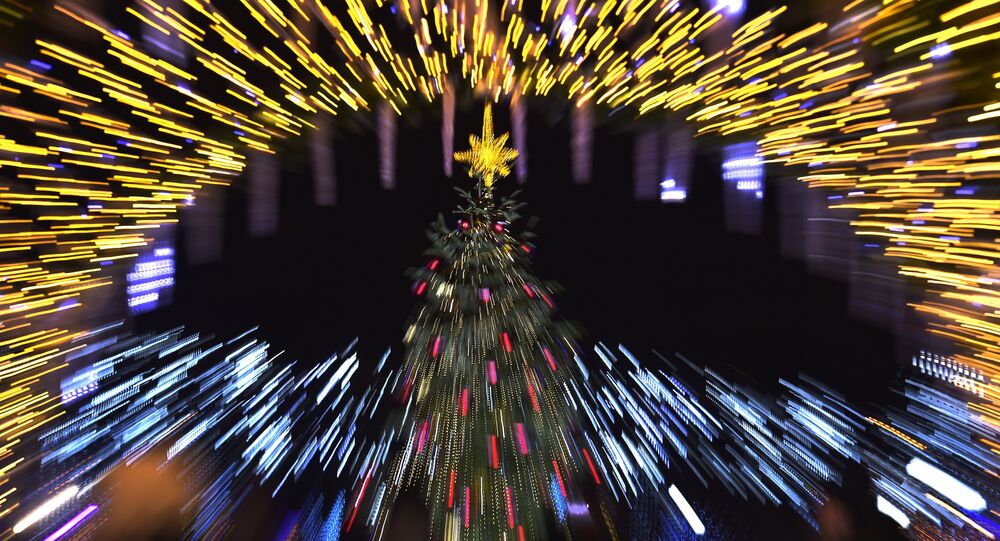 Christmas Then… and Now

Demonically, in time for Christmas, we learn that the rulers of the United States of America had plans at one time to wipe out humanity with nuclear war.

As Christians around the world celebrate the birth of God’s son, Jesus, some 2,000 years ago, the revelation of a demonic plan to extinguish life on Earth by the US is a shocking realization about the nature of evil in the modern world.

This week, in the days before the annual Christmas festival, declassified papers obtained by legal force from the US National Security Archive reveal that war planners in Washington were ready in the 1950s to launch nuclear weapons on thousands of cities and other population centers of the Soviet Union in the event of war.

© CC0 / NNSA / Nevada Site Office / The BADGER explosion
Das Ist Impossible! Germans Are Shocked That US Nukes Would Also Hit Them
The declassified documents were acquired only after nearly 10 years of legal campaigning to bring the secret papers to public knowledge.
Disturbingly, we may rightly assume that other such nefarious plans remain hidden in Washington – yet to be declassified.

The latest release is said to be the most comprehensive nuclear target list ever made public. The list of 1,200 cities assigned for nuclear annihilation by the US Strategic Air Command included Moscow, Berlin and Warsaw, as well as Beijing, presumably because Communist China was considered an ally of the Soviet Union.

© AFP 2020 / BRENDAN SMIALOWSKI
Doomsday Protocol: US Plans to Nuke the World Revealed by Cold War Era Target List
Firstly, it is already known that US military chiefs at the Pentagon wanted to launch a pre-emptive nuclear war on the Soviet Union in the early 1960s. US President John F Kennedy was presented with this plan in July 1961 by his Joint Chiefs of Staff and CIA director Allen Dulles.

The demonic theory then was that such a pre-emptive attack could be carried out because the US supposedly had a nuclear edge over the Soviet Union, which would be so devastated from a first strike that it would not be able to retaliate.

Kennedy to his eternal credit was disgusted by the military plan and ruled it out. On hearing about it from his Generals, led by Lyman Lemnitzer, Kennedy reportedly threw it out, saying to an aide with revulsion: “And we call ourselves the human race.”

Secondly, the US is the only country to have ever used nuclear weapons, having dropped two atomic bombs on Japan in August 1945, which resulted in over 200,000 instant deaths. That any nation could carry out such an act and never to have apologized for it – indeed has continued to make excuses for the act of genocide – is truly illustrative of an exceptionally evil mentality.

Few other states have expressed such self-righteousness in carrying out mass extermination. The United States finds itself in the historical company of Nazi Germany in its professed right to wipe out millions of fellow humans on the basis of ideological supremacy.

© AFP 2020 / John MacDougall
Don't Fall in the Same Trap Twice: Germany to Consider Banning Nazi Party
This gives new meaning to the notion of “American exceptionalism” reiterated only weeks ago by US President Barack Obama with narcissistic and delusional belief that the United States is a paragon of virtue for the rest of mankind.

Russian President Vladimir Putin has said that he hopes no-one would be insane enough to ever use nuclear weapons. There speaks a leader who has a modicum of morality and humanity, expressing abhorrence at the use of such indiscriminate weapons of mass destruction.

Not though the war planners in the US. It was President George W Bush who openly declared a “first strike doctrine” and the incumbent Commander-in-Chief Barack Obama has maintained that doctrine, despite in our Orwellian world of having been awarded the Nobel Peace Prize in 2009.

In the 70 years since the end of the Second World War, the US has waged war, overtly and covertly, against upwards of 70 countries.

Estimates of the death toll from American wars and subversions run to 20 to 25 million, in countries ranging from Latin America, Africa, the Middle East and Asia. No other country, including Nazi Germany, has been responsible for the death and destruction on the scale that the US has inflicted.

© AFP 2020 / US NAVY
US Takes Warmongering to the Next Level With Missile Defense Test in Europe?
The warmongering and death continue to this day with smoldering ruins in Afghanistan, Iraq, Libya and Syria, where the US has “perfected”
the art of outsourcing subversion to terror networks under the banner of “Islamic extremism”. These extremists have killed God-loving Muslims and Christians in their demonic purpose, unleashed with the help of the US and its European, Turkish, Arab, Zionist allies in the “great game” of regime change and geopolitics.

The skeptics and brainwashed will dismiss such claims as outlandish conspiracy. The United States, they will say, is the “land of the free” and champion of democracy, human rights and international law.

Well, such apologists need to focus on the reality that the US has not only used nuclear weapons, it has plans to use them again against anyone whom it designates as enemy. The skeptics and brainwashed need to stop accepting the self-righteous, deified self-justifications and focus on the fact: the US rulers appoint themselves the right to wipe out human beings.

We may, however, still hope that nuclear weapons will never be used.That indeed some day these barbaric mass-killing devices will be forever banished and that our technological prowess will be turned into peaceful means for improving the wellbeing of humanity and our one, shared planet.

© CC0 / NNSA / Nevada Site Office / The BADGER explosion
US Nukes Leave 'Legacy of Death on American Soil'
At Christmas time we might hold on to hope and inspiration for human transcendence over poverty, war and suffering. But that hope should not be blind to the evil existing in our world. The evil of man-made injustice and oppression of others.

It is by no means “anti-American” to say this. But the greatest evil we face today are those rulers in the US and their global outposts who presume to wage wars for “political” reasons, in order to maintain their wealth and privileges over the rest of humanity.

The very fact that these people and their institutionalized mentality were, and presumably still are, prepared to wipe out humanity with nuclear weapons is their indictment.

People of goodwill must unite and overcome the nefarious structure of our world, whereby a tiny elite hold the great majority of humanity to ransom. Humanity is much better than that, deserves so much more than that, and is, potentially, destined for much, much more that.