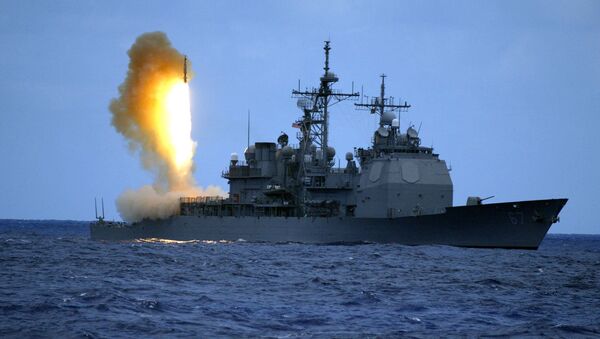 Four US warships along forces from eight other nations will take part in the first missile defense exercise in Europe, the Stars and Stripes newspaper reported, citing unnamed sources in the US 6th Fleet.

US Moving Ahead With Regional Missile Defense Systems Despite Iran Deal
The collective missile defense system, which has both seaborne and land-based components, is still under development to counter the overhyped yet non-existent missile threat from Iran.

The participating troops from Canada, France, Germany, Italy, Norway, Spain, the Netherlands, the UK and the US will be tasked with intercepting an unarmed ballistic missile and an anti-ship projectile fired simultaneously from different locations.

The war-games are aimed at improving coordination when dealing with multiple incoming missiles in what is often referred to as integrated air and missile defense.

"The tactic relies on highly automated command-and-control systems, such as the Aegis weapons system installed on more than 30 Navy warships. The Navy uses the SM-3 missile to intercept ballistic missile targets," the media outlet explained.

Russia Calls on US to Abandon Plans to Place Missile Defense in Romania
Not much additional information is available with regard to the military drills of the Maritime Theater Missile Defense Forum member states. They are scheduled to be conducted later this month, but the sources did not reveal the exact date.

The location and the names of the ships have also not been made public but in January IHS Jane's reported that the demonstration would take place off the northwest coast of Scotland.

The upcoming missile defense test will be the first one the US Navy will hold in Europe.