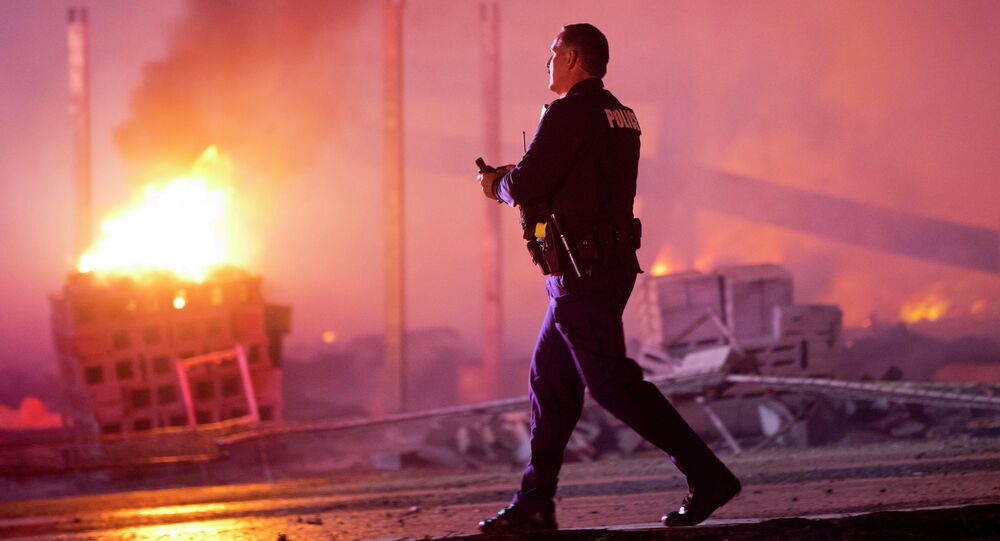 Not Racist Policing, But US State Oppression is Key Issue

Of the three cops charged over the death of African-American man Freddie Gray, media hand-out photos show that three of the arraigned officers are themselves of black ethnicity or "people of colour".

© REUTERS / JIM BOURG
National Guard Moves Armored Vehicles into Baltimore, Troops Authorized to Use Weapons
The brutal death of 25-year-old Gray from a severed spinal cord while in police custody has become the latest symbol of racist policing in America.

Amateur video footage shows the young Baltimore man being hauled into a police van, limp and in agony, moments after his prone body on a sidewalk had been knelt on by at least two officers. Gray died a week later on April 19, with an autopsy showing that at least three of his spinal vertebrae had been crushed.

Maryland state attorney Marilyn Mosby has concluded that Gray's death was homicide and she has moved to bring criminal charges against all six police officers involved in the man's arrest. He had, by the way, been arrested for no probable cause, or as some witnesses said because he merely "looked at the cops the wrong way".

All across America, thousands of indignant citizens — black, white, latinos and others — have taken to the streets over the past week to proclaim "Black Lives Matter" and to denounce "racist policing". One protest banner read: "End America's Blue KKK" — comparing the blue-uniformed law-and-order force to the white supremacists of the banned Klu Klux Klan.

© AP Photo / Patrick Semansky
Baltimore Riots: Police Officers 'Did Nothing Wrong' - Lawyer
But what do we mean by "racist policing" when three of the officers charged over Freddie Gray's killing are themselves non-Caucasian?

Moreover, the public face of Baltimore's police force has emerged as senior officer Anthony Batts — an African-American — who has been leading the forces's media response.

The Maryland state attorney, Marilyn Mosby, who delivered the homicide charges on the suspected police officers in the Gray case, is also of African-American heritage.

Justice campaigners and the Gray family welcomed Mosby's decision to prosecute as a step in the right direction. Previous cases of black men dying as a result of police misconduct have conspicuously gone without any prosecution of the officers concerned, compounding the anger of civil rights and justice advocates. State attorney Mosby trenchantly declared that "no-one would be above the law" before her announcement on the filing of charges.

© AP Photo / Cliff Owen
Baltimore Demands Justice for Freddie Gray's Death – Mayor
Furthermore, it is noted that the mayor of Baltimore City — whose population is 63 percent black — is an African-American woman.

And while we are at it, let's go all the way to the top here to include President Barack Obama — the first elected black holder of the White House. Also only last week, Obama appointed another African-American, Loretta Lynch, as the US federal attorney-general — the highest law-and-order official in the country.

With African-Americans featuring prominently in the Gray case — from the prosecuting attorney to the three cops who are being charged over the man's death — what does it mean to accuse US police forces of racism? Some might ask, is it even appropriate to level the accusation given the circumstances of Baltimore?

These apparent contradictions in the Gray case are just that. The operative word is "apparent". That three police officers who allegedly meted out lethal force to Freddie Gray are themselves black should not distract from the fact that in the vast majority of cases black people are the victims of a largely white police force.

The deaths last year of Michael Brown in Ferguson, Missouri, and of Eric Garner in New York are much more typical of the circumstances surrounding police violence. Black men are 20 times more likely than whites to die from lethal police force. And, disproportionately, in such cases no officer is ever charged.

What we are dealing with is the structural nature of police violence and impunity in America. And a racial aspect of this structural problem is irrefutable. From stop-and-search practices on the streets, to traffic police harassment of "driving-while-black", to prison incarceration rates and ultimately the use of lethal extra-judicial force — the oppressive problem is predominantly burdened on African-Americans and people of colour.

However, it would be mistake to see the problem as merely a racial issue.

What needs to be addressed is the structural condition of oppressive state policing that is now prevalent in America. Last week, the Washington Post published an analysis of deaths at the hands of US police officers during the last 10 years. It reported that out of thousands of deaths over the past decade, only 54 police officers ever faced criminal charges, and most of those prosecutions resulted in the officers being acquitted.

The increasing militarisation of America's police force, from the deployment of heavy-duty weaponry to the use of "war on terror" tactical assaults on inner-city communities, seems to be the bigger issue that needs to be addressed. Black communities, being disproportionately impoverished and ghettoised, are at the front-line of this systematic police state violence.

But it is all marginalised communities within the US that are potential targets for the country's surge in militarised policing.

Growing poverty, social exclusion and the erosion of civil liberties for all citizens across the US go hand-in-hand with this increasingly oppressive police power.

The debate over racist policing in American needs to be broadened to confront the general state of oppressive policing that is directed against all those — the majority of the population — who are increasingly disenfranchised by an oligarchy where one per cent of the nation owns nearly 90 per cent of the total wealth. That polarisation of wealth and massive impoverishment of the majority is itself a form of state violence inflicted on the nation; and the police are the front-line enforcers of this systematic violence.

© Flickr / Vladimir Badikov
Official Chinese Press: Baltimore Riots Reveal Lies About US 'Equality'
The fact that three police officers implicated in the brutal death of Freddie Gray are non-whites; the fact that the police chief and mayor of Baltimore are African-Americans; the fact that government attorneys are black; and the fact that the president of the United States is also black, all that serves to show that the inherent nature of police state violence in the US is both structural and endemic. The problem of how America has now degenerated into an oppressive police state is thus the central issue.

Today over 2.2 million people are imprisoned in jails across America — an incarceration rate that is said to be the highest in the world.

Some observers have noted that the US has locked away more people in its jails than there were even during the supposed Stalinist despotism of the former Soviet Union. Now that is saying something about the Orwellian nature of life in present-day USA — the "land of the free".