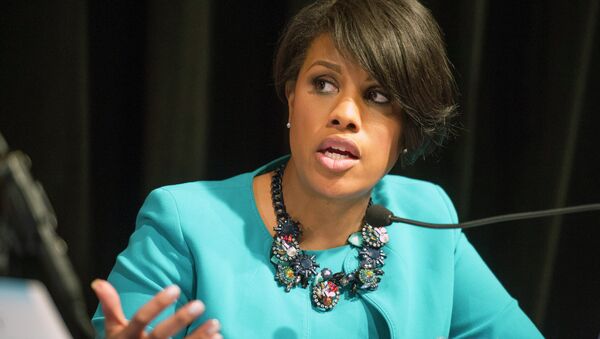 Freddie Gray Protests Spread Across US, Thousands March in Solidarity
WASHINGTON (Sputnik) — The people of Baltimore deserve to know what happened to Freddie Gray who died under unclear circumstances of spinal injury while in police custody, Baltimore Mayor Stephanie Rawlings-Blake said in a Twitter message on Thursday.

“Our entire city deserves answers,” Rawlings-Blake stated. “We will remain vigilant on this path to justice.”

The family of Mr. Gray wants answers. I want answers. Our entire city deserves answers. We will remain vigilant on this path to justice.

On Thursday, Baltimore Police Commissioner Anthony Batts said the police turned over the investigation into Gray’s death to the US state of Maryland Attorney General’s office to examine the circumstances of the incident.

Fabricated Freddie Gray Rumors Swirl in Absence of Official Information
Gray, a 25-year-old African American, was arrested on April 12 and died a week later as a result of severe spinal injuries he received after he was arrested by police. Gray had a lengthy criminal record of drug-related charges.

Following Gray’s funeral on Monday, a wave of protests that turned into riots erupted in Baltimore. Protests followed in other cities including Washington, DC and New York City.

Local media has been questioning the Baltimore Mayor’s decision not to address the crowd during the riots. Rawlings-Blake said in an interview on Thursday she did not want to insert herself in a potentially hostile situation.

The Baltimore riots prompted Maryland’s Governor Larry Hogan to declare a state of emergency and deploy thousands of National Guard troops to quell the riots.

Rawlings-Blake announced a week-long curfew, forcing most Baltimore residents to stay off the streets from 10 p.m. until 5 a.m.