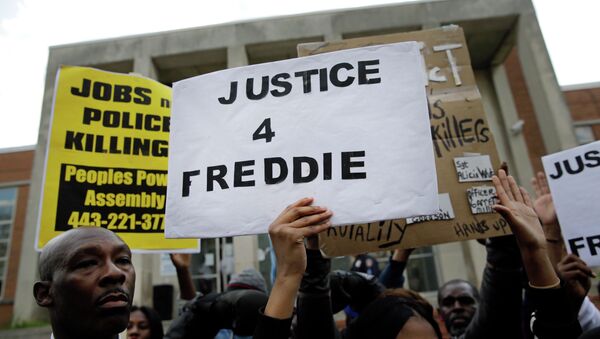 © AP Photo / Patrick Semansky
Subscribe
At least two media outlets have begun spreading false reports and unsubstantiated rumors that Freddie Gray had "pre-existing" injuries that would vindicate the Baltimore police force - and many more are unquestioningly reposting them - all while official sources remain silent.

Baltimore Uprising: State Halts Civil Rights Protections for Those Arrested
Smears about victims of police brutality are nothing new. In the case of Michael Brown, they came from the police, releasing unrelated video of an incident of shoplifting. In the case of Tamir Rice, the 12-year-old with a toy gun shot by Cleveland police, they came from the media, publishing an article with disparaging and irrelevant information about the child's home life.
Even in the case of Freddie Gray, who died April 19 from as yet unexplained injuries sustained in police custody, many news outlets have felt his list of prior arrests is germane to the discussion over why he was killed after making eye contact with a police officer.

But the latest accusations — essentially making up stories from whole cloth — arguably take it to another level.
On Tuesday a site called TheFourthEstate.com published claims — reproduced in no other media outlet — that Gray (whose name the site mispelled in the original post) had undergone spinal surgery before his arrest, concluding that Gray caused his own death and "should have been at home resting, not selling drugs," an allegation that not even the BPD has made against Gray. 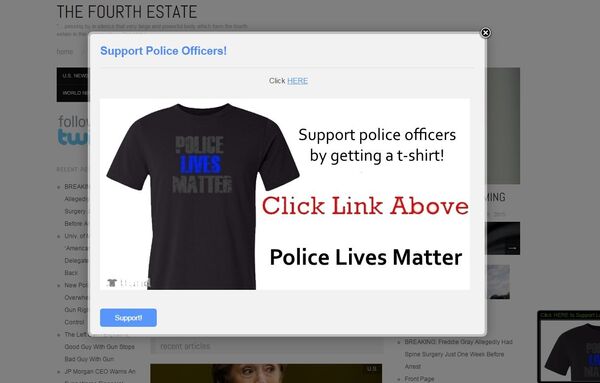 The Fourth Estate.com - who published the fabricated story about Gray's spinal injury - now prominently features a pop-up ad selling "Police Lives Matter" T-shirts. Not usually a good sign of are a trustworthy source in a story about a police killing.
© Screen shot
As "proof," the authors (who do not publish their names or any contact information) cited records from Howard County Courthouse, which they claim document a payout related to a car accident, the purported reason for the surgery.

The document images posted on the site do not mention an accident or spinal surgery, but the Baltimore Sun decided to look into the matter, and found that "the case had nothing to do with a car accident or a spine injury. Instead, they are connected to a lawsuit alleging that Gray and his sister were injured by exposure to lead paint."
Gray and both of his sisters were found to have elevated levels of lead in their blood as children, and filed a lawsuit in 2008 against the owners of the housing development they grew up in. The Grays' neighborhood of Sandtown-Winchester has a 7% incidence of children with elevated levels of lead in their blood. That's 7 times the citywide average.
But, in a perfect illustration of the old adage "A lie can make it halfway around the world before the truth even gets its pants on," the fabrication had already exploded on social media.

Delays Make Room for Lies
The spinal surgery fabrication was not the only one circulated in recent days. Baltimore conservative talk radio host Tom Marr also asserted, citing no sources, that Gray had injured himself — but this time in his initial escape from police.

Police & National Guard Enforce Citywide Curfew in Baltimore
"What I’m hearing is that in order to try to elude police, he jumped from a window, possibly as high as three stories,” said Marr.
Though the official investigation had not yet been released, information given by the police department in news conferences has made no mention of any such fall. Marr did not say where he was "hearing" this from.
While repeating that "We just don’t know answers yet," Marr didn't let that stop him from asking "Did [Gray] have a pre-existing condition?" or saying he heard that Gray "hit an 18-inch wall or something and fell over."
Marr also spoke mockingly of the Great Society reforms of Lyndon Johnson —  "Have all the babies you want, starting at 13, we'll pay for it!" — calling them "an utter and complete disaster," and citing them as one of the "reasons we saw what we've seen over the last few days in the city of Baltimore."
Commentators calling out these baseless stories are placing blame with the same silence and delay from city and police officials which sparked initial protests.
"[The police] make room for these lies to be told by stonewalling for days, weeks, and months and refusing to refute negative reports that favor their version of events while publicly refuting negative reports that make them look bad, " writes Shaun King at the Daily Kos.