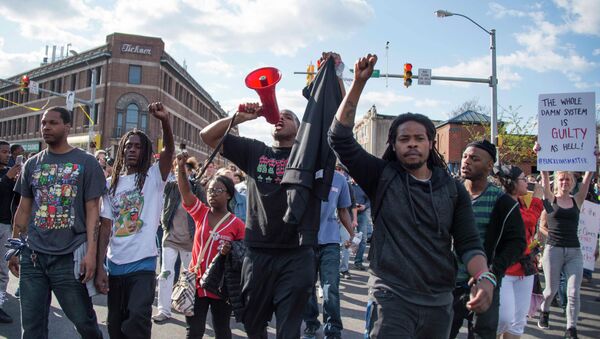 Massive Protests Shut Down Baltimore, Cities Across the US
MOSCOW (Sputnik) – Thousands of people took to the streets of US cities, as rallies following the death of Freddie Gray spread over the country.

Freddie Gray, a 25-year-old African American, was arrested on April 12 and died a week later as a result of spinal injuries sustained under suspicious circumstances while he was in custody.

Riots began Monday night in Baltimore following Gray's funeral. Thousands of activists held demonstrations in the city, calling for release of video footage showing the events that led up to Gray's injury during his custody.

Hundreds Arrested in NYC During Freddie Gray Rallies
At least 20 police officers were injured in riots as protesters threw bricks and other objects. As many as 144 cars and 15 buildings were destroyed in the rioting, according to the Baltimore Police Department. Around 200 people were arrested the first night, according to the local media.

Baltimore authorities issued a week-long curfew beginning Tuesday. People continue to gather despite the curfew, resulting in many arrests.

Following the Baltimore protests, many US cities took part in solidarity rallies against police brutality Wednesday.

Hundreds took to the streets of US capital Washington DC, as detailed by people on the scene posting to social media. Protesters blocked intersections in downtown Washington, DC on Wednesday evening.

A peaceful protest began in downtown Denver on Wednesday evening resulting in at least 11 people being arrested, according to the Denver Police Department (DPD), after a law enforcement employee was reported to have been assaulted.

Other misdemeanor arrests in Denver, for resisting police, disobedience to lawful orders, obstructing roadways, and interference, were specified by DPD on Twitter.

At least 100 have been arrested in New York after about 1,000 people gathered in downtown Manhattan, according to the WABC-TV channel. At least 2 law enforcement members were reported to have been injured.

More than 500 people took to the streets of Boston, the Boston Globe reported Wednesday. Protests there were largely peaceful, with police stating that no arrests took place.

According to the Star Tribune in Minneapolis, more than 1,000 people took part in a solidarity march in the city Wednesday. Like the Boston rally, the Minneapolis march was peaceful and no arrests were made. The protest was led by a group of men carrying a coffin, the media outlet reported.

Tonights thousands shut down downtown Minneapolis & the Hennepin Bridge in solidarity with the #BaltimoreUprising pic.twitter.com/JWKENlEALb

Around 50 people gathered in Houston, according to the Houston Chronicle.

Rally and march in indianapolis In solidarity with #BaltimoreUprising pic.twitter.com/sjCd6cLeOy

According to the St Louis Post Dispatch, hundreds gathered in the town of Ferguson Wednesday night to protest police brutality. On Tuesday, at least three people were wounded during protests, while police vehicles were vandalized, according to the media outlet.

Baltimore Uprising: State Halts Civil Rights Protections for Those Arrested
It is not understood how Gray received the injuries that led to his death. He was found unconscious when a police transport van arrived at the station. A prisoner sharing the police van with Gray claimed that the latter tried to injure himself intentionally by "banging against the walls," the Washington Post reported.

This is the latest wave of widespread anti-police-brutality protests in the United States. Police brutality and racial profiling have emerged into the spotlight in the United States after unarmed black teenager Michael Brown was fatally shot by a white police officer in August 2014 in Ferguson, Missouri, sparking weeks of unrest in the city. Many similar well-documented incidents have kept the endemic US social problem in the forefront of the nation's attention.