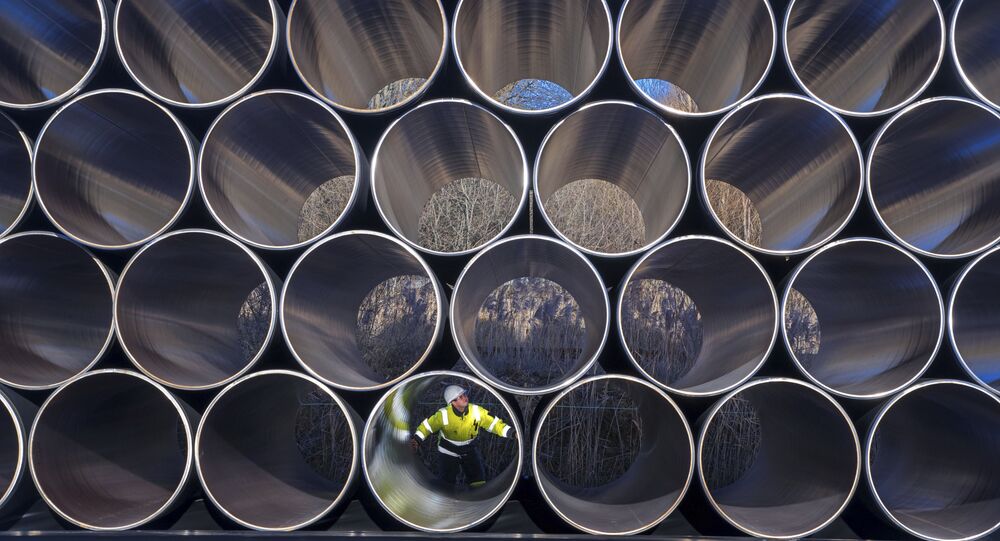 US Sanctions Against Nord Stream 2 'Encroach on Sovereignty of EU', German Lawmaker Says

Last Thursday, US Senators reportedly introduced a bill that would extend the scope of sanctions levied against Nord Stream 2 to include all companies that provide certification, insurance, and port facilities for pipe-laying vessels related to the project.

In an interview with the Russian newspaper Izvestiya on Tuesday, German politician from the party Die Linke (the Left) Klaus Ernst said that Berlin may respond to possible new US sanctions against the Nord Stream 2 pipeline project.

“The current US threat to impose extraterritorial sanctions [on the project] cannot be seen as an act of friendship. This encroaches on the sovereignty of Germany and the European Union”, Ernst, who is also member of the Bundestag Committee on Economic Affairs and Energy, pointed out.

He warned that “if this does not stop, we will have to consider serious measures in order to protect ourselves, for example, tariffs on American natural gas”.

The lawmaker was echoed by Timon Gremmels, member of the German Social Democratic Party (SPD), who told Izvestiya that the new US sanctions would not stop the construction of the Nord Stream 2 pipeline.

"The ban on operating the pipeline, which is being discussed in the US, apparently reflects Washington’s stance that Russia will be able to finish the project on its own. Germany, for its part, intends to observe and evaluate the further development of the situation so as to support the completion of Nord Stream 2”, Gremmels said.

German Free Democratic Party (FDP) member Martin Neumann, for his part, underscored that “when it comes to a sustainable energy market, Berlin should not be concerned about geopolitics-related issues”.

“This also applies to Nord Stream 2, which will reliably meet Europe’s gas demands. Despite the role of Russian [energy] supplies, the European gas market is very competitive, and I insist that EU countries should be more actively involved in this project”, Neumann emphasised in an interview with Izvestiya.

Markus Pieper, member of the European Parliament (EP) Committee on Industry, Research, and Energy, in turn slammed the US sanctions as “unacceptable interference in European energy and trade policy”.

He told Izvestiya that the European Commission should take a clear-cut position on “the problematic approaches” that the US practices in international trade.

US Reportedly Plans to Expand Sanctions Against Nord Stream 2

The German lawmakers’ remarks followed Bloomberg reporting last week that a bipartisan group of US Senators intend to introduce a bill that would take aim at insurance companies working with Russian pipe-laying vessels on the Nord Stream 2 project.

The bill was preceded by Washington slapping sanctions against the project to target any company or individual involved in providing services on the pipeline, and threatening to revoke their American visas and freeze their financial assets in the US.

The White House has repeatedly opposed the project, claiming that when completed, it would help Russia increase its political leverage over Europe. Moscow says that US sanctions will not derail the implementation of Nord Stream 2, and that it views such actions as a manifestation of unfair competition counter to international law.

Germany, one of the key members of the project, has consistently stressed the reasons behind constructing the pipeline are purely economic. In January, Chancellor Angela Merkel touted Nord Stream 2 as a "very important" project that will benefit not only Germany, but many other European countries.

Apart from Russian energy giant Gazprom, five European companies are involved in the implementation of the project, including France's ENGIE, Austria's OMV, the UK-Dutch company Royal Dutch Shell, as well as Germany's Uniper and Wintershall.