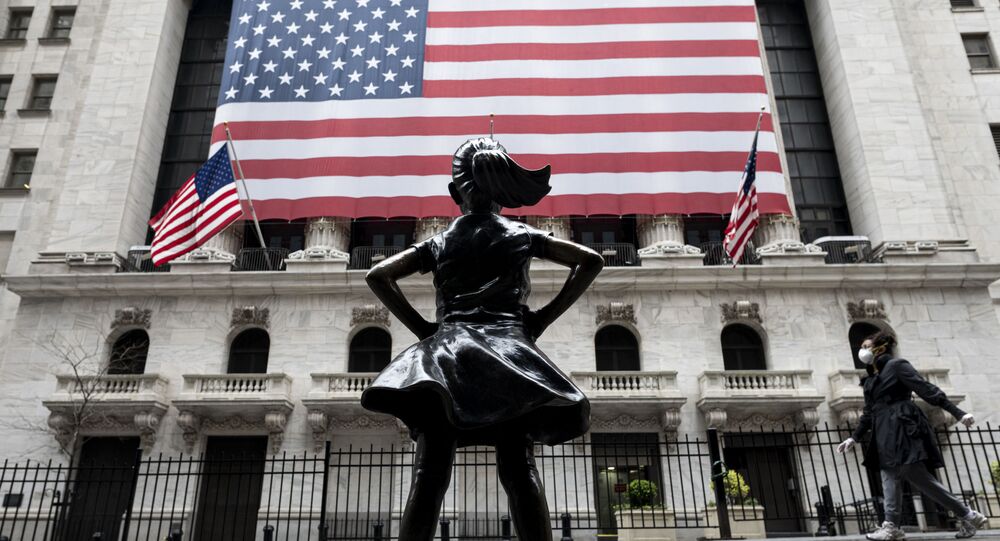 US stocks fell sharply on Friday, with the Dow Jones Industrial Average index plummeting more than 600 points after markets wrapped the month of April with their largest monthly percentage gains recorded in decades.

The day’s negative figures come just one day after the Dow Jones and S&P 500 finished April with their largest one-month percentage gains seen since January 1987. The Dow closed the previous month with gains of 11.1%, whereas the S&P 500 shot up by 12.7%.

The Nasdaq Composite, meanwhile, spiked by 15.5% in April - its biggest monthly gain since June 2000.

US markets shifted into negative territory as a result of disappointing earnings reports from tech giants Amazon and Apple, which further underscored the strong impact that the COVID-19 pandemic is having on global companies.

Amazon released its first-quarter earnings report late Thursday, revealing that it had made a total of $75.45 billion in revenues as homebound shoppers flocked to complete online orders on its platform. Its web services brought in some $10.22 billion.

However, its 26% spike in revenue from the previous year’s first-quarter figures came at quite the cost, as the company’s profits plummeted by 29% to some $2.5 billion. The loss of profits was mostly due to COVID-19-related expenses such as increased employee wages, strengthening its taxed delivery network to meet the spike in orders and, of course, purchases of COVID-19 testing kits and protective equipment.

But that’s not all that drove investors to worry. The e-commerce titan also reported that it plans to spend all of its profits for the second quarter, estimated to be some $4 billion, on its response to the pandemic.

To no one’s surprise, Amazon’s move led declining stocks on Friday, with its shares down nearly 8%.

And then there’s Apple, which reported quarterly earnings that exceeded expectations, but ultimately saw revenue growth remain somewhat flat on a year-over-year basis. The company also announced that it would be boosting its stock buyback program by $50 billion for the duration of the pandemic.

Additionally, the iPhone company did not issue guidance for its second quarter, which ends in June, a practice which Apple typically adheres to but also skipped earlier this year amid the spread of the novel coronavirus in China.

Brian O’Reilly, the head of market strategy for Mediolanum International Funds, told the Wall Street Journal on Friday that the plummet in shares is a “warning shot across the bow that no company is immune from this even if you’re able to raise your top-line revenues.”

Aside from developments in the tech industry, US markets were also affected by recent remarks made by US President Donald Trump, who indicated that he was considering the use of tariffs against China as a retaliatory measure over the spread of the coronavirus.

Following a signing event in the White House East Room on Thursday, Trump told reporters that he could impose tariffs on China, instead of canceling the US’ debt obligations as a punishment over the deadly outbreak.

“I could do it differently, I could do the same thing, but even for more money,” he said. “Just by putting on tariffs.”

Trump also took the time to state that he has seen evidence that COVID-19 originated in the Wuhan Institute of Virology, despite a report from the Office of the Director of National Intelligence concluding that the virus “was not manmade or genetically modified.”

James Ragan, director of wealth management research at D.A. Davidson, told CNBC that Trump’s remarks were concerning, as the “last thing you want to do in a recession is raising taxes.”

“There’s no policy that’s been crafted yet, but I think the market is reacting to that a bit,” he added.