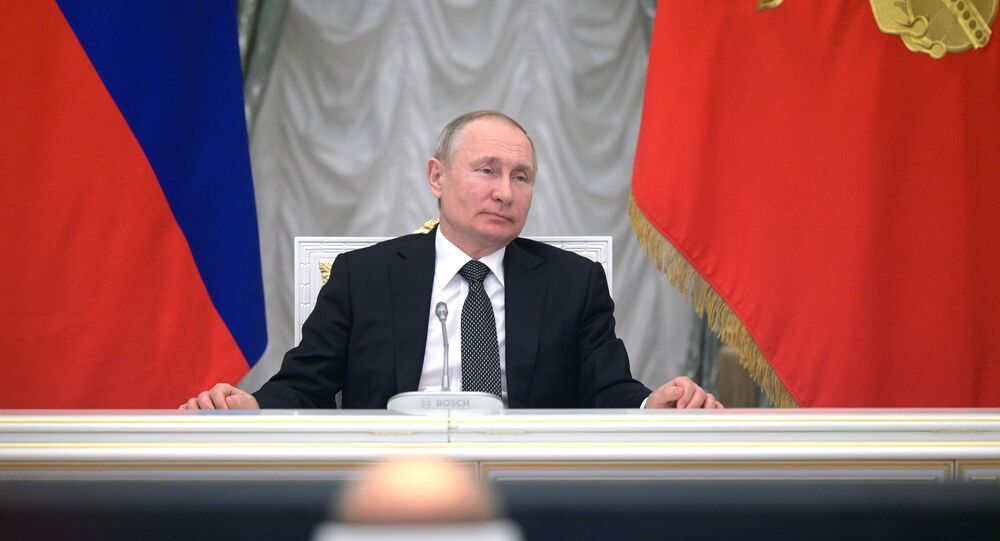 Putin on Current Global Markets Turmoil: It Creates Not Only Problems, But Also Opportunities

Monday's stock market drop was the worst correction since the 2008 financial crisis, with the Dow Jones Industrial Average seeing its largest-ever single day point drop in history, and oil futures shedding 20 percent amid jitters over coronavirus and OPEC+'s failure to reach a deal on production cuts.

Russian President Vladimir Putin has commented on the turmoil in global markets, including energy, saying the current processes create not only problems, but also opportunities.

"I'm not just hoping - I'm confident that Russia will go through this turbulent period with dignity and a sense of calm. Moreover, there is every chance for key Russian industries to come out of this situation much stronger and prepared for further, very serious competition. This, of course, should have an impact on the entire Russian economy, and be reflected in a positive way," Putin said, speaking to investors at his Novo Ogarevo residence outside Moscow on Wednesday.

According to Putin, the government and Russia's Central Bank have the resources to maintain stability, and their main task is to minimize the negative economic effects of the market crisis on ordinary citizens. The president added that the state would do everything necessary to guarantee the safety of national and foreign investments in Russia, and to minimize investment risks.

On Tuesday, Russia's Finance Ministry indicated that it did not expect an economic recession as a result of the global market downturn, and said that it had mechanisms in place to account for the loss of oil and gas budget revenues. The Ministry also calculated that the country's sovereign wealth fund has accumulated enough liquidity in the form of $150 billion in assets to compensate for lower revenues from oil even if prices remained at the $25-$30 a barrel mark for the next six to ten years.

Tuesday trading saw the Moscow Exchange Index drop by 10 percent, with major Russian companies including Rosneft, Gazprom, Lukoil, Nornikel, Alrosa, Sberbank and VTB Bank seeing share price drops of between 8.5-14 percent. The ruble also took a hit, dropping from 68 rubles to the dollar on Friday to 72 on Tuesday. A weaker ruble exchange rate means higher prices for imports such as automobiles, electronics, clothing, household appliances, pharmaceuticals and industrial equipment, but also opportunities for Russian industries in the domestic and export markets.

Global markets took a major beating on Monday amid coronavirus fears and the collapse of the OPEC+ agreement on production cuts, reportedly amid disagreements between Russia and Saudi Arabia on whether further cuts on top of existing 2.1 million barrel per day (bpd) cuts were necessary. Moscow reportedly refused to support an additional 1.5 million bpd cut proposed by Riyadh, prompting the kingdom to abolish restrictions, announce a discount on its April futures and declare a readiness to boost oil production to up to 13 million barrels per day, up from 9.7 million barrels per day currently.

© REUTERS / Hamad I Mohammed
The logo of Aramco is seen as security personnel stand before the start of a press conference by Aramco at the Plaza Conference Center in Dhahran, Saudi Arabia November 3, 2019
...
Reddit
Google+
Blogger
Pinterest
StumbleUpon
Telegram
WhatsApp
1153
Community standardsDiscussion