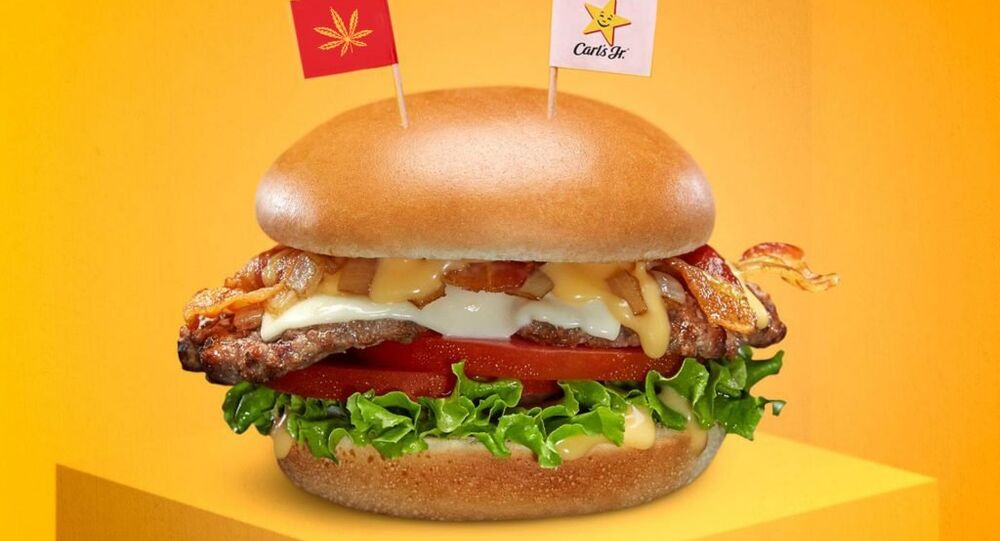 A US fast-food restaurant introduced the nation’s first cannabis-infused burger on Saturday and the $250 billion a year industry watched the successful event closely.

© AP Photo / Marcio Jose Sanchez
‘No Surprise’: Another US State Legalizes Pot
Tennessee-based Carl's Jr. became the first major US fast-food chain to introduce a cannabis (CBD)-infused burger, although the pot-laced edible product was only available — for now — in a state where the recreational use of marijuana has become legalized.

According to reports, the burgers were so popular that they sold out by late afternoon.

The Denver Carl's Jr. selling the CBD-infused food "had a full parking lot [and] people waiting in the drive-thru" prior to its 6:00 a.m. opening time, according to the fast-food chain's district manager Alex McConnell, cited by Leafly.com.

© CC0
South Korea - First East Asian Country to Legalize Medical Marijuana
"As soon as we opened the doors we had about 30 people in line and about ten cars deep [in the drive-thru] so we hit the ground running," McConnell said.

With the legalization of marijuana in the state for both recreational and medicinal uses, the giant fast-food industry is watching closely as the addition of a CBD-infused sauce on a sandwich sells well, according to Business Insider.

Carefully testing the waters of increasingly popular pot-related products, Carl's Jr. is the first major US fast-food chain to sell CBD-infused items on their menu, albeit at one place and for only one day.

After the fast-food chain successfully launched a Beyond Meat vegan burger in January, the legal team at Carl's Jr, were brought on board to carefully vet the potentially-controversial marijuana-based foodstuff, according to Business Insider.

Owned by publicly-traded California-based CKE Inc. (itself owned by Georgia-based private equity behemoth Roark Capital Group), Carl's Jr., like all businesses that legally grow, manufacture, distribute and sell pot and pot products in the US, must contend with current federal law that maintains the plant as a Schedule I drug in the Controlled Substances Act, the most tightly-restricted category, that includes heroin and cocaine.

© AP Photo / Nati Harnik
‘A Tangled Web’: Capitol Hill and Fed Keep Pot Outlawed as States Relax Laws
Carl's Jr. and sister brand Hardee's, both owned by Roark, are a dominant force in the American Midwest and South with some 3,800 locations in 44 states as well as many international outlets.

CBD is the non-psychoactive component of the marijuana plant and has been celebrated for a wide range of potential health benefits. Consuming CBD oils or products infused with those oils does not produce the well-documented ‘high' described by many who consume the leaves of the marijuana plant.

As CBD goes mainstream in the US, restaurants and retail chains, including the ubiquitous Walgreens and CVS drug stores, are signing deals to sell CBD-infused products to be used on the skin — called ‘topicals' — while CBD-infused desserts and edibles continue to eat up market share.