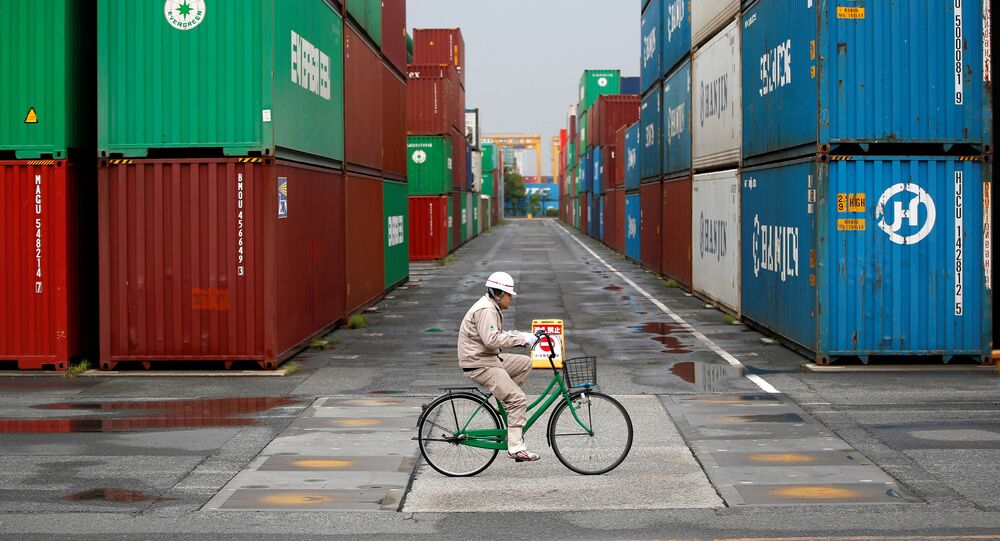 Japan posted a trade deficit last month after a surplus in April; overall exports rose, and the volume of trade with the US contracted amid stirrings of a global trade war between the US and Mainland China.

Kristian Rouz — Japan's foreign trade has continued to defy trade war anxiety last month, as the island nation's exports accelerated at their quickest pace in four months, driven by robust global demand for auto parts, cars, and semiconductor factory equipment. However, the Japanese trade surplus with the US slumped to its lowest since 2013 amid US tariffs on industrial metals.

According to a report from the Japanese finance ministry, the nation's exports rose 8.1 percent year-on-year in May compared to a 7.8-percent rise the previous month. The pace of outbound shipments outperformed previous expectations, as consensus expectations placed Japan's rise in exports at a 7.5-percent annual gain.

Japan's main export destination was Asia, with a 9.8 percent rise in shipments to that region — a 4-percent increase from April — while exports to Mainland China rose 13.9 percent year-on-year in May, or 3 percent up from the previous month.

This solid acceleration in Japanese foreign trade points to a broader economic acceleration in the second quarter of this year, meaning Japan's GDP growth rate is likely to rebound from its negative reading in the first three months of 2018.

"Exporters are more important and they are gaining traction steadily on the back of the global economy, even though they are not that strong," Takeshi Minami of Norinchukin Research Institute said. "Strong imports reflect strong domestic demand. So, I don't think a trade deficit is a bad thing."

© AP Photo / Andrew Harnik
New US-China Trade Spat 'Comes on Heels of a Lot of Paranoia About Beijing' - Prof
Japan's trade surplus with the US collapsed 17 percent, driven by an 18-percent decline in steel exports. This comes as US President Donald Trump and Japanese Prime Minister Shinzo Abe have pledged to continue their negotiations aimed at striking a mutually-beneficial trade framework agreement.

Additionally, the Japanese finance ministry said the slump in steel exports to the US is not immediately related to the US metals tariffs, as the reading reflects mainly the monthly dynamics in steel trading, and more data would be necessary to properly assess the effect of tariffs on Japan's steel industry.

"The overall trend is that export volumes are steadily growing, so trade continues to be doing well," Yuichi Kodama of Meiji Yasuda Life Insurance Co. said. "Looking at it by region, export volume to the US has growth of 6.8 percent, but it's worrying that exports to the EU are shrinking."

However, overall Japanese exports to the US still added 5.8 percent year-on-year in May, despite the narrowed trade surplus, which is also quicker than a 4.3-percent increase the previous month. Meanwhile, Japan's imports from the US rose a stunning 19.9 percent, driven by the trade in aircraft and coal.

"Exports will continue to recover, but I am a little worried about the pace of growth," Shuji Tonouchi of Mitsubishi UFJ Morgan Stanley Securities said. "Friction between the United States and China on trade policy could impact Japan. This is a risk factor for Japan and for global trade."

The recent rise in global oil prices produced a 14-percent rise in overall Japanese imports last month, while total exports rose only 4.2 percent compared to a 4.6-percent gain in April.

Japan's trade deficit also increased to $5.23 bln in May, compared to the previously-expected deficit of $2.6 bln. Meanwhile, in April, Japan posted a revised trade surplus of $5.65 bln.

China has also recently become Japan's largest trading partner, overtaking the US, which might concern the Trump administration. This comes as Tokyo and Washington seek to negotiate a trade deal, which would allow for increased imports of US agricultural and manufactured goods into Japan, whilst also reducing Japan's shipments of cars and increasing the shipments of hi-tech equipment to the US.

"The US will continue to press Japan for a bilateral trade agreement," Minami of Norinchukin said.

Such a deal would also bolster the bilateral political and military ties, backed up by a more solid economic foundation, whereas unhealthy competition and unfair trade practices have stirred a certain degree of misunderstanding between Washington and Tokyo over the past decades.