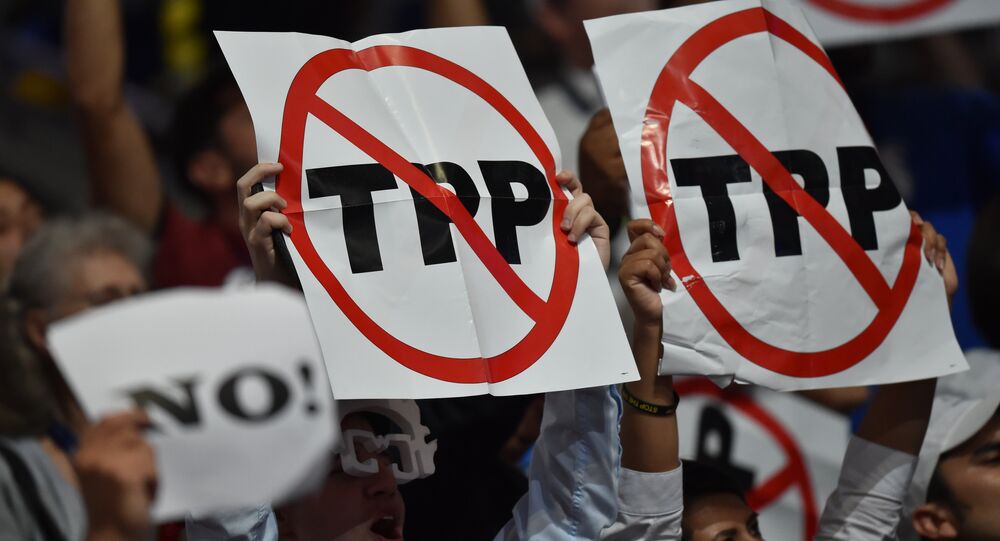 Sputnik discussed Trump's reversal on the TPP with Can Van Luc, senior adviser to the chair and senior executive vice president of the Bank for Investment and Development of Vietnam (BIDV).

Sputnik: What do you think has triggered Trump directing his advisers to look into negotiating the US' reentry into the TPP after Washington's withdrawal last year?

© AP Photo / Carolyn Kaster
Rejoining TPP Trade Deal Trump's Biggest Broken Promise to US Workers - Senator Sanders
Can Van Luc: I believe that it is a positive step. We welcome it in both an economic and political sense. However, Trump has pointed out on Twitter that this will only happen on conditions that are more beneficial for the US than during the [former US President Barack] Obama era. That means they seek new negotiations. Also, Trump changes his mind quite often. Last year he announced the US' withdrawal from the partnership and now he is talking about new negotiations, while other countries have just decided on signing the Comprehensive and Progressive Agreement for Trans-Pacific Partnership (CPTPP). This gives us the right to doubt the consistency of Trump's policies and rigidity of his statements. But, as I have already said, we welcome this move because the US is an important partner in general and in the CPTPP in particular.

If the US returns, there will be 12 members of the CPTPP, accounting for 40 percent of global GDP and 30 percent of world trade compared to 10-13 percent as of today. It is obviously a great contribution. Secondly, the partnership will be more influential with the participation of the US. And finally, it will be more appealing to other countries.

Sputnik: If the US rejoins the agreement, do you think the framework and the content of the TPP will change?

Can Van Luc: I believe it will, but not drastically. There are 20 clauses in the CPTPP with delayed enactment and negotiations on four clauses are ongoing. They are related to the spheres of interest of the US, such as intellectual property, environment, labor legislations and resolution of disputes, particularly between governments and investors. Of course, if the US decides to return, discussion of these clauses will be renewed.

The US may also demand negotiations on changing trade conditions in spheres of interest such as agriculture and steel industry. But I believe the finalizing process will be quite long and tense in that case.

Sputnik: There is an opinion that the US has made the decision in order to survive against China in the trade war. What do you think?

Can Van Luc: It is hard for us to judge President Trump's intentions, but we can assume that that was his intention when he announced that the US may reenter the CPTPP. It could be done in order to set additional terms so that the US would obtain benefits in a trade war with China now and in the future.