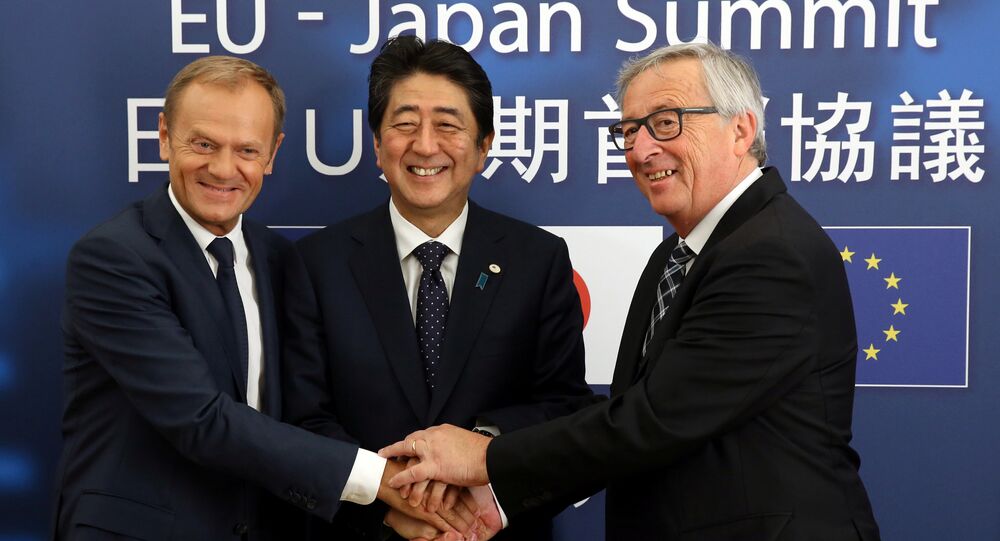 Japan and the European Union have agreed to strike a trade deal that would cover more than a quarter of the global economy. Some say the parties are seeking to polish their image as opponents of protectionism, however, Britain who is currently still part of the EU, will not benefit from the deal which will take at least three years to negotiate.

After months of tough negotiations in Tokyo, the four years of talks have come to an end, as the Japanese Foreign Minister Fumio Kishida arrived in Brussels Thursday, June 6 to meet with the EU trade commissioner Cecilia Malmstrom. Both sides have now agreed on a fair trade deal.

​"We have made significant progress in negotiations, but there are still important issues to be resolved. It's extremely important for Japan and the EU to fly the flag of free trade amid protectionist moves by reaching a swift outline agreement," Japanese Prime Minister Shinzo Abe said in a recent statement.

We did it. We concluded EU-Japan political and trade talks. EU is more and more engaged globally. Global Europe! pic.twitter.com/GhsRT2QihH

President of the European Council (EC) Donald Tusk has said that the deal showcases the importance of the EU and that Brexit should not make other countries think the bloc is unnecessary.

"In the context of the discussion about Brexit, we have heard statements claiming that it isn't worth being in the European Union, as it is easier to do global trade outside of the EU. Today we have shown that this is not true. The EU is more and more engaged globally, and ahead of the EU are negotiations with Mercosur countries, Mexico, New Zealand, Australia and others," President Tusk said.

The #EUJapan Economic Partnership Agreement will be the most important bilateral trade agreement ever concluded by the EU. #EUtrade pic.twitter.com/n0jEU0BZ5P

European affairs analyst Yannis Koutsomitis told Sputnik why the EU and Japan would both find the newly-struck deal beneficial.

"Well, first of all for European businesses and companies get access to a vast amount of public services in Japan and procurement and also, they will get access to the Japanese market in terms of food and agriculture. I think this is the main topic that both parties can benefit from since Japan has significant surplus on joint trade. Also Japan will get access to the European car market, as most of the tariffs that are now in place for Japanese cars plays out in the next few years," Mr. Koutsomitis told Sputnik.

However, the trade agreement is not all good news. The UK, which will be exiting the EU in 2019 — if Brexit negotiations go smoothly — may not benefit from the deal as it takes some time to set up. The Comprehensive Economic and Trade Agreement (CETA) took three years for instance, and therefore the likelihood is that Britain will have left the bloc already.

"If we take into consideration the time it took for the European and Canadian agreement, it took three years to finalize… I don't think that Britain will be in the EU by the time this new agreement will come into effect, so I think Britain will need to negotiate a new agreement, on new terms with the Japanese government," Mr. Koutsomitis told Sputnik.

This agreement sent a strong message to the world, Mr. Koutsomitis believes, as both sides placed a huge amount of importance on signing a fair trade deal — one which addressed environmental issues and was beneficial to both parties.

"Much significance has been placed by the European officials on having a fair trade which means there will be strict regulations on labor and on environmental issues. There will be a special clause that will describe how the two parties will enforce the Paris Agreement, so the political signal from European countries is that they want to have open trade with big countries in the world, but on the other hand have fair trade as well," Mr. Koutsomitis said.

What are the key elements in this #EUJapan agreement? Read more on transparency, the timeline and trade in services→ https://t.co/F212lQ9b0y pic.twitter.com/khgoZ7y5J8

​However, some critics have said that EU leaders may be giving up privacy for profits as the deal could erode the EU's digital privacy regime.

Data is a sensitive topic and is crucial for companies and banks. Under the current regulations, if a European business wants to sell products in Japan and store customer data such as card details, it needs to do so on Japanese territory and in Japanese servers. This ultimately increases the cost to businesses and is also the same for Japanese businesses operating in Europe.

"Well these are legitimate concerns and it will definitely be one of the most delicate issues that will be negotiated in the coming months […] the devil lies in the detail, but there is clear political will on both sides to have sound agreements that will pass all the 38 national and regional Parliaments of Europe after the adventures of the CETA agreement in Europe,"  Mr. Koutsomitis told Sputnik.