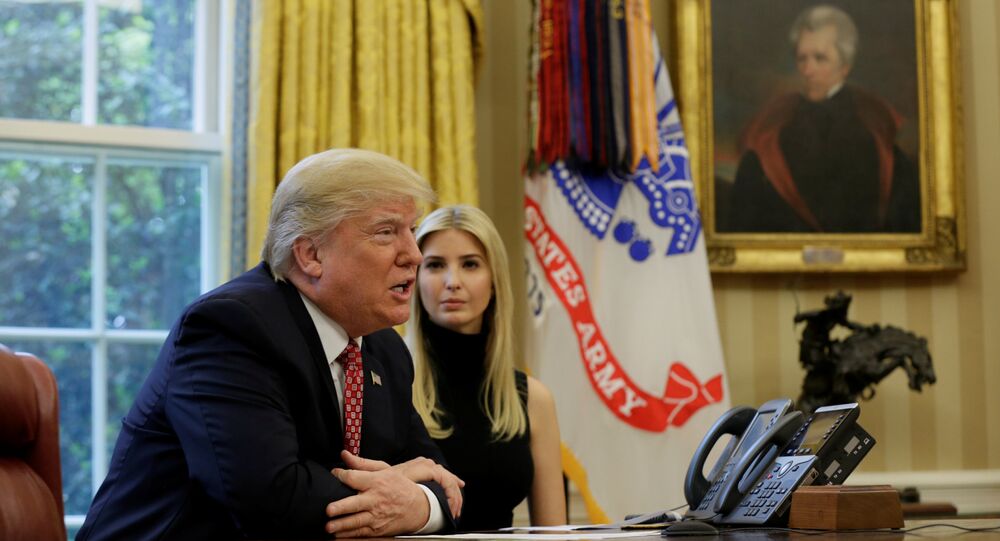 After Lacklustre Q1 GDP, Trump Reassures Economy Will Lift Off

US President Donald Trump expressed his confidence the US economy will accelerate to 4-5 percent annualized growth over the next few years after the fiscal stimulus and deregulation take effect. Until then, US economic growth is poised to be quite modest, at roughly 2 percent year-on-year.

Kristian Rouz — The US economy expanded by a dismal 0.7 percent year-on-year in the first quarter of this year, after having grown by 1.6 percent for the entire 2016, its slowest since 2011. US President Donald Trump, whose campaign promises included a significant acceleration of the economic growth, commented on the Commerce Department GDP report the next day after its release, saying that achieving a quicker sustainable growth will be a matter of several coming years.

Trump reiterated that his pledge of spurring the economy up to 4-5-percent annualized growth is still intact.

"I really believe it," Trump said in a Fox News interview. "We're saying 3 (percent) but I say 4 over the next few years. And I say there's no reason we shouldn't be able to get at some point into the future to 5 and above."

Whilst some market participants and observers were somewhat discouraged by the continued slowdown of the US economy in the first 100 days of the Trump administration, many investors are looking beyond the GDP data and at other macroeconomic indicators, such as inflation. With GDP figures being rather retrospective, monthly inflation reports provide a more flexible batch of data, allowing for forward-looking projections.

US inflation has broken above the Federal Reserve's 2-percent target, up to 2.3 percent in April, suggesting the consumer demand is poised to accelerate in the current quarter, whilst the US borrowing costs will go up quicker than previously expected. It was the sluggish consumer demand that weighed on GDP growth in the first quarter, but gains in core inflation and, more importantly, payroll inflation, suggest the economy will mildly accelerate even before the White House enacts its fiscal stimulus package.

"The inflation data is more important than the miss in other components," Anthony Cronin of the New York branch of Societe Generale SA wrote. "It puts more pressure on the Fed and comes on the back of the strong European CPI print this morning."

According to a separate report from the Bureau of Labour Statistics, US employment cost index rose by 8pc in Q1, its quickest pace of gains since 2007. With wage growth lifting off its decade-long stagnation levels, the outlook on household consumption is now brighter for the remainder of this year.

Domestic consumption drives roughly 72 percent of the US GDP.

Besides, the tax plan, proposed by Trump during this outgoing week, encouraged more optimistic forecasts on US business activity. Significant business and individual tax cuts are seen as supporting consumer activity, effectively staving off the possible spillovers of the Fed rising base interest rates. With more disposable cash at hand, many consumers will not have to rely on borrowed money to finance some of their purchases.

"The economic plan under Trump will grow the economy and will create massive amounts of revenues, trillions of dollars in additional revenues," US Treasury Secretary Steven Mnuchin said on Wednesday.

Yet, whilst the US economy is still anticipating the reforms promised by Trump, the pace of growth is going to be quite modest this year. The International Monetary Fund (IMF) currently expects the US economy to expand by 2.3 percent this year, but the Federal Reserve's reaction to the surge of inflation in the form of tightening the monetary policies might affect actual growth this year, the IMF warned.

"Financial markets are buoyant and expect … fiscal expansion and deregulation in the United States," the IMF said. "If confidence and market sentiment remain strong, short-term growth could indeed surprise on the upside."

Meanwhile, Trump said that lingering foreign trade deficits are hurting the US economic growth, and whilst the situation slightly improved in 1Q17 in this regard, the international trade still poses challenges to the US. There are also structural challenges, such as low labor productivity, the IMF warned. With the fiscal reform package still on its way, it might be derailed by partisan politics in Washington.

Until after the fiscal reforms pass the Congress, the US annualised growth will hardly surpass about 2 percent, which is far below Trump's aim.