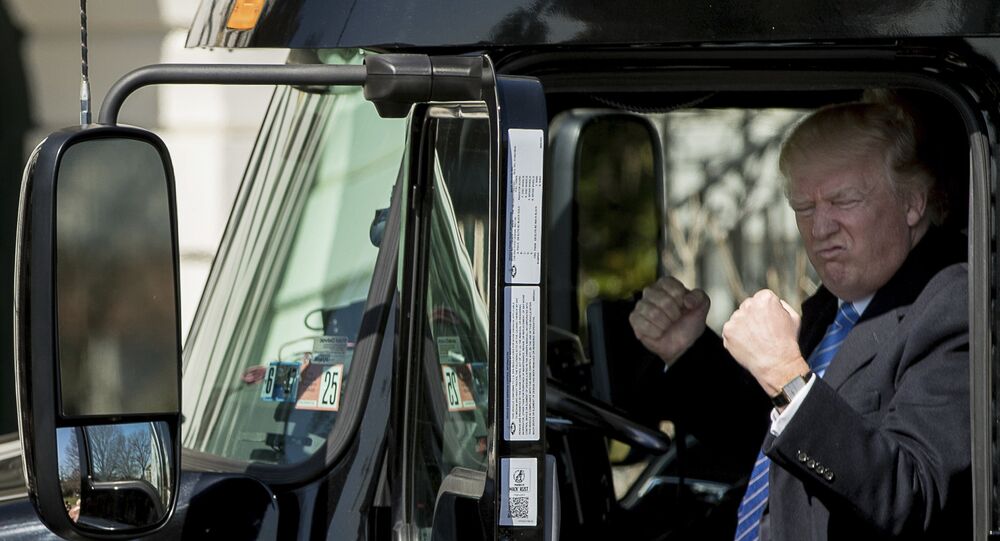 As US President Donald Trump closes in on the much ballyhooed first 100 days mark, questions remain about his effectiveness, as the president comes up short on his litany of campaign promises.

Radio Sputnik’s Loud and Clear spoke with Yahne Ndgo from the Ubuntu Nation project, Sputnik News analyst Walter Smolarek, Kevin Akin of the Peace and Freedom Party and radio host Anoa Changa about Trump’s dubious accomplishments and how his presidency so far has been coloured by mass resistance.

​Changa said there has been "buffoonery on steroids coming out of the White House" in Trump’s 100 days, saying the deadline has been "a challenge to actually be what (Trump) claimed or portrayed that he was. He made all these grand pronouncements that were not grounded in anything factual."

She added, "We’ve seen how he’s built on certain things left behind for him by the Bush and Obama administrations, but in terms of carving out many of the key programs and promises that he said he would do, he’s done them, but he’s been knocked back, primarily by the federal courts. [He] also has met with widespread massive resistance all over the place."

Smolarek said that so far, the Trump presidency has been "an all-out attack on poor and working people," specifically the proposed federal budget which has "devastating cuts."

Smolarek noted that the Army will be receiving an additional$ 50 billion while essential social services for citizens most in need will be slashed. He also said that Trump’s American Health Care Act "is as much a gift to the insurance companies as Obamacare was; this would line their pockets even more. I think the policies have shown that this is certainly a government of the oligarchs, a government of looting."

Loud and Clear Host Brian Becker pointed out that the Republicans were not successful in their constant criticism of and attempts to repeal Obamacare. Trump took this up as campaign promise, despite the fact that the legislation was modeled after measures enacted by Mitt Romney, a Republican, when he was governor of Massachusetts.

Ndgo called this effort, "A throwback to the racism that was demonstrated during Obama’s presidency. This is very specifically about Obama as a president and their insistence on not supporting anything that he did, and not allowing him to have any piece of his legacy, him being a black man as well a Democrat."

She added, "So it has nothing to do with the Affordable Care Act [Obamacare] itself because it is a much more conservative measure than what we would have expected to come out of that environment."