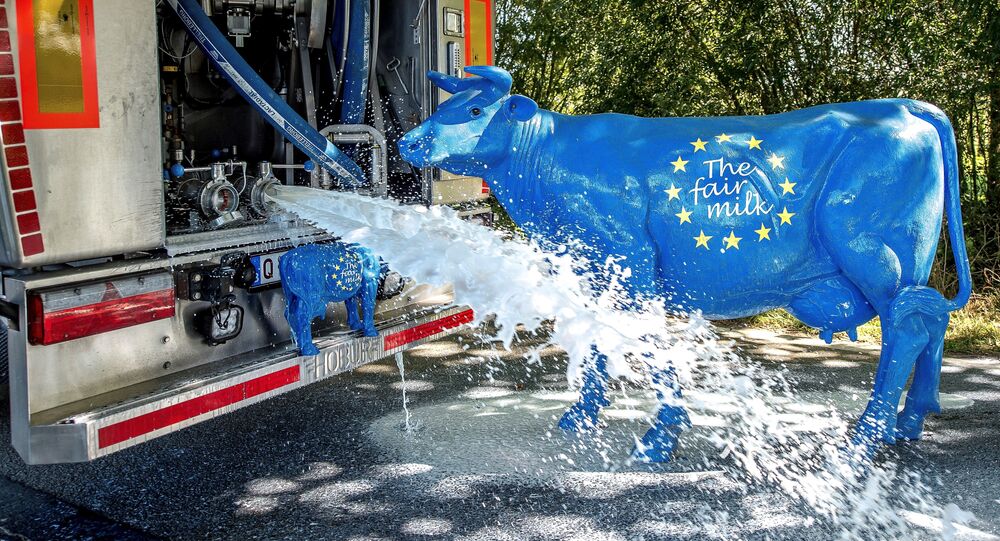 The Land of Milk Needs Money: EU Dairy Farmers in Disarray Over Glut

EU dairy farmers are already struggling with low prices; the current milk surplus in the US could prove disastrous for the European industry if it becomes part of the Transatlantic Trade and Investment Partnership.

© East News
Got Milk? US Farmers Dump 43 Million Gallons Down the Drain So Far in 2016
Last week the US press reported that a milk surplus in the country has led dairy farmers there to dump more than 43 million gallons' worth of milk into fields, manure lagoons or animal feed.

Dairy farmers there are also experiencing a surplus of cheese, as a result of which the US government has agreed to spend $20 million on purchasing cheddar from farmers, the second such intervention in the last three months.

Farmers in the EU are also suffering due to low prices as a result of the removal of quotas on milk production, as well as the effect of Russian counter-sanctions.

In April the EU Commission eliminated the milk supply quotas which had been in place since 1984. This was followed by a 24 percent drop in prices over five months, leading dairy farmers to protest the move.

According to the EU's statistics office Eurostat, in July the price of a liter of milk fell to a seven-year low of €0.2563, leading some observers to declare milk cheaper than water.

Rather than controlling milk production, the EU has opted to subsidize the industry, as in the US, rather than use direct market interventions such as quotas. In mid-July it supported producers with a €500 million subsidy.

However, removing the production quota and making the dairy industry dependent on subsidies leaves it vulnerable to the proposed Transatlantic Trade and Investment Partnership (TTIP).

© Flickr / Dave Wild
No Milk and No Roses: Swedish Dairy Farmers Crushed by Sanctions
This secretive trade deal aims to remove tariffs and regulatory barriers between the EU and US, where there are lower taxes, cheaper labor and less regulation.

For example, some cows in the US are injected with bovine growth hormone (BGH), a man-made hormone which can increase cows' milk production. Its use is prohibited in the EU, but was approved for use by the US Food and Drug Administration (FDA) in 1993.

EU tariffs on dairy products remain relatively high, and could be targeted by US agricultural business seeking to remove economic supports for 'non-competitive' farmers in the TTIP.

"The United States is a competitive dairy exporter, pushing other countries to remove tariffs aggressively in previous Free Trade Agreements. In contrast, the EU has been reluctant to include dairy in trade agreements, and excluded dairy even when negotiating with inefficient dairy producing countries," the think tank Farm Europe reported last year.