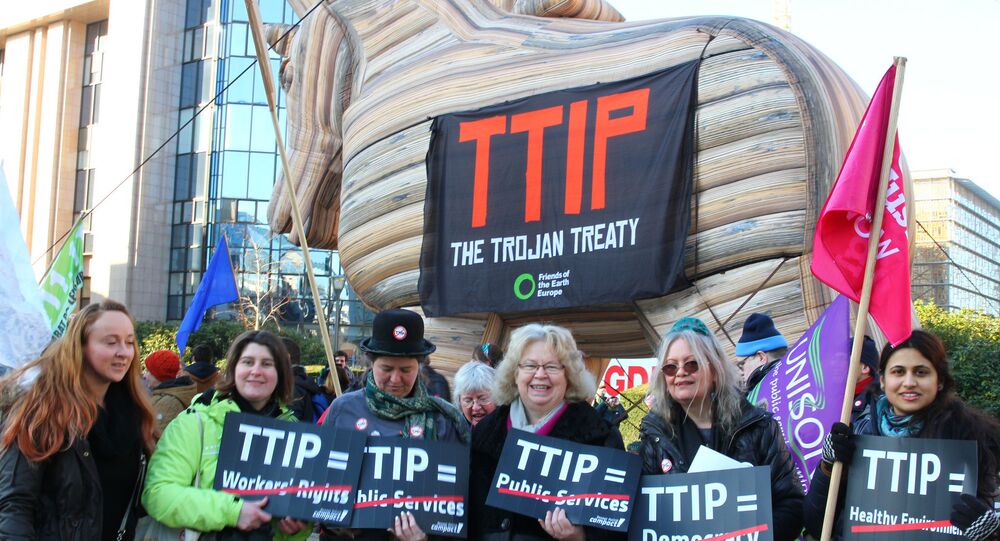 Leaked copies of the confidential negotiation documents on the Transatlantic Trade and Investment Partnership (TTIP) obtained by the German media, reveal that the US is putting significantly more intense, far-reaching pressure on the European Union than previously thought in order to get access to the European market.

© AFP 2021 / Philippe Wojazer
Joining Hands: French President and Ministers Hold Ground Against TTIP
According to the documents, Washington is threatening to prevent the easing of exports for the European car industry in order to force Europe to buy more US agricultural products.

The secret papers, consisting of 240 pages, have been obtained by Greenpeace and later provided to the German Süddeutsche Zeitung newspaper and the German radio and television stations WDR and NDR.

Among others, the papers reveal that Washington was blocking European car exports into the US to force the 508-million-population EU to buy more environmentally risky US farm produce, the newspaper says.

“The US government concurrently has criticized the fundamental prevention principal of the EU Consumer Centre which protects 500 million Europeans from consuming genetically modified food and hormone-treated meat.”

© Flickr / THOR
In a Cheese Trap: US Reaps the Fruits of Its Anti-Russian Sanctions
Genetically modified foods are mostly prohibited within the Europe Union.

Both sides have often stressed up until now that the US will respect European concerns in this matter, and that Europe’s citizens do not have to be worried about this issue, the newspaper notes.

However the confidential material paints a very different picture of the situation.

“It is really quite interesting to see the demands the US has made,” the outlet quotes Klaus Müller, chairman of the Federation of German Consumer Organizations as saying while evaluating the documents.

“Perusing the documents has shown that nearly all of our fears regarding the US’ TTIP intentions for the food market have been proven to be justified.”

The EU bans products such as hormone-treated meat or genetically modified food as a precautionary measure if only the slightest hint of risk emerges, whereas the US only bans them if people have already been harmed as a result of consuming said products.

© Flickr / Global Justice Now
Majority TTIP Opponents Left Out of Latest Negotiations Round in New York
The EU's principle that goods must first be certified as safe has often been cited by the EU to constrain imports of American gene-manipulated and hormone-treated produce.

Hence by blocking an easing of car exports into the US, Washington wanted the EU to replace its precautionary consumer safety principle by the liberal US approach of permitting foodstuffs until risks are proven, the media outlet suggests.

The German outlets said the documents disclosed by Greenpeace also showed that the US was blocking an EU demand that arbitration panels to handle corporate lawsuits be public not private as sought by Washington.

“The documents further reveal the fact that the US has blocked the urgent European call to replace the controversial private arbitration tribunals, responsible for corporative lawsuits, with a public State model; instead, Washington has made a suggestion on the matter that had hitherto not been disclosed to the public,” Süddeutsche Zeitung  says.

US legislation is fundamentally different than that of the EU, the newspaper notes.

“In the EU, for example, the use of 1,308 various chemicals in cosmetics is prohibited in light of suspicions that they may be carcinogenic. The responsible US authority on the other hand, according to consumer protection organizations, prohibits no more than exactly 11 substances.”

“It will severely complicate legislation in environmental and consumer matters should the Americans assert themselves in this matter,” the outlet quotes Markus Krajewski, Professor of Public Law in Erlangen as saying in regard to the currently published suggestions made by the US.

Greenpeace said it would publish the material later on Monday, contrary to strict secrecy maintained by US and EU negotiating teams during three years of talks on the proposed agreement.

The publication of these TTIP documents, Süddeutsche Zeitung  says, “provides citizens with an unfiltered insight into the negotiations between the US and Europe.”

Ever since the start of negotiations three years ago, the public could only try to guess what both sides were discussing, which has prompted millions of people to take to the streets in protest of TTIP.

“Washington utilizes this tactic to ensure a larger scope for negotiations. The disclosure of these 16 TTIP negotiation papers finally offers a fuller transparency for the 800 million people spread over two continents whose lives will be affected by the biggest bilateral trade agreement in history,” the newspaper says.

Another German media source, Deutsche Welle noted the urgency sought by German and American leaders regarding the agreement.

“Obama said he hoped it would the talks would be concluded in 2017, beyond the next US presidential election due in November this year,” it says, adding that the lead US and EU negotiators — US Trade Representative Daniel Mullaney and the European Commission's Ignacio Garcia Bercera — said they hoped to reach a deal before Obama leaves office in January.