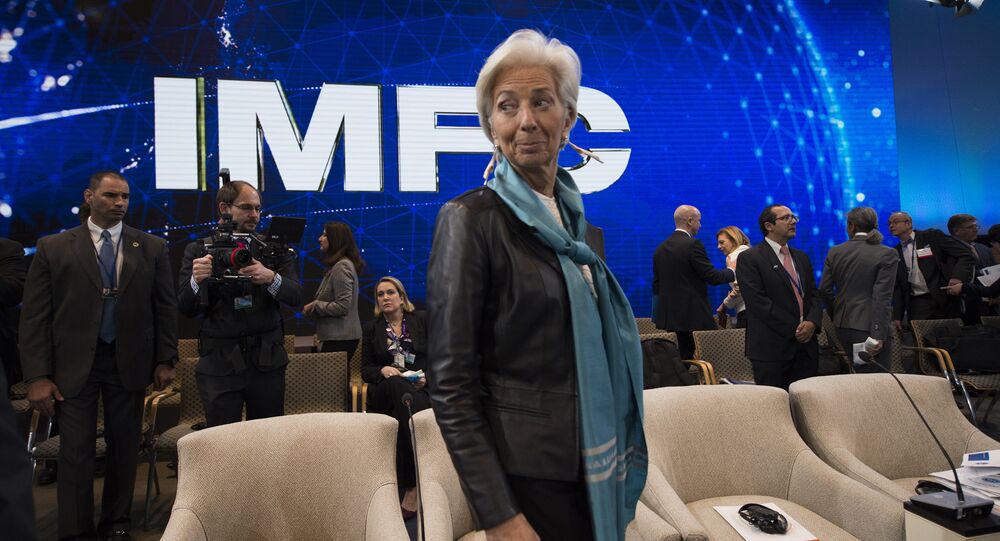 The annual meeting of the International Monetary Fund (IMF) and the World Bank Group is due to start in Washington on October 7. This year, the meeting is overshadowed by a rise in opposition to its cherished policy of globalization.

Radio Sputnik's Loud & Clear producer Walter Smolarek noted that, on one hand, the economy of the West has not completely recovered from the recession of 2008-2009, despite significant measures taken by financial regulators. These measures have resulted in only temporary fixes that have failed to return the global economy to where it was prior to the recession.

Those countries, such as BRICS members, that could count as real engines of post-crisis world economic growth have had a "very rough few years," Smolarek says, due, in part, to low commodity prices. A dramatic oil-price drop caused a cascade of other negative economic effects in those countries.

Smolarek notes, however, that when Lagarde speaks about a "weak and fragile" economy, she is speaking about the top of the economic food chain, primarily the largest financial institutions and multinational corporations. But these entities, when faced with challenges, simply divert the negative economic impact down the chain, where the working class suffers the effects. For the working class, however, the IMF offers no solutions and, indeed, hardly addresses the issue as relevant to their message.

© Sputnik
Stop TTIP! A 'Good Starting Point' for Rising Left Movements in Europe
Paradoxically, many large-scale multinational corporate entities have benefited from the crisis, Smolarek says. For example, for large banks, "the Great Recession was great," because it allowed them to acquire bankrupt competitors at "fire-sale" prices.

Every time an economic crisis occurs, the global economy eventually stabilizes, but at the price of the working class, as workforces and salaries are routinely cut, contracts are revised downward, and other drastic measures, including a loss of social support and healthcare, are taken to keep the big players in the Western economy afloat, Smolarek notes.

Asked whether there is a solution that realistically benefits workers, Smolarek said that politics is ordinarily the driver for who gets the best bites, and political donations influence legislation. Workers must fight for their share of the GDP, and the workers' union is a very effective tool in that struggle.

Without a change in how wealth is defined, aggregated and distributed, he asserts, the one percent at the top are likely to increase their control of resources, and that is happening right now. According to Smolarek, 62 of the world's richest people currently own as much wealth as the poorest half, or some three billion people, in the world.

"There's a vast, vast abundance that is hoarded by a very small clique of people."

© REUTERS / Toby Melville
May Wants UK Brexit Deal With EU to Include Free Trade, Anti-Terror Cooperation
There clearly exists the likelihood that those who control the overwhelming share of the planet's resources are effectively making decisions that affect the health, and the future, of the world's economy, Smolarek suggests.

The ultra-wealthy, however, are contributing to the ongoing economic decline, sparking a growing wave of resistance toward globalization. The most radical example of this resistance is the UK Brexit, he pointed out. There are other countries sharing similar sentiments, to some degree, finding realization in the form of tariffs, trade taxes and other forms of protectionism, Smolarek notes. Protectionism, a driver for sovereign economic health, was sharply criticized by Lagarde during her opening speech in Washington, indicating on which side of the economic aisle lie the sympathies of the IMF.

© AFP 2021 / MANDEL NGAN
IMF Sets Interest Rates to Zero for Low-Income Countries Through 2018
Globalization has become a sharply defined issue, notes Loud & Clear host Brian Becker. Those on the left insist that globalization and integration is not about competition without borders, but about a total resource takeover by multinational corporate entities. Those on the right, however, claim that, among other benefits, globalization is about having an influx of immigrants who will work virtually for free.

Smolarek believes that people from the right are "turning the reality on its head," as worldwide deregulated-trade agreements, like TTIP or TPP, are about, in part, preventing immigrants from taking over the West. According to Smolarek, these agreements will, if ratified, instead allow Western multinationals and financial institutions to enter other markets without regulation, resulting in exploited labor markets and the stripping of national resources to an extreme degree.